The new rock museum houses around 35 different types of rocks from different parts of India with ages ranging from 3.3 billion years to around 55 million years. 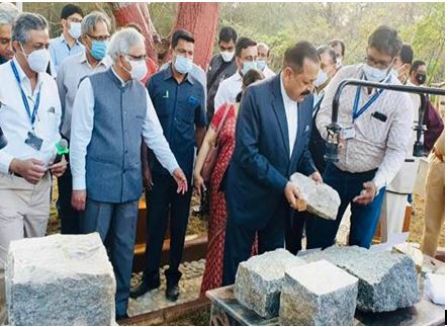 The new rock museum on the campus of Council of Scientific and Industrial Research-National Geophysical Research Institute (CSIR-NGRI), houses around 35 different types of rocks from different parts of India with ages ranging from 3.3 billion years to around 55 million years. It aims to educate and enlighten the masses about the lesser-known physical properties of the earth and its surrounding environment.

“One of the recent decisions we also took, because we are going through the 75 years of independence, was, that we would have 75 science museums across the nation. We entered an MoU with the Ministry of Culture for this project about two months ago”, Minister said.

He noted that Big Earth data occupied the strategic high ground in the era of knowledge economies and said that India is fully exploiting this new frontier contributing to the advancement of earth science. Geoscience is contributing significantly towards self-reliance and national priorities in new India, he added.

On the occasion, Dr Jitendra Singh also released earthquake risk maps of Lucknow and Dehradun cities and handed them to the representatives of Uttarakhand and Uttar Pradesh State Disaster Management Authorities. The maps have been prepared by NGRI considering the seismic vulnerability of the two cities. They are prepared by characterising the hazard and its uncertainty, to serve as input for risk assessment and earthquake-resistant design for different applications – ranging from private homes to multi-storied buildings and critical infrastructures such as bridges or dams.

The Minister noted that science blended with creative innovation brings ease of living for the common man and urged scientists to adopt out of box thinking to address the problems of the people. He said the expectations of society from scientists are ever-growing and scientists should continuously be involved in providing the best S&T solutions.

Dr Singh also recalled that while the country is celebrating its 75 years of Independence as “AzadiKaAmritMahotsav”, CSIR is celebrating 80 years of its foundation and said it was appropriate that all ministries and departments who are pursuing science should explore S&T innovations for making India self-reliant in different sectors. He emphasised that India should be a global leader in matters ranging from defence to economics with strong scientific and technological inputs in another 25 years when India celebrates 100 years of Independence.

Referring to CSIR-NGRI’s aim to focus on deep-earth and near-surface explorations to have a better understanding of the processes responsible for shaping Earth’s structure and dynamics, and for the sustenance of life on Earth, Dr Jitendra Singh expressed hope that with its charted vision and mission, CSIR-NGRI will play a vital and pivotal role in coming years to fulfil the aspirations of the nation.