It is crucial that serious action is directed towards saving the future of children whose vulnerability to exploitation and abuse has been escalated by the pandemic.

There would be huge impact of the ongoing COVID-19 crisis on poor families and their children. The 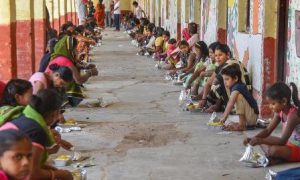 economic, health and social crisis emanating from the present situation can push millions of vulnerable children out of school and into the clutches of child traffickers. As the financial resources and meagre savings of low-income households begin to exhaust themselves, the exigencies of time require them to have multiple streams of income, no matter how low they are. This results in reliance on their children, who are viewed as an extra pair of hands, to assist in the pursuit of feeding the family. As a result, children from the affected families would be compelled to participate in economic activities to support the household income and some drop out of school due to the parents’ inability to afford fees.

It is well documented that once children stop going to school and start working, it becomes extremely difficult to get them back into classrooms. However, for several of these families, their child’s labour won’t just be an additional support; rather it will be the means for their survival. In many cases children have lost their parents and guardians, some have died because of the disease and others have lost their livelihood because of the shuttering of economic activities. Such dire conditions will push millions of children to seek work in the informal sector — at factory units, construction sites, agricultural fields and as domestic servants.

At present, there are 152 million working children between five and 17 years in the world, according to the data provided by the International Labour Organisation (ILO), of which 23.8 million children are in India. Out of these, the health and safety of around 73 million children are at risk due to their employment being characterised by hazardous conditions. Most of the official estimates on child labour in the country are based on the labour force surveys of the National Sample Survey Office (NSSO) and the Census. According to the Census data, child labourers between the ages of five and 14 had declined from 12.7 million in 2001 to 10.1 million in 2011. Furthermore, the total number of adolescent labourers in the country was almost twice at 22.87 million, bringing the total (5-18 years) to around 33 million. The National Sample Survey estimates also show that child labour has declined significantly from 10.1 million in 1999 to 1.4 million in 2017.

The education of children engaged as labourers will effectively come to an end due to their parents’ inability to afford their school fees as a result of unemployment and shortage of monetary resources. Faced with the stark reality of poverty and desperation, the poor often have to let go of the promise that education carries with it, that of social mobility. The lack of formal education robs them of possible opportunities and reinforces inter-generational poverty. It will simultaneously have a calamitous effect on the health and mental well-being of children as they are pushed into a world of hardships.

Moreover, there is also an increase in instances of child marriage among poor households as they are unable to afford the maintenance of all the family members.

The girl child is the first to bear the brunt of these reduced circumstances. While employed as child

labourers, girls are at a greater risk of sexual assault, human trafficking and prostitution. For instance, past experience shows that school closures during the Ebola virus’ outbreak in West Africa from 2014 to 2016 contributed to a spike in child labour. Additionally, the 1997 Asian financial crisis and the 2009 global economic crisis have also shown that more children are likely to be forced into child labour and trafficking, neglect, sexual abuse and teenage pregnancies, particularly in those countries that have little or no social protection, like India.

Another study from Nepal shows that paternal disability and death were among the strongest factors behind a child’s engagement in the worst forms of labour. The study also found that when household incomes or earning opportunities unexpectedly drop, child labour tends to increase. Further, according to a study by World Bank, girl students in Sierra Leone were nearly 16 percentage points behind in school attendance after losing an entire year due to the Ebola outbreak in 2015. The same study mentioned that secondary school enrolment fell by around 7per cent in the Philippines amid the Asian financial crisis of 1998-99.

At the peak of school closures in April, over 91 per cent of all learners had been asked to stay away from classrooms globally, according to the UNESCO. Their estimates show that around 320 million learners have been affected in India. A major chunk of these students were enrolled in primary and secondary schools (86 per cent) and do not have access to digital education.

Thus, for many of them, the COVID-19 crisis will mean limited or no classroom-based learning or falling further behind their peers. There is a high probability that many of these schoolchildren will get recruited as workers.

Over the last two decades, India has put in place a range of laws and programmes to address the problem of child labour. The Union Government enacted the Child Labour (Prohibition and Regulation) Act, 1986, to prohibit children from being employed in specified hazardous occupations and at the same time regulated their working conditions in other non-hazardous occupations and processes.

The 86th Amendment to the Constitution made in 2002 was a watershed moment in the country’s efforts against child labour. It made the right to education a fundamental right and made it the state’s responsibility to provide free and compulsory education to children between 6and 14 years. In fact, the Right to Education (RTE) Act, 2009, has made it mandatory for the state to ensure that all children aged between 6and14 years are in school and receive free education. In addition, the Child Labour (Prohibition and Regulation) Amendment Act, 2016, completely prohibits the engagement of children below 14 years in all occupations and processes. It also prohibits adolescents (14-18 years) from working in hazardous occupations and processes.

The Goal 8 of the SDGs agenda urges UN member states, employers and workers’ organisations, as well as civil society organisations (CSOs), to eliminate child labour by 2025 and forced labour, modern slavery and human trafficking by 2030. The Government of India has adopted these SDGs as a framework for its future developmental plans.

However, despite a plethora of efforts by the government and CSOs, a large number of children continue to be engaged in both non-hazardous and hazardous occupations due to implementation loopholes and economic compulsions.

The way forward: In order to address the challenges, policymakers and stakeholders should explore avenues to collaborate with CSOs such as NGOs and local voluntary organisations/individual volunteers, who could help state governments in reaching schools that aren’t equipped with technology based platforms like their private counterparts. This could potentially help in keeping children engaged through distance learning.

Furthermore, the strengthening of the Mid-Day Meal Scheme and providing food to children at their homes till the lockdown lasts could ensure that they don’t drop out of school. State governments must ensure that schools waive off their fee for the next few months. Added to this, the government needs to ensure income support and food security for the poor and vulnerable households, so as to minimise the helplessness of the families.

Lastly, steps should be taken to maintain a database of children at the local level so that their status can be reviewed periodically and immediate action from government and communities can be taken.

Responding to this impending crisis is the need of the hour or else we stand to lose a generation of children. This would push us further away from achieving the goal of eliminating child labour by 2025. Governments and policymakers need to be cognisant of the voices of children, especially in matters affecting their daily lives and their future.

It is crucial that serious action is directed towards saving the future of children whose vulnerability to exploitation and abuse has been escalated by the pandemic. All children possess the right to have a childhood. Putting this developmental issue on the backburner would have long-lasting consequences that could adversely affect the country’s future generations.

How Media Framed the Good and the Bad of COVID-19?