COVID-19 and High-Skilled Migration in the Health Sector

Despite a tilt towards higher skilled across professions, there is a preference on certain sectors such as healthcare workers during this pandemic.

There are several factors that impact high-skilled migration. Healthcare situation in the sending and receiving countries, economy and politics are some of them which is an outcome of a 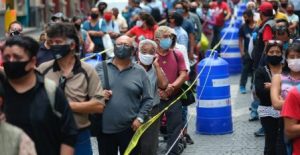 panel discussion jointly organized by The Global Research Forum on Diaspora and Transnationalism(GRFDT), along with The Centre for Research on North America (CISAN), UNAM, Mexico, organised a panel discussion on high-skilled migration, with a focus on the healthcare sector. The panellists in the discussions analysed and throw light on some of the critical issues related to healthcare in the context of COVID-19 pandemic, Indian migration to developed countries, global economic situation, etc.

Prof Camelia Tigau, Universidad Nacional Autonoma de Mexico, dealt with a particular case of medical personnel in Mexico during COVID-19 pandemic. She focused on Cuban doctors invited to work in Mexico during the pandemic. Medicine is one of the main occupations of skilled migrants in the U.S. There are about 10,000 licensed doctors of Mexican origin in the U.S., and even before the COVID-19 there were discussions regarding the understaffing of hospitals in Mexico due to migration and underemployment of specialists. However, it is in the times of crisis such as this pandemic that the scarcity of good quality doctors has become more prominent. Prof Tigau pointed that there is a governmental agreement between Mexico and Cuba to bring in Cuban doctors to help during the crisis. She was concerned with whether this arrival happened as planned. Prof Tigau argued that “this arrival has faced two main critiques: First, directed to the conditions under which these people were hired and the other associated to discrimination against foreign workers in Mexico.”

Cuba has sent its health workers to around 70 countries during this pandemic as a way to increase income.

According to United Nations, the working conditions of these health workers can be categorised as forced labour—a modern form of slavery.

There is a significant proportion of skilled migrants from India in various countries, which makes its significance worth noting. Prof Rupa Chanda, Professor in Economics, IIM Bangalore, spoke eloquently on the subject of skilled Indian migration to developed countries. There are several important destination countries for the skilled migrants, such as the Gulf and the Middle East, as well as the OECD countries. Prof Chanda discussed the example of H1B for which India is the most important contributor of skilled migrants.

Prof Chanda argued that the suspension of H1B programme will have significant impact in terms that the cost will increase, there will be some shift towards local hiring, those who are already sponsored by the employers and are already through the labour certification process and happen to be overseas whether they will be able to go or not is not clear. There will be an effect on family immigration. Prof Chanda made an important observation that “these visas may be restricted to very highly skilled workers and realignment within professions in terms of what sort of skill sets are targeted.” There is undoubtedly “a tilt towards more high skilled, but also across professions.” During this pandemic there is a preference on certain sectors such as health workers. 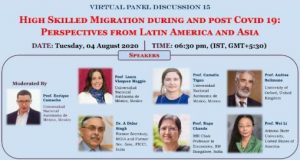 In discussing the policy response of different countries towards high-skilled migrants, Prof Chanda highlighted that “in the US despite the ban on H1B, there is an exemption on medical and other essential workers. Health workers and investor programme applicants are exempted. The unused immigrant visas can be used for professional nurses and physicians. The UK has called on the government to offer British citizenship or permanent residency to all foreign healthcare workers, free extension visa and scrapped healthcare surcharge. Furthermore, Prof Chanda believes that “mobility is already on the agenda, but how you push it in a post-COVID world is to be seen.”

Prof Solimano pointed that “One may make a distinction between economic sectors, high exposure sectors, like tourism, travelling, live entertainment which are the sectors more exposed to the COVID crisis. Those sectors are going to be hit hard. Sectors with upside potential include medical services, internet and communication platform, e-commerce and e-education are very intensive in the demand for high skilled migrants.” While there is an economic depression, there are also opportunities.

Prof Solimano stated “we have a situation where in the destination areas are shrinking, and the origin economies are also contracting. This is the case with Latin America. For Asia, the situation is less dramatic. China is recovering, while Hong Kong and Singapore are not doing bad.”

One pertinent question that needs to be addressed is—are there new opportunities in the post-COVID world? Prof Chanda shared some possible approaches to keep the flow of high-skilled migration, which are economic engagements through broad or sector-specific bilateral agreements. In the long term, one can push forward more of board-based economic cooperation and partnership agreements. We have to look at investment linked mobility schemes. In a US – India trade deal one of the things to really look at is investment-linked mobility schemes because the US is looking for investment partners, while India is looking at shifting and bringing in investment from other countries, especially from China to India. Hence, can we seize this opportunity and try to negotiate something. Apart from agreements we need to tap into the diaspora. Prof Chanda suggested that we need to leverage the pro-trade, pro-investment lobbying that skilled diaspora can do.

The category of high-skilled migrants is complex in so far as there are different criteria in different locations for defining it. Dr Dildar Singh pointed out that some countries follow wage criteria, while others follow skills criteria. An important point made by Prof Binod Khadria, Professor of Economics and Education, Jawaharlal Nehru University, was that “we cannot discuss high-skilled migration as if it was an omnibus category. We have to deconstruct it.” The panellists also laid stress on managing migration. Dr Singh emphasised on the need for inclusion of voice of migrants themselves. Furthermore, these discussions brought to fore the aspect of virtual migration, which might become an important category in a post-COVID world. The confluence of technology and migration implies a change in landscape of migration, which requires further deliberations.

(This is the second part of the GRFDT webinar discussion report.)

Arctic Sea Ice is Melting Faster than Ever: NCPOR Study