COVID-19 Impact: 57 per cent Don’t Want to Board a Train or Flight

An interesting take from the public poll is that most people want to cook and eat food in the comfort of their homes. 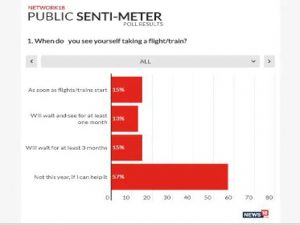 of going out or socialising even with their friends and family. So, the big question is, are people willing to travel amidst the pandemic except for essential travel?

Domestic flights have been operational from 25 May and trains from 1 June onwards after a nationwide lockdown of over two months. An online survey conducted by Network18 revealed that most respondents are not willing to take a flight or a train this year, with the reluctance being the highest in those responding to the Marathi poll—79 per cent. In those who responded to in Malayalam, unwillingness was the lowest —36 per cent.

The online poll was conducted between 21 and 28 May in 13 languages including English, Hindi, Marathi, Bengali, Gujarati, Kannada, Tamil, Malayalam, Telugu, Punjabi, Assamese, Odia and Urdu, through Network18 platforms including CNBC-TV18, News18, Moneycontrol and the Firstpost. Approximately 57 per cent of the people who responded to the poll said they wouldn’t take a flight or train this year for any unnecessary travel. While 15 per cent said, they’d wait for a plane or train for at least three months, up to 13 per cent said they’d wait a month. The remaining 15 cent said they’d take a flight or train as soon as the services began.

The other findings of the survey suggest that this year people are mostly unable to go to movie theatres.

Most Gujaratis, Assamese and Odias together with a large number of Telugu-people don’t ever want to go to a theatre too.

Another interesting take from the poll is that most people want to cook and eat food in the comfort of their homes. Approximately 49 per cent of Gujaratis wish to eat/order in, but not opt for any dine-in. Moreover, many no longer want to shake hands with strangers, and Punjabis with 92 per cent have struck highest in the survey.

In the survey, most of the people have chosen doctors, nurses and health workers as their primary COVID-19 warriors. Sanitary workers bagged the second position followed by police. However, most of the respondents have opted to postpone their travel holiday plans. The ones those who still wonder about travelling are Gujaratis, Tamilians and Malayalis. Despite the widespread hue and cry, drinking is not on the list this year as per the survey.

However, 67 per cent of the respondents don’t want to throw or attend any party this year. Most respondents believe they are kind enough and that the pandemic hasn’t changed that. Even when the lockdown is over, the majority have chosen to contribute more towards housework, where Odias and Kannad people are at the top.

As per the survey, post-lockdown 66 per cent of people want to travel through their private vehicles, while Tamilians, Urdu-speakers and Bengalis have the highest willingness to use public transport.

The writer is a freelance journalist based in Bhubaneswar. She can be reached on twitter
@AgrawalSandhya