COVID 19: Impact on Life and Livelihood in Rural Areas

Every fourth youth in the country is currently unemployed due to reverse migration of men in rural areas, and they are now competing with women for jobs, and in this course, women are losing their work or employment.

COVID-19, being one of the greatest human tragedies of the contemporary era, has become a wake up call. It has provided several lessons in the conduct of all aspects of human personality, 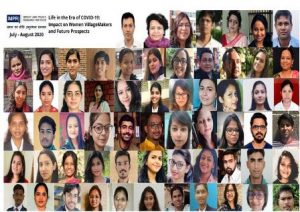 professional, societal, and institutional lives in all countries across the world. The rise of populism, authoritarian nationalism and the global crisis due to the COVID-19 pandemic have huge impact on women’s lives, work, livelihoods, and entitlements. In particular, the current pandemic has accentuated already high and persistent gender inequality and disparities in rural areas in developing countries like India. The Impact and Policy Research Institute (IMPRI), New Delhi, conducted a survey among 4500 women respondents in rural areas of 20 Indian states during the month of July and August 2020. The survey report was released on 5 September 2020 in a national webinar attended by several well-known experts and faculty, practitioners and policy makers. Some key findings of the survey based on the impact of pandemic on rural women or village makers have been discussed here.

The survey finding reveals improvement in safe drinking water, toilet facility and use of cleaned fuel, but the expensive charges of LPG is still a major hurdle. One in every women respondents used tap water for their drinking purposes;80 per cent of them had toilet facilities within the house, 75 per cent of them had LPG connections, but due to high charges three-fourth could not refill them.

Access to education and health facilities are still a main problem in rural areas, as eight out of 10 respondents reported that girls’ college situated at distant place viz.  more than 5 km. Around 53 per cent of the surveyed married women revealed that their children could not attend school during pandemic due to distance and another one-third did not attend the online classes in absence of availability of smart phone with internet connection. The problems of public healthcare system were also revealed by half of the respondents as they still availed the private health facility, and 80 per cent of them use their own savings for their healthcare. The worst part is that still 52 per cent of the married women did not use sanitary pads during menstruation as they said they are expensive or unaware of it.

Livelihood and Time Use

Around three-fourth (74 per cent) of the respondents still depends on farm activities for their livelihood, while 36 per cent were involved in non-farm activities. Over half (56 per cent) of the respondents did not get any work during the pandemic as the work they used to do in both farm and non-farm activities before pandemic has now gone to returned male migrants. This was also reflected in time use survey, and now women were spending more time in unpaid domestic and care work. Out of total active time of about 10 hours in a normal day they were spending 90 per cent of their time in unpaid work such as cooking, other domestic and care work.

This reveals that women’s work load in unpaid domestic and care activities in rural areas have increased during the pandemic, which is mainly due to their children not attending schools and lack of economic activities for women due to high returnee male migrants in rural areas.

As three-fourth (76 per cent) of the respondents reported that the migrant workers returned to their villages.

For ages rural society has been bogged down by many social evils. Over the years, there has been improvement, but still 14 per cent of respondents revealed about existence of untouchability in rural society, 21 per cent experienced discrimination based on caste and 46 per cent encountered wage discrimination based on gender. Around 43 per cent respondents reported violence against women in their neighbourhood due to poor cooking, children crying, and not taking care of in-laws. In addition, 10 per cent of the respondents shared that there has been an increase in child marriages,15 per cent reported increase in child labour, 38 per cent said increase in verbal abuse, 13 per cent reported increase in farmer’s suicide during the pandemic.

About 57 per cent of the respondents belonged to BPL households and all possessed Aadhaar card and Voter ID card. The government welfare package reached to majority of the respondents as three-fourth (76 per cent) of them received some form of relief packages, about 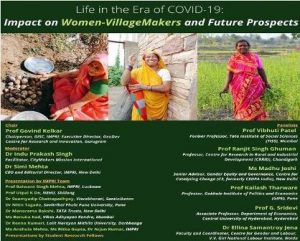 40 per cent received cash transfers and (83 per cent) received work in MGNREGS, out of those who applied for work.

In general, in rural areas also people are taking preventive measures during the pandemic and 52 per cent of the respondents were using cloth masks. But the impact of pandemic over the respondents has been profound as half of them were stressed about earning a livelihood and getting coronavirus themselves or their family members. Around 55 per cent of them were eagerly looking for work and another 52 per cent were in need of urgent medical assistance and ration.

In response to the survey data, Prof Vibhuti Patel, Former Professor, Tata Institute of Social Sciences (TISS), Mumbai, shared that every fourth youth in the country is currently unemployed due to reverse migration of men in rural areas, and they are now competing with women for jobs and in this course, women are losing their work or employment. She also stressed that gender stereotypes are playing a big part and there is an under reporting of unpaid care work.

Madhu Joshi, Senior Advisor, Gender Equity and Governance, Centre for Catalyzing Change (C3, formerly CEDPA India), New Delhi, shared that women being isolated in a lockdown situation not only make them vulnerable to domestic violence, but also are cut off from social groups, which give them identity and power.

Prof Govind Kelkar, Chairperson, GISC, IMPRI and Executive Director, GenDev Centre for Research and Innovation, Gurugram, pointed out that today we need data for ownership of resources by women. Usually, land ownership is in the name of the head of the household, which creates a lot of patriarchy and masculinity in society. She also mentioned that unpaid care work is a necessity, but it should not be the responsibility of only women. Unpaid care should also be recognised as productive work. Economists have made only paid work productive, and unpaid work is not given any value. A woman spends around 12-14 hours on non-paid work, but she is not considered a worker. Unpaid work has to be reduced with technology. She also said when we talk about women’s inequality it is not considered a science, but considered as activism. So there is a need to conceptualise patriarchy, masculinity norms in the present context and welfare for women in future.

Preventing Child Marriages: PCMA and the Road to be Taken