The researchers say that the optimal strategy would be to release approximately half the population 2–4 weeks from the end of an initial infection peak, and then wait another 3–4 months to allow for a potential second peak to pass before releasing everyone else.

As the first wave of the COVID-19 pandemic wanes in Europe, many countries are relaxing their 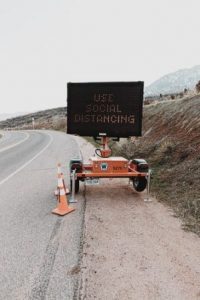 Scientists from the University of Oxford and the UK Centre for Ecology and Hydrology in Wallingford show that a gradual strategy with two discrete releases of subgroups of the quarantined population would be optimal for society as a whole to minimise deaths while protecting the economy.

“We find that ending quarantine for the entire population simultaneously is a high-risk strategy, and that a gradual re-integration approach would be more reliable,” write the authors.

The researchers model the numbers of susceptible, exposed, infectious, and recovered (or deceased) persons in the UK, separately for those under lockdown and those working as normal. They derive the best strategy for releasing people from lockdown, requiring that the greatest number should be allowed to work as soon as possible (while maintaining social distancing), but without overwhelming the health services – estimated to happen when there are approximately 4 million infected people in the UK. The model was kept as simple as feasible, not only to make results easier to interpret, but also to allow it to be easily applied to other countries.

“Exactly what happens as lockdown eases can be hard to predict, as different people will respond in different ways. However, when a large enough group of people is considered, mathematical models like ours are able to represent the expected average behaviours across a large population. Most importantly, we are able to assume a wide range of “What if?” scenarios, such that we can explore a range of possible infection increases. Ongoing testing is then important to check that any disease increase does not surpass the predicted bounds,” says Professor Michael Bonsall from the Mathematical Ecology Research Group at the University of Oxford, the study’s lead author.

The researchers conclude that the optimal strategy would be to release approximately half the population 2–4 weeks from the end of an initial infection peak, and then wait another 3–4 months to allow for a potential second peak to pass before releasing everyone else.

The optimal solution depends partly on the (poorly known) rate at which people sick with COVID-19 recover and the rate of viral transmission, but hardly on the death rate, the incubation period, or the effectiveness of lockdown measures. While the model itself does not prescribe which people should be released from lockdown first, the authors suggest that this should be the younger part of the population – known to be less susceptible to COVID-19—provided that these are closely monitored with molecular tests, as they would be at increased risk.

Also Read : Right to Food and One Nation, One Ration Card

“The take-home message for decision-makers is to act very cautiously, and to monitor any lockdown release very closely. Our model shows that second waves can occur very quickly if transmission rates end up higher than expected, or if more people relax their lockdown measures than expected. The delayed incubation period between infection and presenting symptoms means that we are constantly seeing the effect of the disease a few days late. Only by ramping up testing measures can we accurately get a sense of how the spread and control of disease is happening. This will allow us to respond quickly if an unmanageable second wave begins to appear,” concludes Dr Thomas Rawson from the University of Oxford, the first author. (Source: frontiersin.org)