COVID-19 on the Crime and Domestic Violence Graph of India: What Lies Ahead?

COVID has tested the social and economic base of our society. It is important for us to fill the voids in our system and prepare ourselves for the upcoming challenges.

COVID-19 has exposed the structural realities of the system of law and order in the country.  The rise 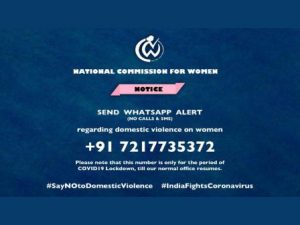 in criminal activities and domestic violence help gauge the long-term effects of the viral pandemic on people at large. Understanding the underlying factors and the pattern of these threats would enable us to equip ourselves with appropriately planned responses. Further, the study of the micro and meso-level occurrences of such threats would minimise uncertainties and maximise our chances of producing an effective response to the contemporary and future challenges.

The ongoing crisis in the backdrop of COVID-19 has led to an overall reduction in the rate of crime and has mildly augmented as well as halted the proliferation of many illicit businesses. Cases of theft have witnessed a drop because of the strict imposition of nationwide lockdown. The vehicular population on the streets has immensely decreased and positively affected the situation of road accidents with almost negligible cases in the past two months. Cases of molestation of women and robberies have almost halved from the last year. Incidents of rape has dropped by 70 per cent, and the country has also witnessed a fall of 40 per cent in murder cases.

Also Read : Gender Based Violence At Work In South Asia

Certainly this downtick is natural, but one can also attribute this decline to the fall in the practice of reporting and arresting. Hate crimes and new streaks of xenophobia are mushrooming in many parts of the country which are no longer limited to racist slurs, abuses and online threats, but have also disclosed the ugliness of the real face of cultural and ethnic loathe with the rise in the racially motivated spit attacks. A North Indian woman was recently abused on a street of Vijay Vihar in New Delhi, where a 40 year old man spat on her and later humiliated her by calling her ‘coronavirus’. The cases of the victims of communal virus should not be made to wait for their vaccine of justice; they should shortly hear such pleas through an online medium to eradicate the benefit of doubt of any possible escape from the mind of the perpetrator.

The blanket border sealing has created opportunities for criminals to smuggle people through closed borders. In Kerala, organised smuggling of the individuals has been reported to take place for a price of Rs 1000 per person.

Eighty per cent of the Indian population is engaged in the informal sector; one-third of these belong to the category of casual labourers who need urgent support services of the state to access basic resources. The absence of effective redressal mechanism would consequently lead to the adoption of illicit and wrong modes of aid. The vulnerable and other prospective criminals might fall back on criminal activities to meet their demands and to support their families. This inevitable outcome can usher the nation to a new era of crime. Hence, the government should take immediate steps to help these stranded migrant workers. The government can curb the escalation of myriad sinister pursuits by making provisions to respond to the most indispensable needs.

Globally women are found to be engaged in three-quarters of all kinds of unpaid care work, which includes household disease prevention practices and taking care of the sick members of the household. “Stay Home, Stay Safe.” But what can one do when one’s home is the most threatening risk zone out of all places? Despite their significant contribution to the household, women continue to face extreme forms of atrocities in their own homes. The inescapable confinement of quarantine has proved to be a dreadful nightmare for women who are subjected to cruelty by their husbands and their relatives. The ensuing crisis has compelled the victims to live with the abusers and with little hope of any external life-saving support.

The National Commission of Women (NCW) has reported a 100 per cent increase in the cases of domestic violence in India. Women are forced to experience the wrath of their husbands who have lost their jobs or are unable to satisfy their need for alcohol during lockdown. In order to holistically solve this problem, the UN Women has recommended that social media posts mocking and deriding men, who are said to be ‘suffering’ as they are compelled to help their wives in housework, should be reported and acted upon.

The High Court of Jammu and Kashmir has rightly said that all crises disproportionately affect women. However, each state in the country is facing different levels of crises. For instance, in Kashmir Valley there are at present no shelter homes as required under PWDV Act. A request for creation of designated temporary shelter should be made on an urgent basis, where women can stay until a provision for an alternate arrangement is made.

According to the United Nations Population Fund (UNFPA) COVID-19 can give rise to 15 million unintended pregnancies along with 31 million cases of domestic violence. Disruptions in the supply chain of contraceptive devices have limited their availability in the market. This has limited the access of modern contraceptives to 47 million women living in low and middle income countries who will longer have a say in the decision of family planning in the coming future. The high probability of such instances of sexual exploitation and intimate violence can deepen the gender inequalities. Therefore, the paramount concern is whether we can adopt punitive measures against the perpetrators of domestic violence during the high risk period of lockdown? According to the study conducted by Radha Iyengar at Harvard University, police intervention or punitive action in cases of domestic violence escalated the number of cases of intimate violence against the vulnerable partner. Penal intervention during lockdown is most likely to produce counterproductive results, and further become a source of more violence. Consider a situation where law enforcement agencies use some form of aggressive action on the abuser in response to the victim’s complaint, the abuser in turn may yet again turn violent on the complainant after they leave. It should be kept in mind that both the victim and the abuser live under the same roof.

The ongoing crises will drastically change the social structure of the society. The emerging trends can be analysed by understanding the post Corona situation in Wuhan, where divorce rates have shown a steep rise after the city reopened.

Yona Nestel from Plan International has emphasised on the fact that most of the education systems around the world are predominantly ‘gender blind’. The future demands development of new methods and material of teaching to answer to the growing levels of gender disparities, which have been magnified by COVID. There is a need to do away with the age old stigmas and stereotypes against women. The coming generations should live in a world where notions like “it is her job to cook and clean” have been obliterated.

The issue can be addressed by increasing the availability of the telephone facility for registering complaints, and counseling of women and girls over the telephone or through online platforms can help them to deal with the problem in a more psychologically stable manner. In any plan of action immediate allocation of the victims to a safe place or a rescue centre should be the foremost stipulation. Many countries have developed inquisitive methods to deal with this predicament successfully. In England and Wales, a new programme has been launched to train supermarket workers to detect domestic abuse. Since grocery shops are one of the only means of escape for the victims, thus the staff is the most reliable and accessible group for the authorities as well as the victim. In this way the neighbourhood can also contribute to the fight against domestic violence. We can set incentives for individuals who report such cases to the law-enforcing agencies and encourage the community to come forward to help. COVID has tested the social and economic base of our society. It is important for us to fill the voids in our system and prepare ourselves for the upcoming challenges.

The writer, a legal policy researcher, is an undergraduate Law student at the West Bengal National University of Juridical Sciences. She can be reached on twitter
@KashmitaMewal

CSIR lab to reach out north-east villages through entrepreneurship drive