The pandemic COVID-19 pose unprecedented challenges to the countries globally and it’s high time for the global leaders to bring a paradigm shift in more investment in the health sector instead of defence and warfare investment.

Consider a hypothetical scenario—a world leader issues a warning about a global health crisis and the repercussions of being under-prepared for such an epidemic. Say, this warning was telecasted across the world a few months ago, in January 2020. Would you implore the government to pay heed to this warning? Now, under a prolonged-lockdown, forced to forego work, social interaction, business, entertainment and life—as we know it, I would assume that we would have preferred that the warning was taken seriously. Quite surprisingly, then, such a warning first appeared in 2015, in a TEDx talk by Bill Gates, where he forecasted that ‘if anything could kill over millions of people in the coming years, it’s most likely going to be a highly infectious virus and not a war—microbes, not missiles’. Yet, little action was taken to improve the global healthcare system or strengthen local community-based healthcare mechanisms by governments. There are still millions living without proper hygiene and sanitation facilities, without adequate access to healthcare, in poor shanties and slums across the developing world, who are at a high-risk and might soon become heavy casualty due to the absence of political will and timely action.

It, therefore, needs to draw attention to the trade-offs involved in the global healthcare budget in comparison to the global military expenditure (as the latter is one of the most-significant policy issues for any government and draws heavy investment). So, broadly speaking, over time, a 1 per cent increase in military spending results in a 0.62 per cent reduction in health spending. Specifically, for lower and middle-income countries, the trade-off is almost proportional, as the same increase in military budget results in a 0.962 per cent decrease in health expenditure. In 2013, the global expenditure on healthcare—5.9 per cent of global GDP—was almost two and a half times more than the expenditure on defence—2.3 per cent of GDP. However, this data masks significant regional variations that deserve attention. For instance, the total expenditure on health varied from 1.4 per cent in Central and South Asia (primarily low and middle-income countries) to 8.4 per cent in North America (mostlywell-developed nations). Further, the poorest regions of the world, like South Asia, Eastern Europe and North Africa spent more on defence than on healthcare in 2013.

Even today, most countries, barring Switzerland, Luxembourg and other similarly highly-developed nations, spend more on the military than healthcare. India is no exception—our defence budget is 2.4 per centof the GDP (2019), whereas our investment towards healthcare is barely 1.28 per cent of the GDP. Now, if we compare the number of deaths due to terrorism between 2010–2020 with the magnitude of lives lost due to health-concerns or epidemics, a clear picture emerges. Take the USA for example, where 52,217 lives have been lost to COVID-19 in the past three months alone, whereas the number of lives have been lost to terror is around 180. One might argue that this is so because the USA is prepared defensively and agreed we need a well-equipped defence force to safeguard our populations. But, don’t individual lives deserve equal priority and shouldn’t our politicians be encouraged to fund health-care activities with as much gusto as they engage in promoting investment and media attention towards war and foreign-threats? Tackling a pandemic is certainly not as fiery an issue, but it is—if not more—an equally debilitating threat for the people.

As we are witnessing, COVID-19 is not only a public health emergency but a global-financial catastrophe.

The United Nations has predicted that the global economy could shrink by 3 per cent and will likely cost at least $1 trillion this year (2020).

General Guy Ryder (Director, ILO) stated that before the pandemic, an alarming 190 million people were unemployed globally and now with work-from-homes and complete shutdowns, 6.7 percent of working hours (in the second quarter of the year) could be affected, which will be equivalent to the labour of about 195 million workers worldwide. With such signs, COVID-19 will prove to be worse than the global recession of 2008. Only this time, the cost might be heavier for low income and developing nations. 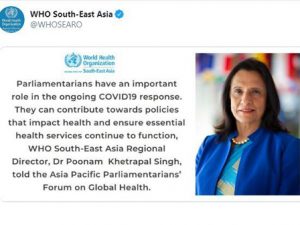 At times like these, the WHO plays a crucial role. It activates the Global Health Cluster, initiates the Global Outbreak Alert and Response Network (GOARN), deploys emergency medical and response teams, epidemiologists and their standby partners. The WHO works with organizations and foundations, globally, to ensure effective coordination and response. The organization also releases funds from the CFE (Contingency Fund for Emergencies) to support response activities in the most vulnerable countries with weak and fragile health systems. To tackle the present crisis, the WHO has released about $9 million from the CFE. The World Bank and the International Monetary Fund will contribute $12 billion and $50 billion to help strengthen weak and vulnerable health systems in developing nations and tackle the economic and fiscal impact of COVID-19. Big as these sums are, gaps still remain. This funding will help policymakers take responsive steps to boost economies, but they do not cover protective measures that are required to combat the effects of the pandemic. Therefore, the Global Preparedness Monitoring Board (GPMB) has estimated and called for an immediate additional investment of $8 billion for the response efforts. This would help in funding rapid development of vaccines and diagnostics and, at a large scale, so that they are easily available. It would also help WHO to organize and coordinate efforts to support vulnerable countries, ensuring sufficient procurement of protective equipment for the healthcare workers.
At the moment, the question is, are we doing enough to fight this pandemic? The main priority should be wider and quick testing along with the development of new and cheap diagnostic kits. Research led by the UnitedHealth Group (Research & Development) and OptumCare clinicians has proved that a simple, self-collected test is as successful in detecting COVID-19 cases as the existing clinician-collected test. The widespread implementation of this less-invasive procedure would minimize risk to health care workers and also enhance the efficiency of the testing.

The other priority should be safety and protection of the healthcare workers who are at the highest risk of contracting the disease. As of 15th April, nearly 9,300 healthcare workers in the US have become infected with COVID-19 and 27 lost their lives. Adequate funds are required to procure more protective gears and equipment for healthcare workers and the people involved in the response efforts. Meanwhile, Bill and Melinda Gates Foundation has donated $125 million to fight the outbreak. Coalition for Epidemic Preparedness Innovations (CEPI) has donated about $30 million in eight COVID-19 vaccine projects to date. Other major groups involved are PepsiCo and the Tata Group which have pledged $45 million and $200 million, respectively, to support and strengthen those who have been most affected.

In India, PM CARES (Prime Minister’s Citizen Assistance & Relief in Emergency Situations) fund received INR 6,500 crore donation in just 3 weeks. Meanwhile, Infosys pledged INR 100 crore to alleviate the impacts of COVID-19 across India. In addition to these, the Azim Premji Foundation, Wipro and Wipro Enterprises have collectively pledged INR 1,125 crore aid to address the ongoing health and humanitarian crisis. Google has made a $800 million contribution to aid small and medium-sized industries, governments, health organizations and workers involved in the fight against COVID-19.

As evident, many corporations and not-for-profit foundations have stepped up to fill the global monetary gap and support recovery efforts. However, there is an important lesson to be learnt.

Efficient public health systems must be the sole responsibility of our governments. The promise of a welfare state is not to be met by the contributions of corporations and industry. As an ordinary citizen of India, I believe that wider financial support in such times (by citizens making individual donations or philanthropic contributions by corporations) is certainly welcome, but cannot—and should not—become the life-jacket of a highly populated, unequal and impoverished nation. I hope our policymakers, fellow-citizens and corporate investors are paying attention and will, in time, demand better preparation for the uncertainties of the future. Pro-activeness in this regard, towards making a more resilient economic and health structure, will be a more beneficial strategy and will save us, in the future, from fear-driven reactive approaches to problems like COVID-19.