COVID-19 to Change the Trajectory of Talent Migration

The ongoing COVID-19 pandemic has changed the perspective of brain drain in many different ways. Will there be “talent hunt” or “talent war” among the countries in near future after the pandemic? 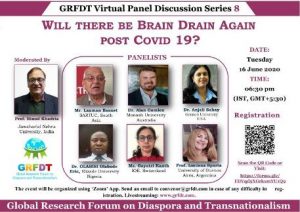 developed countries in search of new opportunities, better standard of living and quality of life. The process of brain drain began in 1960s from South Asia to United Kingdom to fulfil the health workers’ vacuum. There are many pros and cons concerning brain drain from the perspective of developing countries. However, the ongoing COVID-19 pandemic has changed the perspective of brain drain in many different ways. What would be new realities of brain drain in the aftermath of the pandemic? Will brain drain continue as before? Will the nature of brain drain change or will there be increase of demand on particular or selective profession? The panellists from seven continents gave their expert opinions regarding these issues and answered the related questions of the participants at the webinar organised by the Global Research Forum on Diaspora and Transnationalism (GRFDT) on 16 June 2020. The session was moderated by the Prof. Binod Khandria of Jawaharlal Nehru University, India.

After 1960s the United States of America attracted skilled and educated people from all over the world. However, development of information technology (IT) changed the scenario of brain drain. When IT professional returned to their home countries with their knowledge and expertise, the process of “brain drain” was soon transformed into “brain gain” from “brain circulation.” Prof. Binod Khadria mentioned this trend as the beginning of brain gain which overtook brain drain. However, brain drain is likely to return after COVID-19 particularly in health sector, as assessed by Prof. Binod Khadria. He posed a question: Will there be “talent hunt” or “talent war” among the countries in near future after the pandemic?

Also Read : Migrant Workers from the Gulf: An Exodus that Can’t be Downplayed

In search of answers to some of these questions, the panellists put forth their diverse views. It was asserted that unemployment had increased world-wide since the outbreak of the pandemic. Many people lost their jobs, both locally and internationally. Internal migration was at all time high as people migrated from urban centres to their native rural villages after having lost their jobs and sources of earnings. Internationally many migrant workers were forced to go back to their home country due to economic hardship in their host countries. The general secretary of South Asian Regional Trade Union Council (SARTUC) Laxman Basnet explained that migration trend would not change rapidly in developed countries because of secure policy of employers either from government or private sectors. Developed countries are assuring employment security which will protect the migrant worker to stay in the host country. He brought the example of Japan, South Korea, and Singapore. Basnet also highlighted the situation of Nepalese students whether they tend to return from USA to Nepal and pointed out that only 600 students returned to Nepal out of 400,000. 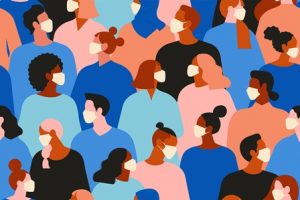 three main areas – the demand for labour migration and supply of immigrants, migrant decision-making and migration control. He believed that the demand of migrant workers would decrease because of rising unemployment due to pandemic situation. Giving the example of IMF and EU worse economic downturn since great depression, he concluded that the demand countries would hire extensive local workers over migrant workers. However, the labour market will differ by skill, high and low skill work, especially in health care, infrastructure and food production which are likely to witness less job losses in contrast to medium skill jobs such as tourism, manufacturing, retail which are often classified as nonessential. On the other hand, supply of immigrants will depend on the individual and household in two specific ways. One group of people will be less likely to migrate, as it would be a risky decision and may concern paying off long term and health risk. Other group of people might be more likely to migrate particularly those who desperately need to move for livelihood because of the pandemic.

Dr. Anjali Sahay highlighted her opinion on the perspective of United States’ situation. She mentioned the reality of post-COVID-19 situation under which individual decisions will be least important because their movement will be dictated by political leaders, companies and even coronavirus. High skilled individuals will get offer for stable visa process. Skilled workers will also be attracted by the universal health care and insurance.

Prof. Luciana Sparta from Argentina also agreed that migration would continue after COVID-19 due to economic recession and decelerating currency value in Argentina. However, most of the panellist agreed that Healthcare workers are the first instruments of economic global migration, which has been vastly damaged by the COVID-19. Prof. Chandra Shekhar mentioned that after COVID-19, initially there will be a short lapse in brain drain, but it will soon resume because without foreign workers it will be difficult to gain economic recovery in the Gulf countries. This short gap may stay from 5/6 months to 2 years until a vaccine has come into effect, to provide immunity against the coronavirus.

There will be actually major shortage of high skilled workers worldwide. As the reality of COVID-19 situation we will see more of our dependence on technology and uses of Artificial Intelligence (AI). Therefore, the demand of expertise on innovation, skill, and AI expert would increase. However, the question is do we have those skills available in our country or we would depend on other countries? The current situation has already shown that countries are very selective to hire foreign workers especially in healthcare sector. Thus, all depends on country’s own economy and need. Therefore, the government also become very selective and the future agreements between countries will depend on what skill will be needed in the recipient country and what available skill the sending countries have. Gayatri Kanth (IOE, Switzerland) drew attention in this regard. Prof. Binod also pointed out that there will be increase in health workers demand among the countries in post COVID-19 and also drew attention towards the US President Donald Trump’s recent temporary suspension of green card applicants with the exception of those seeking entry to work as doctors, nurses or other healthcare professionals. Another example came from Prof, Paddy Siyanga Knudsen, where she mentioned about South–South movement as an example of medical students who travel from Zambia to India for study.

Impact of COVID-19 on Labour Migration

Gayatri Kanth pointed out the impact on labour migration of COVID-19 and given the fact by the report of ILO (29th April, 2020) estimated that: “the cost of 305 million full time job and 436 millions of enterprises faced high risk of serious disruption world-wide causing companies’ trillions of dollars and lost economic opportunities. This constant changing figure indicates that demographic changes of labour market (regular and irregular work force) facing serious economic problem of recent times.”

Dr. Anjali Sahay concluded that North – North corridor will be very busy especially for dreamers who will be looking for better opportunities.

However, in the case of USA, the shortage of skill worker in some selective sector such as IT, need to focus and hire the best quality of workers form home and abroad and lobby groups can negotiate with the government in this case.

Talent and skill people are naturally attracted to places where environment provides economic benefits such as opportunities and possibilities. Specifically, in this new pandemic situation, skills are vital component for development and achievement of SDGs. Gayatri Kanth gave the feedback on policy response of supply and demand side of migration after COVID-19. Labour market need to adopt well-managed and balanced migration polices among sending and receiving courtiers and regions, private sectors, trading, companies, industries. It is expected that post-COVID-19 will increase the skill gap in demand side and the future of migration policy will depend on host countries’ needs and policies. It is important to have knowledge to address the gap in best way such as the knowledge of availability of skill and how to address them.

According to Gayatri Kanth, it needs to have a medium and long term planning by following the current data and migration path. She also mentioned that it needs to solve the problem by creating consents and agreements between both sides. Dr. Alan Gamlen believed that rather than game changing dimension it would slowdown the migration which he called “sending the gear”. Others believed that policies and demand of health workers will increase. Brain drain will also look for better health structure of receiving country. As reported by Dr. Anjali Sahay, the decision of migration policy is going to come out from executive decision of government and she drew the example of Trump’s election manifesto regarding migration policy.

Nevertheless, how the supply side will address to this selective demand of receiving countries? In response of this question Gayatri Kanth gave the example of Japanese government’s demand for care giver from India. There was an agreement between India and Japanese government where India has given training to 112 nurses about the culture, language and personal care of Japan. When those nurses will come back it will be a brain gain for India. Other countries that are considered as supply side can follow the example.

The panellists also came out the suggestion that COVID-19 has affected the migrant workers and remittance flow to Bangladesh also. The recent report of a national newspaper drew the scenario of the situation of Bangladeshi migrant workers who are mostly working in the tourism, hospitality and construction sectors. Many migrant workers to the Gulf have been laid off and face limited prospects of employment. International remittances normally represent around seven per cent of Bangladesh’s GDP. But the COVID-19 pandemic is having an acute effect on Bangladeshi migrant workers abroad, who are largely concentrated in countries with strict lockdown measures. In response to this situation, the former foreign secretary Shahidul Haque stated that a holistic, nuanced approach that acknowledges migrant workers’ economic contributions is optimal. Concerning the current situation world-wide, it would be too early to draw broad conclusion in the case of migration because it would be different in different sectors.

The writer is research alumni, Department of Social Welfare, EwhaWomans University, Seoul, South Korea. She can be reached  @raziasu17261635