Criticisms of the document on the grounds that it could dent domestic law mechanisms are plain rhetoric with no solid evidence to strengthen such arguments. 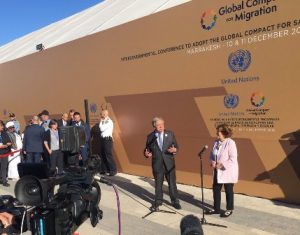 The historic international deal on movements of people – Global Compact for Safe, Orderly and Regular Migration was signed by 164 countries in order to facilitate the cross-border migration around the world. The compact signed at a conference held in Marrakech was celebrated by the United Nations which took to Twitter to hail it as a significant victory for 258 million migrants worldwide – ‘History was made on #HumanRightsDay in Marrakech with the adoption of the Global Compact #ForMigration’.

UN Secretary Antonio Gueterres described the non-legally binding deal as a “road map to prevent suffering and chaos,” dispelling the fears that it would not respect the sovereignty of all members. The document reads that it is grounded in principles of international cooperation, national sovereignty, sustainable development and human rights among other cross-cutting values.

“On one hand, while Angela Merkel came in defence of the compact and hailed it as a “milestone”, on the other hand recall that President Trump had declined to endorse it a year ago.”

Other countries which have rejected it as well are Austria, Italy, Hungary, Poland, Latvia, Slovakia, Bulgaria, the Czech Republic, Chile, Australia and the Dominican Republic. Also likely is the pull out by Brazilian President-elect Jair Bolsonaro who could follow the lead of the US and European nations in withdrawing from the compact entirely. This implies the divide between liberal globalists and nationalists has only widened with the landmark accord roiling politics in many European countries. For instance, it has become rather difficult for German Chancellor Merkel to gain support for her stance on migration when far-right populist Alternative for Germany (AfD) party has waged a campaign to stall it.

It has also created more havoc in the political establishment of Belgium where the New Flemish Alliance withdrew from the ruling coalition over Belgium’s decision to back the compact. Evidently, it has left the now-minority government in a near slump.

The reason why it is not welcomed positively by many states and world leaders is that it could infringe on the national sovereignty of countries despite its legal character which is non-binding in nature and doesn’t impose conditions on any state.

Critics have been vocal in expressing reservations to it as they argue the compact does not separate refugees from economic migrants. Such concerns could not assuage far-right groups even though it tells the objective of the intergovernmental agreement on migration is to defend the human rights of people who continue to live outside the country of their birth.

Momentous closing of the Intergovernmental Conference to Adopt the Global Compact #ForMigration. For the 1st time in the history of the @UN, we have been able to tackle an issue that was long seen as out-of-bounds for a truly concerted global effort.

Therefore, following the New York Declaration for Refugees and Migrants, the Global Compact was set out for approval with 23 objectives that include reducing the risks faced by migrants by protecting their rights and providing them with care and assistance and facilitating mechanisms for legal migration.

“But even though the standards listed are non-binding and come under “soft law”, there exists definite pressure to abide by the set of rules. This concludes that there is indeed a moral pressure to adhere to the standards of the UN Compact.”

If this could further lead to “juridification” or it could evolve from politically binding to legally binding, the possibility is remote as the process to reach such a stage may take decades of practice. So if enough number of countries decide against the adherence to the Compact, then no customary international law will come into force.

Criticisms of the document on the grounds that it could dent domestic law mechanisms are plain rhetoric with no solid evidence to strengthen such arguments. Since Migration is a global phenomenon; it can only be dealt with international laws and jurisdictions. Considering states are unwilling to extend their support to such laws, in challenging times the need for such Compacts only get more validated.

Partners’ Forum: Coming together for Maternal, Newborn and Child Health