‘Mera Baap Chor Nahin hai (My father is not a thief)’ is continuing to echo in the 73 year-old-Indian democracy.

Denotified, Semi-Nomadic and Nomadic Tribal communities are those groups in India that were listed as ‘criminal tribes’, under the Criminal Tribes Act of 1871, enacted by the then British Parliament. Although they were denotified, that is, unlisted between 1952 and 1959, they are probably the best examples of communities being victims of continuing intersecting inequalities. They are on the wrong side of numeroucontinuum—upper class versus lower class; educated versus uneducated; so-called higher versus lower caste; those living in the plains versus tribals; those living a settled life versus nomadic; and in terms of politically represented and not. The women in this community bear the biggest brunt as victims based on their identity and further because of their gender, considering the given patriarchal norms that are followed.

What characterizes this community is that it has an enormous capacity to negotiate and exist in the current socio-economic-political system on the wrong side of the law or on the ‘exception’ side of policies, branded as communities that produce alcohol, engage in sex work; as those engaging in a nomadic life which might require them to ‘illegally’ occupy a land or even engage in petty thefts; live in the street engaging into begging or ‘using’ children for making a living. Life of nomads and peripherally settled denotified communities is one that does not get access to the current education and health delivery systems, which rarely provide mobile delivery of these services. They are peripherals in terms of art and culture despite having age-old traditional supremacy in these domains. They are, at the most, inopportunely referred to as artisans but never called artists.

Denying them access to education and ghettoizing them to peripherals, the communities were denied spaces to reform their own systems and tradition owing to the regime that began in 1871.

Beneath these inequalities that intersect in their lives lies a wall of a mainstreamed morality, which causes stigmatization in their lives. The stigma not only creates a bedrock for all inequalities to exist and get perpetuated but also gets internalized by the community itself as something that they are destined to be or as a norm that cannot be changed. The communitiesnow accept this as a fact. What is worse is that, even when there is a regimen of citizenship rights and entitlements, mainstreamed morality offers challenges to prevent the community from collectivizing even for realizing the sanctioned rights—as an identity based on any characteristics of this community is denied existence even in the collective conscience. The community that brews alcohol—when facing a water shortage is not allowed to make collective demands for regular water supply—because of their identity as sellers of illicit liquor. 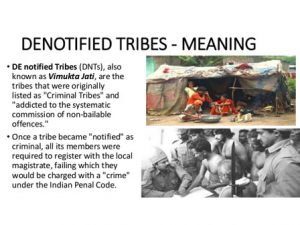 A collective effort to advocate for changes in policies, laws and schemes is challenging and even when it succeeds, remains only on paper.The society through mainstreamed moralities might sympathize but never accept; might even make policies and laws favourable to these communities, but practices and narratives refuse to formalize the acceptance. Hence, things seem like they change but never actually change. A Criminal Tribes Act gets repealed, but the entire system continues in the name of the Habitual Offenders Act. In this context, a report by the Denotified and Nomadic Tribes (DNT) community members, Mera Baap Chor Nahin hai (My father is not a thief) organized by the National Alliance group of semi-nomadic, nomadic and denotified tribes presents the Panellists’ own experience of poverty and discrimination.

The community has never experienced real equity, freedom and empowerment. The Constitution allowed the ‘criminal tribes act’ to continue to exist. The real freedom for this community was not even in 1959, when the Criminal Tribes Act was finally abolished and this community began to be called as denotified communities. In fact, with the introduction of the Habitual Offenders Act, while they are not referred to as ‘criminals’ anymore, they were given a so-called respectable name of ‘history sheeters’ in Police manuals. They are not yet free. Every so-called progressive law—from the Wildlife Protection Act to beggary laws–further impoverished them and deprived them of their livelihood.

Their life and distress have not been documented, let alone be heard and analysed. There is no data on them. They exist, but not in policies and programmes. Because they do not constitute a vote bank in politics.

It begs the larger question of the basis on which The Criminal Tribes Act, 1871 was enacted? What was the rationale? Why were these tribes never considered part of Depressed Classes or Primitive Tribes, so as to help them into affirmative action in the 1920s and later? The Census, 1931, states, ‘Criminal tribes have not been included (into depressed category) unless their condition be such that even if they ceased to be criminal by habit or profession and lived as peaceable and law-abiding citizens, they would still be depressed on account of their social position as distinct from their occupational stigma’. Why are they denied a depressed status? Why, post Independence, did the Prevention of Cruelty to Animals Act, 1960 and the Wildlife Protection Act, 1972, ignore the existence of this population, which historically depended on the resources governed by this Act for their livelihood? Why this population is not even counted as a category in the Census to inform policies for them? Why is the 2011 Census despite having collected caste and tribe level information not providing information on their count? Can the 2021 Census have a separate category of DNTs in their data collection template to ensure their enumeration? There are several unanswered and probably unasked questions.

On the 150th year of the 1871 Act, from 12 October 2020 to 12 October 2021, we, as citizens, need to introspect and seek apologies and remediation from the British Government as well as the Government of India.

Cannot Prevent Earthquakes, But We Can Minimize the Damage: MoES