Figures submitted in the Lok Sabha today during the Question Hour signaled that sedition cases in the country have doubled since 2014. According to National Crime Records Bureau data, while the number of sedition cases registered in 2014 was 47, it rose to 93 in 2019. 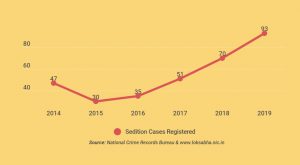 The figures were submitted by MoS for Home Affairs, G Kishan Reddy, in response to the question by INC’s Anumula Revanth Reddy. They also revealed the conviction rates for cases charged under sedition, which dipped from 25 per cent  in 2014 to 3.3 per cent in 2019. 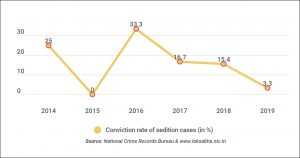 However, Mr. Revanth Reddy said that the documents submitted by the MoS were unsatisfactory, as he had inquired about sedition cases registered in the last 10 years, up till January 26th, 2021. “NCRB had only had data until 2019, and prior to 2014, sedition case records were not kept separately. The central government also does not keep separate records of such cases,” Mr. Kishan Reddy responded.

The answer also mentioned that ‘Public Order’ and ‘Police’ are State subjects as per the Seventh Schedule of the Constitution of India and the responsibility for maintaining law and order, including registration, investigation and prosecution of crime rests primarily with the respective State Government. “Imposition of sedition cases is strictly under the purview of the state government,” Mr. Kishan Reddy added.

This soon turned into a heated debate after Mr. Revanth Reddy inquired about the number of sedition cases registered post the 26th January violence in Delhi. “Everyone knows that the Delhi Police reports to the Home Ministry, and all we want to know is about the cases registered by them in the aftermath of the violence, especially on activists like Disha Ravi,” he said. He also inquired if the government was planning on dropping the charges especially after the Delhi court said that the Delhi Police did not have sufficient evidence to arrest her.

Disha Ravi is a climate activist from Bangalore who was arrested last month by Delhi Police for allegedly conspiring the plot for violence that shook Delhi on January 26th, 2021, after several farmers broke barricades and entered the capital.

INC’s Manish Tiwari also inquired through a supplementary question if the government was planning to bring forth any amendments in the law. Mr. Kishan Reddy responded by saying that Minister for Home Affairs, Amit Shah, was convening meetings with several academic experts to bring some changes to the law.