Decades of protests against the harmful practice of trawling during monsoon helped unite fishworkers across communities and religions to fight for their livelihood and also conserve the marine habitat.

Started in the late 1960s, the fishworkers struggle in Kerala stands as a beacon of hope and assurance to workers all over India to fight for their rights and the safety of the environment, which is the very source of their livelihood. The conflict between the traditional fishworkers and mechanized fishermen led to the death of 50 fishermen over the conflict of catching fish in monsoons and their breeding period. As many as 10 million united to protect their livelihoods by marching in protests, mobilizing hunger strikes, and filling up jails. This incident not only showed the power of united workers but also drastically reduced the damage mechanised fishing could do to the ocean fauna by overfishing. 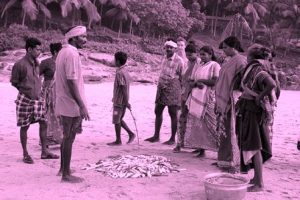 The story begins in the 1950s when the Indo-Norwegian Project (INP) was implemented in three villages in Neendakara, near Quilon, Kerala, to help modernise the medium of fishing and sanitise the water conditions. By the 1960s, India witnessed a huge surge in the demand for prawns, and sensing the need, the government started implementing modern and mechanical ways of fishing to facilitate and improve exports. INP too sensed the growing demand and shifted their goal towards harvesting more prawns. This naturally resulted in launching training programmes for fishermen to be able to use mechanical boats along with their production. Here, they were introduced to the technique of trawling, which implies fishermen use vast trawl nets to be released in water and catch a variety of fishes in bulk.

High focus on mechanical fishing drew two disadvantages into the area, mainly on the traditional farmers and on the coastal ecosystem. The ocean underwent several damages while the traditional fishermen experienced marginalisation. The use of high nets that dragged various fishes while trawling would rip the ocean floor for its many faunas and the eggs that were laid there for germination. The bulk of the fish caught would be irrespective of the species along with juvenile fishes. Repeated mechanised fishing with trawls would rip any chances fishermen with traditional methods of fishing had, as most of the fishes will be caught by machines, but it would also lower the chances of future resources as lesser fishes would be able to reproduce.

Looking Back at the Beginnings

The tensions rose when, within 15 years from 1970–1985, 50 traditional fishermen lost their lives by coming in contact with mechanised boats. Many such incidents took place during the monsoons, which was the breeding season for the fishes. Many fishermen got united into small groups as they felt an urgent need to secure their catch and their livelihood. The groups were initially built on caste or religion. The first to establish itself on a state level was the Latin Catholic Fishermen’s Federation or LCFF in 1977. The group collectively sent to the then Chief Minister of Kerala a demand for the mechanised boats to fish five km beyond the shore. Later, they added the demands of not allowing the mechanised boats to fish in monsoons and to protect the water from pollution.

In 1978, LCFF, in demand for the Marine Regulation law, went for a hunger strike with four people fasting in front of the district administration office. But the demands were not fulfilled.

On 30thDecember, the same year, Babu, a young fisherman, lost his life by coming in contact with a mechanised boat.

This triggered a series of protests and hunger strikes that demanded compensation for Babu’s death and to enforce the Marine Protection Act. Seeing the support the protest garnered for itself, the then Finance Minister agreed to every demand.

In March 1980, LCFF took the decision to label itself as Kerala Swathantra Malsya Thozhilali Federation (KSMTF) with Father Albert Parasivala as elected president. Swathantra symbolised their independence and Malsya Thozhilali meant the fishworker. This change was brought about to make the former LCFF more inclusive and to transform the fishermen into a fishworker (a worker with rights and benefits from the government). This change witnessed an increase of Hindu and Muslim fishermen in the Union. Their first achievement was when the government restricted trawling in monsoons, except in Neendakara, where the highest number of mechanised boats was available.

This decision triggered fifty fishworkers who sought to restrict the use of mechanised fishing in the monsoons. The fishermen marched their way into the office of Director of Fisheries. The fishermen were arrested and later on 25th June, Joychen Antony and Father Thomas Kocherry went on an indefinite fast. Thousands of fishermen poured their support for this movement.

At the same time, tensions grew in the KSMTF, resulting in the organisation splitting into two. One with Father Parasivala went off to create a more religiously homogeneous group, while the other, led by active fishermen, K.K. Velayudhan and Seythali, into a more inclusive group. The former got elected as the President, while the latter was made the General Secretary. Despite the split, by the end of 1984, KSMTF became the largest trade union of fishworkers.

On 13th July the Fisheries Ministry resented and asked for KSMTF to join for a meeting. Here an expert committee was formed, named the Babu Paul Commission. This commission was assigned the task of analysing the effects of mechanized trawling. Instead of banning the trawling for its environmentally degrading qualities, the committee announced no ban. It only gave a list of recommendations. However, the government failed to implement these small suggestions as well.

Seeing this, KSMTF on 10th April 1984, submitted a memorandum to the Chief Minister (CM), who ignored the suggestion. It led to massive demonstrations, marches and rallies took place with thousands of people supporting it. On May 2nd, a large sit-in was announced, and later on the 15th, A. Joseph went on an indefinite fast but was arrested within 10 days. Father Augustine replaced him and continued fasting. In the entire struggle, over 7000 fishermen were arrested and many women too were arrested for picketing highways and the fisheries office. The movement soon garnered media coverage and that forced the CM to meet the various representatives from the fishworker unions.

The CM relented to ban night trawling and assured welfare schemes worth 180 million rupees, but the demand to ban monsoon trawling was not permitted. This released another round of protest that was unprecedented in scale and support. 2 MLAs joined the hunger strike. While on 18th June all the opposing parties in the assembly staged a walkout in favour of the fishworkers, thousands of fish workers marched towards the assembly on the same day. The 50-day long agitation finally ended when the CM met the union and announced pensions for fishworkers and educational grants for their children. But the KSMTF declared the agitation will begin anew.

In 1985, the agitation began with the ‘fill the jails’ movement where over 200 fishworkers served time in prison. A series of hunger strikes began with Father Jose Kaleekal sitting on hunger strike outside the Secretariat. Over 10,000 picketed the Fisheries Post Office in Neendakara, and many amongst them were arrested. On 9th October, the CM called for a meeting with all the representatives from the different fish workers’ unions. Seeing the absence of the CM himself, the representatives walked out of the meeting. After the long struggle of 183 days, the protest had achieved wide recognition.

In 1988, seven districts observed marches for the ban of monsoon trawling but with no response from the government. 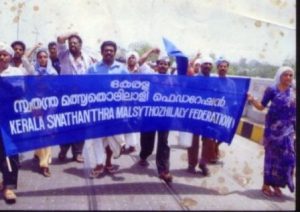 Seeing this, Father Thomas Kocherry decided to go on an indefinite fast. Soon the marches and protests began and over 1000 fishworkers picketed Kerala’s capital harbour.

On 23rd June, the government gave a ban on monsoon trawling in Kerala, exempting the Neendakara area. However, the statement was not officially released. This resulted in the closing of the agitation for the time being.

Later, a study was released on 26th June 1989 by an expert committee assigned to study marine fishery resource management, recommending banning monsoon trawling. The KSMTF intensified their struggles and organised massive state-wise protests. Victory finally arrived when the CM announced a ban on monsoon trawling in the period from 20th July to 31st August in the entire state of Kerala. Seeing the decision, the owners of mechanised boats protested against it but the government enforced the law anyway. Later, the Supreme Court too favoured the decision in the favour of fishworkers.

The fishworkers union has started to resist and protest against the free trade agreements (FTAs). They state that such agreements work to deteriorate the interests of local fighting bodies. In 2009, they sat for a protest in front of the post office, demanding to ban all such agreements that favour the free entry of imports in the Indian market. Later, they joined several fishworkers unions to form the Kerala Fishworkers Coordination Committee to oppose the Indo-ASEAN Free Trade Agreement. Their protest took many fish workers to do a sit-in outside the parliament house in New Delhi. Their resilience and struggle to attain justice are unparalleled. The fight of the fishworkers showcases the ability masses have in a democracy.

(The prime source of this article is from EJAtlas’s Fishworkers struggle in Kerala, India)