Denmark, the world’s largest mink fur exporter, produces an estimated 17 million furs per year. Most of its exports go to China and Hong Kong. Danish fur farmers have said the cull may spell the end of the industry in the country.

The Danish government is facing legal obstacles to its plan to cull all 17 million mink in the country, a measure intended to stem the potential spread of a mutated 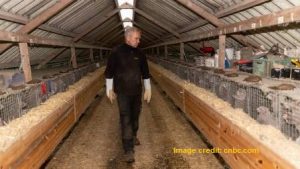 strain of the CCP virus found in the animal.

Denmark said last week that 12 people in the Nordic country had been infected with a mink-related mutant strain of the CCP (Chinese Communist Party) virus, which causes the COVID-19 disease. The British government removed Denmark from its travel corridors list on Friday, and subsequently banned all non-British visitors from Denmark from entering the UK.

The Danish government announced last Wednesday that it would cull all the mink in the country to prevent human contagion with the new virus, but has now admitted that it does not have legal basis for the order.

On Tuesday, the minority Social Democratic government will put forward hastily drawn-up legislation to back the cull, but the opposition has said it would not allow the draft to bypass the usual 30-day legislative process.

Opposition parties say the cull of healthy mink should not have been initiated before plans were in place to compensate the owners and workers at some 1,100 mink farms.

The government has said farmers would be compensated and that it would continue to seek to have the legislation passed as soon as possible.In a report published on Wednesday, Denmark’s State Serum Institute (SSI) said laboratory tests showed that the new strain had mutations on its so-called spike protein, a part of the CCP virus that invades and infects healthy cells, which poses a risk to future COVID-19 vaccines based on disabling the spike protein, the SSI said.Danish Health Minister Magnus Heunicke said last Thursday that the mutated virus had been found in 12 people—11 in northern Denmark and one in western Denmark.

On Friday, seven municipalities in northern Denmark, home to most of the country’s mink farms, went into lockdown to stem the spread of the new variant of the CCP virus.

Denmark, the world’s largest mink fur exporter, produces an estimated 17 million furs per year. Most of its exports go to China and Hong Kong.Danish fur farmers have said the cull may spell the end of the industry in the country.

(Note: This article was first published on www.theepochtimes.com)

The author is associated with The Epoch Times.