The national awards for science and technology communication were instituted by the NCSTC in 1987 to stimulate, encourage and recognize outstanding efforts in the area of science popularization and communication. 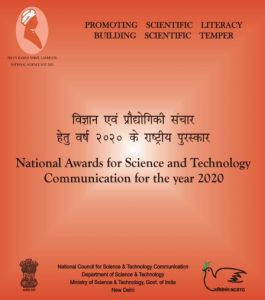 Union Minister for Science and Technology, Earth Sciences and Health and Family Welfare, Dr. Harsh Vardhan will grace the occasion and present the prestigious National S&T Communication Awards, AWSAR (Augmenting Writing Skills for Articulating Research) Awards, and SERB (Science and Engineering Research Board)’s Women Excellence Awards. He will also release the two National S&T Databases. One of S&T Awards in India and the other of academicians of Indian Origin abroad.

The Augmenting Writing Skills for Articulating Research (AWSAR) awards are focused on motivating young research scholars (PhD & Post-Doc Fellows) interested in communicating science to a broader audience. This is an annual competition announced by the Department of Science and Technology in 2018. Under this initiative, PhD and postdoctoral scholars in science and technology streams are encouraged to write popular science articles during the tenancy of their scholarship/fellowship. This initiative is aimed to foster, strengthen and create scientific temper through popular science writing and creating a culture of science communication/popularization among the research scholars.

The Database of S&T Awards in India is an attempt to build and manage the information about science and technology awards that have been instituted since 1928 in India.

It will be of immense use to the R & D and scientific fraternity in India to know about the various awards, their sponsors and the awardees. It provides data on various aspects such as discipline, periodicity, categories, awards level, chronology and state wise distribution of awards and their sponsors. The user may use it as per their requirement to cull out the desired information using this portal like by sponsors name, award name, foundation year, city, subject, awardees etc. The database is useful for planners, policy makers, funding agencies and other stakeholders to chalk out their programmes as per the priorities of R&D activities.

The database of Indian Origin Academicians has information on 23,472 Indian academicians and research scholars working in various countries. It is of immense relevance/importance in the present-day scenario where international collaborations with knowledge experts are the key factor for S&T led growth and competitiveness. The project team explored around 2,700 academic university websites to gather this information from selected countries (US, UK, Australia and Canada). It will be particularly useful to policy planners, academicians, scientists and other stakeholders in the S & T sector. It provides information on various aspects such as Name, Designation, Discipline, Area of Specialization, Alumni of Indian University/Institution, Contact details. Data collection from BRICS countries is also being attempted.