The absence of community-based rehabilitation and missing definition of reintegration are some of the concerns that need to be addressed in the Bill. 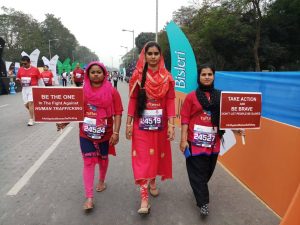 Tafteesh, an anti-trafficking forum in India, have welcomed the draft Anti-Trafficking in Persons (Prevention, Care and Rehabilitation) Bill, 2021, which is slated to be tabled in the current monsoon session of Parliament. The Bill proposes a common law to address all forms of human trafficking—sexual exploitation, forced labour, slavery and servitude, and trafficking of human organs, which should help remove prejudice towards sex work as compared to other forms of human trafficking and arbitrary inconsistencies between different legislations applicable to different forms of trafficking. However, the Bill needs strengthening of rights of survivors of human trafficking to reintegration and community-based rehabilitation. The activists believe that the Bill also needs to strengthen the role of Anti-Human Trafficking Units in different states for better law enforcement.

“The TIP Bill 2021 has built on the criticisms and feedback that the Ministry of Women and Child Development had received on the 2018 Bill. This Bill, for the first time, attempts to provide a definition of rehabilitation that includes focus on mental health and psychological recovery of survivors of human trafficking. It upholds their right to rehabilitation and compensation independent of criminal proceedings. The Bill also defines human trafficking as an organised crime with international implications, and attempts to move away from conflating trafficking with sex work,” said Pompi Banerjee, a psychologist and activist associated with Sanjog, also a member of Tafteesh consortium.

However, the absence of community-based rehabilitation and missing definition of reintegration are still some of the concerns that need to be addressed. Shelter homes have been ineffective for long-term rehabilitation for survivors and have become hubs of abuse, violence and further trauma for them. These should be considered as the last option for survivors for whom reintegration in communities is not possible. Further, it’s also important for an anti-trafficking law to define a rescue protocol that avoids forced rescue of adult persons who may have been trafficked but do not wish to get rescued—they must have alternative avenues made available to them to counter exploitative conditions at the workplace, and to avail rehabilitation and compensation services without being rescued,” she added.

“Given that human trafficking is an organised crime, this legislation says nothing about gathering intelligence and identifying organised trafficking networks or conducts any strategic investigation for identification of traffickers, buyers and users of trafficked persons for forced labour and/or sexual exploitation. There should be the inclusion of responsibilities to the NIA as the nodal agency to gather intelligence from across the country through District Anti-Human Trafficking Committees and State Anti-Human Trafficking Committees, AHTUs, NGOs and survivors and take action to dismantle the organised networks similar to strategies used against anti-drug cartels,” said Roop Sen, anti-trafficking researcher and gender rights activist who is also a member of Tafteesh.

Rammohan Nimmaraju, an anti-trafficking activist associated with HELP organisation, also a member of Tafteesh consortium, says that local police stations don’t have the expertise, time or resources to take anti-trafficking preventive measures and track the network of traffickers who target vulnerable women and girls for commercial sexual exploitation. “Moreover, the rising debt bondage of sex workers puts their children at risk of forced prostitution, and unless AHTUs are empowered to take action to break nexus between money lenders, pimps and brothel owners and managers, the entry of children of sex workers, especially young women between 18 and 21 will seem consensual,” he said.

“AHTUs which have been mandated by the Ministry of Home Affairs and have budgets allocated for conducting interstate investigation should be defined under this Bill, and their roles and responsibilities vis-à-vis investigation, coordination with the Agency should be clarified keeping in alignment with the MHA guidelines, added Krithika Balu, a Bengaluru-based human rights lawyer and researcher.

Kaushik Gupta, a Calcutta High Court lawyer, who is also a member of Tafteesh, highlighted that the draft TIP Bill at present is largely silent on rescue protocols except the “reason to believe” by a police officer not below the rank of a sub-inspector. “This makes the role of the AHTUs unclear in the rescue and post-rescue processes. Further, Section 26, subsection 4 in the TIP Bill 2021 empowers the court to give a mandatory death sentence to a repeat convict. However, as per Judgement of SC in CRIMINAL APPEAL NO.117 OF 2006 State of Punjab vs Dalbir Singh and 1983 AIR SC 473: 1983 SCR (2) 690 MITHU Vs STATE OF PUNJAB, there cannot be a mandatory death sentence. The death penalty has not been proved to be an effective deterrent to any crime, rather it has worked against the conviction of offenders since harsher the punishment, the stricter the requirement of proof,” he pointed out.

“From Tafteesh, we have given our recommendations to the MWCD and we wish the Bill with all these changes gets passed in the Parliament in the upcoming monsoon session,” Pompi added.

Tafteesh is a platform for anti-trafficking stakeholders including lawyers, researchers, psychologists, social workers and survivors of trafficking. For more information, visit: www.tafteesh.org

Utthan and VIMUKTHI, Survivor Leaders’ Council, are a collective of survivors of human trafficking which is also a member group of Indian Leadership Forum Against Trafficking (ILFAT).