There exists no shortcut to protect the livelihood of people and environment. Both these aspects are interlinked and the draft Environmental Impact Assessment Notification 2020 fails to consider the same.

Economic development and job creation have been India’s daunting challenges, which continue to remain in paramount priority for the government. India’s hike in the 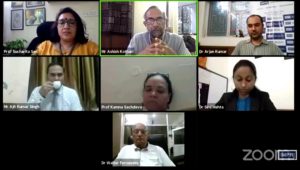 World Bank’s Ease of Doing Business ranking is complemented with a successive downturn in its position on the Environmental Performance Index (EPI) from 2014 to 2019. According to Global Climate Risk Index 2020, India is the fifth most vulnerable country to climate change.

The Ministry of Environment, Forest and Climate Change (MoEFCC) released the Draft Environmental Impact Assessment (EIA) Notification, 2020 on 23 March 2020, which has been highly debated. The provisions and clauses of the draft raise concerns over its transparency and making public participation unrealistic and unfeasible, while on the flip side vindicating post facto environmental clearances amid other problematic provisions. With this background, the Center for Environment, Climate Change and Sustainable Development (CECCSD) at Impact and Policy Research Institute (IMPRI), New Delhi, and the Department of Energy and Environment at the TERI School of Advanced Studies (TERI SAS), New Delhi, with India Water Portal as Media Partner organised a talk on Draft Environmental Impact Assessment Notification 2020: Reflections and the Way Forward.

While participating in the discussions held Dr D Raghunandan, Former President, All India People’s Science Network, shared that actions were made in corporate interest over the natural environment and livelihood of people, especially on those who are dependent on these natural resources.

Extremely poor implementation and monitoring along with weak capability of the Pollution Control Boards (PCBs) have weakened environmental regulations.

The present draft seeks to bypass the rulings of judicial bodies in a de jure manner. There has been a reclassification of projects as A, B1 and B2 where large numbers of projects were placed under B2 category under which no approval or public hearing is required. This B2 category was originally meant for artisanal groups such as potters. The strategic projects should also be subjected to environmental appraisal and related information should be in public domain. Post facto clearance, an egregious provision of the draft EIA 2020, goes against the rulings of the Supreme Court and the National Green Tribunal (NGT).The draft is a centralised environmental process where even the State Impact Assessment Authority (SIAA) is constituted by the Centre. This has reduced transparency and slashed accountability, dismantling the environment regulations.

Prof Sucharita Sen, Professor, Jawaharlal Nehru University, New Delhi, shared that the draft EIA 2020 violates the Environmental Protection Act, 1986, which pledges to protect and improve the environment. The new provision for 30 days is a very minimal time period for the people to comprehend all the details and form a collective opinion about the project. The draft doesn’t empower citizens to file violations and non-compliance reports. Citizens and action groups have brought 99.9 percent of violation cases to authorities. Many development projects are urban centric and large number of irrigation projects and inland navigation are outside the ambit of EIA. Post facto approvals of environmental clearance pre-empts the possibility of rejection and enhance the industry to pay for violations. Lack of information leads to lower level of public accountability. The approval of permission is more ad hoc as it depends on the industries nature of association with the state.

Leo Saldanha, Founding Trustee and Coordinator, Environment Support Group, Bengaluru, shared that public hearings were not made mandatory till 1997 EIA notification, and were held at the discretion of administration. The 1997 EIA notification marked the beginning of democratisation of environment clearance. The public hearing provisions in the draft notification have completely abandoned the great promise in 243 z(d) and 243 z(e) of the Constitution, which deals with district planning committees and metro political planning committees. EIA as an instrument has always been manipulated to political will. Environment governance should be nested with rural and urban governance.

The National Environment Policy dictum was to follow the recommendations of Govindrajan Committee, which says that environmental clearances act as a hindrance to development. The Draft EIA 2020 suppresses the rights of people, especially adivasis and coastal communities.

“Draft EIA is India’s Environment George Floyd’s movement”, said Ashish Kothari, Founder-member, Kalpavriksh, Pune. Environment has been considered nominal when compared to the notions of development. There is need to challenge the notion of development and necessary to rethink about development, progress and well being in the ambit of environmental ecosystem. 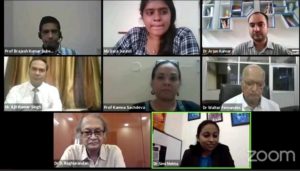 Notion of environmental justice has not been a part of the draft EIA 2020 and it is intertwined with issues of social and economic injustice. The SDG8 of Economic Growth is inherently contradictory since economic growth has caused global environment problems. There is an increase in the merging of state and private entities and the resources are taken away from the communities who have managed it for centuries.

Ajit Kumar Singh, Additional District and Sessions Judge, Bihar, while highlighting the centralised draft mentioned that Article 48A obligates the state to endeavour to protect and improve the environment and to safeguard the forest and wildlife of the country. The people of this democracy concern the environment as evident by 1.8 million public suggestions received by Environment Ministry for this draft. Singh highlighted the judgement of the Supreme Court in the case Alembic Pharmaceuticals Ltd v. Rohit Prajapati & Ors, Civil Appeal No. 1526 of 2016, which stated the post facto clearances are antithetical to environment jurisprudence and is detrimental to the environment.

The legal framework of the Environmental Protection Act, 1986 and judicial pronouncements should be considered before releasing the final draft.

Sara Suresh, student of Symbiosis Law School, Pune, shared the report “City in the Forest: The Birth and Growth of Indian Institute of Technology-Madras” by Chennai Solidarity Group in 2013, which states that during the time period of 2001–2013, IIT Madras was granted environment clearance by sending a mere apology. The draft EIA notification mandates the project proponent to submit compliance report once in a year, which seems problematic, as evident by the incidents of LG Polymers in Vishakhapatnam, Vapi in Gujarat, Oil India Limited blowout in Assam and illegal mining in the forest of Dehing Patkai Elephant Reserve.

Dr Walter Fernandes, Director, North Eastern Social Research Centre, Guwahati, said that a weak EIA has been made weaker through this draft and this situation demands massive mobilisation of people. There exists no shortcut to protect the livelihood of people and environment. Both these aspects are interlinked and the draft fails to consider the same.