Both the rural non-farm and urban informal sectors will require special attention of the policy makers.

Employment problem in a developing country context cannot be gauged merely in terms of open unemployment rate. The phenomenon of working poor engaged in low productivity 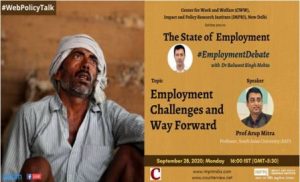 activities with meagre earnings is a vast manifestation of the employment problem in a country like India. The periodic labour force survey (PLFS: 2017–18) witnessed a rise in the unemployment rate, which was also accompanied by improvements in educational attainment. Besides, the positive association between the rate of urbanisation and unemployment was evident.

These patterns perhaps can be taken as a sign of maturing of the economy, indicating that people could afford to remain unemployed till they found a job of their desirable status. Interestingly, the relative size of the informal sector slithered which could further substantiate that people were not under compulsion to get residually absorbed in petty activities. With such positivity as the economy was aspiring for rapid economic growth the pandemic struck the world and hit the Indian economy with utmost adversity in terms of widely prevalent livelihood loss at various levels.

There has been a close link between rural-urban migration and informal sector employment, indicating transfer of rural poverty to the urban space. Although parts of the informal sector have been growing in response to demand, the vast stretches of low productivity activities cannot be ignored, and they do unravel significant overlaps with urban poverty and slum dwelling. However, several of the workers have been residing in the urban space for more than a decade and it would be highly erroneous to interpret urban poverty purely in terms of the spill-over effect of rural poverty.

In fact, the elasticity of urban poverty with respect to rural poverty is highly nominal in spite of being statistically significant. Hence, the importance of public provisioning of work opportunities in the urban context must be felt at the policy circles. Although some of the jobs in the informal sector help reduce poverty, the recent pandemic has affected those processes miserably. While certain segments of the informal sector bear strong linkages with the formal sector through the processes of ancillarisation, business subcontracting and a great deal of complimentary activities, possibilities of exploitation, particularly with the operation of the intermediaries and contractors, have been there on a large scale to reduce the pace of upward mobility.

Poverty in the rural areas persists both in the agricultural (farm) sector and the non-farm sector.

Mechanisation, water shortage and climate change effects have rendered agricultural labour redundant, and disguised unemployment has been significant. The lack of demand induced activities in the rural non-farm sector has led to the supply-push phenomenon. Marginal activities may raise the share of non-agricultural sector, and the process of urbanisation may have been underway, but that does not result in sustainable development and livelihood.

The massive growth of the ‘census towns’ (2532 in number) between 2001 and 2011 is a witness to this fact (during 2001–11 number of statutory towns increased by 242; at 2011: statutory towns- 4041, census towns- 3894). Rural transformation was not accompanied by the growth of demand induced activities and the emergence of the new towns (not recognised by the government as statutory towns) is rather a misleading process if urbanisation has to be taken as an indicator of development. The expansion in the city limit and the rural hinterland being considered as a part of the city agglomeration is interesting but whether it is able to create employment opportunities for the rural population is an important question. A continuous change in the land utilisation pattern has rendered many farm households redundant and jobless. The policy interventions will have to reflect on these rapid changes that have been occurring in the recent past.

The agglomeration economies or external economies are important which result in higher productivity growth in large cities. Both the producers and the workers try to locate in such spaces as concentration raises the efficient utilisation of resources and reduces the job search cost simultaneously. Part of the productivity gains are transferred to the workers in terms of higher real wages which is known to the potential rural migrants. Hence, the population movement process from the rural space gets directed to the large cities. The caste-kinship bonds and other informal networks, which facilitate the job market information flow and help the potential migrants shift to the urban space, involve a strong inclination in favour of the large cities in spite of land and housing scarcity.

The policy initiatives will have to recognise this fact that though the rural to all-urban migration rates are moderate, the rural to large city migration is rapid and rational from the point of view of the migrants. Hence, an exclusionary urban policy is not the right method of reducing the city burden; rather creating amenities and empowering the poor to take advantage of the agglomeration economies should be a cost reducing way of generating growth with creating employment.

The periodic labour force survey (2017-18), which has information on the same households over different sub-rounds within a year shows that some workers do not remain within the same activity throughout. They keep depending on different activities in different seasons or keep shifting from one activity to another as sustainable livelihood sources are shrinking. 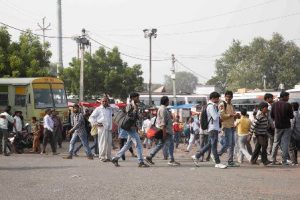 The livelihood diversification strategy is beneficial for the households as it helps smoothen the consumption expenditure. Else, fluctuations in consumption can push some of the households, particularly those marginally above the poverty line, into the domain of poverty and such fluctuations affect productivity of the workers severely. However, in several occasions, households remain below the poverty line in spite of pursuing multiple sources of livelihood. Due to the lack of gainful employment they strive hard engaging in a number of petty activities.

The recent pandemic and the subsequent lockdown wiped away the sources of livelihood, particularly in the urban space, and more so in large cities, which kept attracting the migrants on a significant scale. The return migration occurred, raising the vulnerability of the workers. The regions which had witnessed lower unemployment rates before the pandemic, experienced a hike. Regions with higher levels of urbanisation and large cities and with higher rates of rural-urban migration are the ones which encountered massive increase in the unemployment rate.

The complete close down of the informal sector forced millions of workers to become openly unemployed and could bring in considerable overlaps between unemployment and poverty, a situation quite opposite to what prevailed during normalcy as unemployed were usually those who could afford it. There has been a severe stress in the rural sector: those who have returned to the rural areas cannot get absorbed in gainful activities as the rural non-farm sector hardly comprises demand induced activities. On the other hand, the agricultural sector has already been in a state of excess-supplies of labour. The return migration only meant the same activity and income being shared by many, which again adds to the pathos of the working poor.

From these nightmares certain lessons can be drawn for the future. In fact, it is high time that the strategy of rural industrialisation must be pursued which can contribute to the overall industrial growth of the nation and generate employment opportunities for the rural population and the migrants who have returned to the rural areas.

The rural infrastructure building programmes along with major irrigation projects can offer livelihood to many, and on completion of the construction activities new opportunities will emerge for inclusive growth to take place.

The entire rural economy needs massive investment for which the government will have to take a great initiative.

As the economy emerges gradually from the prolonged lock down it is time to have a new vision for the urban informal sector. What safety-nets can be provided to the workers to create sustainable sources of livelihood is an important question. In activities where people take self-initiative credit assistance can be provided. More informative support for product innovation and marketing can be extended through online services. The lack of legal security of space for the operation of the informal sector enterprises is a major problem which has resulted in poor marketing of goods and profitability.

The introduction of training for the informal sector workers will contribute to skill formation and facilitate upward mobility. Recognition of the skill acquired through informal channels may expand the scope of gainful employment. The linkages between the formal and the informal enterprises will have to be strengthened and the roles of the intermediaries need to change drastically. Though the recent reforms of labour codes say goodbye to the inspection raj in the organised sector, how the exploitative roles of the business and labour contractors can be changed is a critical question. Workers in retail trade and services within the informal sector are not the same as the production workers.

On the whole, both the rural non-farm and urban informal sectors will require special attention of the policy makers and for the post-pandemic and lockdown period sincere efforts will have to pursued to develop these sectors with great potentiality for creation of sustainable livelihood.

(This is the excerpts from the Special Talk given by the author at the “Employment Debate: The State of Employment” organised by the Centre for Work and Welfare (CWW), Impact and Policy Research Institute (IMPRI), New Delhi)