Fighting patriarchy with young women and men who believe in independence, equality, mutual respect and human dignity is important.

Patriarchy is a malaise that women and men have suffered since ages, sometimes knowingly and most times, unknowingly. It has been inflicted upon humankind from early barring the 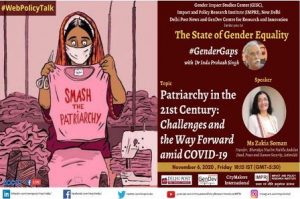 pre agriculture period of matrilineal social system. Patriarchy is a scourge comparable to death, disease-epidemic, poverty, natural calamities, wars and conflicts, and it is common knowledge that inequality between women and men is still prevalent in modernised and advanced era of 21st century.

Patriarchy is a system of domination of one sex over other where a few powerfulindividuals and systems control the other sections of society. It is characterised by men having power over women. Although, both men and women can be victims of this system of dominance and control, it pervades all sphere of human life ranging from personal, political, professional to community and society. The victims of this system are dominated by mindsets, attitudes, behavior and norms based on views framed largely by men.

This age-old system has survived over the years and has evolved with humankind simultaneously adopting different systems of governance such as monarchy, autocracy and even democracy. It has adapted, mutated, transformed and enmeshed itself with evolving structures, but it never faded away. This pervasive structure is omni-present in both poor and developed nations.Nexus between caste, religion, ethnicity and patriarchy is the worst form of domination smashing the lives of women.

Highly diverse and democratic nation such as India is enmeshed with the functioning of politics and religion simultaneously leading to orthodoxy, misogyny and violence against weaker section of society. Political figures with medieval mindsets are the torch-bearers of misogyny and social division. Politicians in Indian sub-continent of all hues make mockery of constitutional values of gender justice and gender equality to guard ostensible religious norms and male superiority. It assigns secondary status and pre-set roles to women in family and in society.

Constitutional guarantees for women’s rights, justice and equality are routinely violated by the patriarchal mindsets emanating from religion. There is a clear gap between practices in society and the constitutional provisions. The problematic behaviour emanates from religious texts such as Manusmriti, Old Testament and different Hadees. “Never trust women, women are evil creatures, women are brainless creatures, women must be beaten with sticks” … these highly unacceptable statements are found in these books. These texts went on condemn women as demons, trouble makers, witches, sexually lustful creatures, threats to social order and social balance, thus, wanting so-called masculinity to control and rein women.These scripts continues to guide the conscience and common sense of people regarding women.

Even many religious sources provide well-developed logic based on misogynist mindsets in the form of anecdotes, sayings of religious figures, verses, commentaries, etc.

The misogynist mindsets dominate behaviour in real life as evident from the statue of Manu in the High Court of Jaipur. Instant triple talaq has been the most common method of divorce in India. This shows relations formed due to wedlock continue to be dominated by patriarchal norms apparently based on religion. Family have remained a basic unit of patriarchy since it is empowering for some, but disempowering to most. The pre-defined roles of daughter, wife, or daughter-in-law draw legitimacy from perceived religious diktats and injunctions. Depending on which religion you belong to marriage is either sacred relation – janam janma ka sath or it is a social contract with fixed roles giving secondary position to wife. Society believes women education will give them liberty threatening their powers and survival in the world.

In the names of religion, misogynists have snatched women of authority in any religion. Religions are being nurtured by malesproviding miniscule space to women in decision making related to religion. It solidifies women’s secondary position in family, community and society. Men of religion form rules and regulations that strengthen male superiority and privilege. Institutionalised religions help in maintaining the male-dominated order and justify subjugation of women through various cultural norms and practices.

State participation and accountability in fighting patriarchy is very important. Unfortunately, country is witnessing a heightened religious polarisation in current times. Political patronage in sensitive cases of rapes, honor killings and sexual assaults on women during communal riots can be observed in India. Sexual assaults and violence on lower caste women goes unpunished. The so-called love jihad laws are giving rise to demonisation of minorities and are undermining the Hindu women’s right to choose her own life partner also creating a wedge between Hindus and Muslims. Medieval notions like women being community property are being enhanced by such ordinances.Such ordinances depicting religious hate are violating the constitutional right to freedom, personal liberty and privacy.

With liberalisation in 1990s, women found freedom of movement for education and work. However, it led to huge backlash on women in the form of increased violence. Education and workplace of women rewarded them in the form of challenges such as harassment, stalking, acid attacks, sexual assaults and rapes. Even today, technological age have modified the crimes in the form of cyber stalking and violent threats from trolls.

How do we fight patriarchy? Gender sensitivity and understanding would dismantle this system.

Penalty of death to rapists and encounter killings are being built into the policies and laws of several states, but still justice is delayed. There is a need for social order based on liberal humanism and constitutional values of mutual respect, equality and justice. However, the challenge of making rhetoric of gender justice and equality legible remains. The inclusion of women from poorer and marginalised sections in mainstream society is still a challenge. Atrocities towards them should be accounted not ignored. There is need for greater state accountability. Women’s reservation is required. There is need to rope in family and community structures and free them from the shackles of obnoxious versus of different religions.

South Asia isa strange place where women such as Indira Gandhi, Benazir Bhutto, Sirimao Bandarnayake, Sheikh Hasina had beenin power unlike the developed parts of the globe. But, their being at the helm did not translate into better lives for women in the sub-continent. Perhaps it speaks volumes about the kind of society we are!

Fighting patriarchy with young women and men who believe in independence, equality, mutual respect and human dignity is important. No doubt, it will be a long drawn struggle which require all co-travelers to join hands. Small measures such as webinars and awareness programs can change and question the mindsets. There is need to spread civic consciousness and nationalism about justice and equality for all.

Note: Excerpts from the webinar “Patriarchy in the 21st Century: Challenges and the Way Forward amid COVID-19”organised by Gender Impact Studies Center at IMPRI, the Delhi Post and Gendev Centre for Research and Innovation, Gurugram.

Focus on Management of Adverse Events in COVID-19 Vaccination