Government should withdraw the three Acts as they are violative of the rights of adivasi and forest dweller communities and in contravention of their constitutionally recognised rights to self-governance and to control over their own resources.

The three Farm Acts introduced by the Government of India without adequate democratic consultation are the subject of much debate and ire presently. While much has been said about the 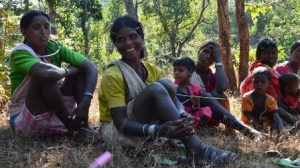 likely adverse impacts on the status of farmers, the Mahila Kisan Adhikar Manch (MAKAAM) has sought to highlight the concerns of those farmers at the margins, including women farmers, who are largely invisible as household unpaid labour, or tenant farmers or agricultural labourers. Marginal women farmers and those who are forest dependent communities are seldom recognised as farmers.

The forest dwellers are seldom considered as farmers given their forest dependent status. Yet forest dwellers have managed their farming livelihoods through collection of forest produce along with cultivation on small plots of land within the forest regions largely in traditional ways such as jhum and scatter farming, and primarily depended on the produce for their as well as bringing produce from farms and forests to markets to sell in the markets or to local traders. They also manage their diverse ecological resources to subsist from the forests and farming activities.

With the depletion of their own resources or denial of access to forests they have been compelled to move as agricultural or casual migrant workers to other occupations and regions in quest of wages.

Their regions are least served by educational institutions and by formal banking institutions and infrastructure that are necessary to empower them to access services and engage with market processes and institutions. Populations in these regions report among the worst situation in terms of nutritional status and are grossly under served by the PDS (notwithstanding the ways in which the PDS system has focussed on cereals that undermine the significance of local grains in the adivasi and forest dwellers food basket), while being dependent on local moneylenders and traders for needs of credit and inputs. These regions are also sparsely served by mandis and much of the sale of local produce occurs through local traders. It is necessary therefore to consider the likely fall outs of the three farm Acts on their economic, social and cultural processes in forest areas and among forest dwellers, the majority of whom are adivasis and nomadic pastoralist with a high dependency on natural resources for their subsistence and livelihoods and ecologically embedded socio-cultural practices to sustain their lives and livelihoods.

Discrimination in an Unequal World An Alien Paradigm

The three agriculture Bills passed by voice vote by the central government would adversely impact the majority of women farmers, who form the bulk of the small and marginal sections in the Indian agricultural sector as well as a majority of the women agricultural workers, who are dependent on the sector for their survival and livelihood. They would also likely increase the hold of private agricultural companies and their intrusion into forest regions, causing adverse impact on forest biodiversity by promoting market driven over-extraction of natural resources, as well as impact food sovereignty rather than ensuring judicious marketing of forest produce by state sponsored agencies in keeping with commitments of our government to forest management and conservation and climate mitigation policies. The intrusion of such companies would especially impact adivasi women, who are mostly dependent on forests for their livelihood in several ways – they would erode the forest rights to their forest resources entrusted by the constitution to the forest dependent people in the scheduled areas. They would further deepen the cleavage caused by agricultural policies that follow the green revolution pattern of agriculture of destruction of natural forests and forest-based farming systems towards cash crops and intensive farming methods; promotion of deep tillage and high inputs from private companies and promotion of tobacco, cotton, bio diesel, palm oil and other oil-seed plantations etc on contract basis.

At the outset, the three farm Acts are inconsistent with the key provisions of the Panchayats (Extension to Scheduled Areas) Act, 1996 (PESA) and will adversely impact the interests of the tribal communities and more particularly the women in these communities. Under the PESA Act,1996, the Gram Sabha or Gram Panchayat (where the case maybe) is recognized as “competent to safeguard and preserve the traditions and customs of the people, their cultural identity, community resources and the customary mode of dispute resolution” and have the powers to prevent alienation of land in the Scheduled Area, have ownership of Minor forest produce and have the powers to govern/manage the village markets in all the scheduled areas. The three farm acts, especially those related to legalizing Contract Farming, and establishment as well as opening up of new private trade areas or markets, potentially undermine the role of Gram Sabhas and Gram Panchayats in the scheduled areas and pose a threat to their natural resources.

For instance, as per the Andhra Pradesh PESA Rules, 2011 (later adopted by Telangana State too), the Gram Panchayats shall also act as market committees in the scheduled areas.

They are empowered to regulate the making, execution, enforcement or cancellation of agreement of sales, weighment, delivery, payment and all matters relating to the marketing of agricultural produce, including marketing of NTFP, livestock and related products and all matters ancillary. The new laws erode and undermine the critical role of these market committees in scheduled areas, headed by the sarpanch of Gram Panchayats.

Given their lack of awareness and exposure to market processes and in the absence of the regulatory/governance safeguards offered by the village Marketing Committees, tribal communities in general and women in particular are more vulnerable to exploitation by outside parties who may exploit them in contract farming negotiations and to traders who will now have the freedom to enter into trade and marketing contracts with anyone in scheduled areas.

It is now a well-known fact that women in all the tribal communities play a key role in agriculture and allied activities as well as in the collection and sale of various kinds of minor forest produce, along with sale of agricultural and livestock produce including poultry and fish etc in the local shandies and weekly haats. Under the new trade and marketing regime ushered in through the new laws, the terms of trade and exchange are especially likely to be weighed against the interests of large sections of these women, who are mostly non-literate and do not have the knowledge or capacity to engage in trade on an equal footing with more informed and powerful external traders or powerful agribusiness entities.

Further, the PESA rules also provide for the settlement of all disputes between sellers and buyers, arising out of any transaction related to marketing of agri produce to the respective Gram Sabha or Gram Panchayat. The new farm laws run counter to the spirit of local governance of markets, as envisaged under PESA, while seeking to dismantle the role of local institutions and handing over the dispute resolution functions to the Sub-Divisional Magistrate under the new framework.

The new push for written agreements between farmers and sponsors along with a third party, prior to production and purchase of farm produce are particularly detrimental to the interests of tribal and other forest dwelling communities and their control over key resources such as land, forest resources and commons as well as their specific production systems. Here again, the likely replacement of subsistence food production systems designed around household food security where women play a major role with more commercially lucrative, monoculture varieties of crops will potentially erode household food security and again disproportionately impact women in these communities. This will also prove detrimental to the availability of food and sovereignty over food systems.

In a context where the scheduled areas are already experiencing a rapid decline in forest cover and biodiversity due to commercial felling of trees, diversion of forests for extractive mining, construction of dams, infrastructure projects and forest plantations etc, the new laws will have potentially negative consequence on the environment. The new contract farming and market reforms will likely entail a shift in agricultural production systems and practices towards commercial varieties with excessive use of chemical fertilisers and pesticides with adverse consequences for soil, water and overall environment. This may also pose a threat to the sustainability of uncultivated forest foods that communities depend upon especially during crisis such as famine and drought.

Lastly and significantly, there is enough evidence to suggest that poor tribal households are among the largest group dependent on the Government run public distribution system in the country. With the onslaught of development mining and other projects likely to deny them of their access to resources, and the diversion of cropping patterns towards commercial rather than subsistence farming through incentives, purchase assurance, contract farming etc. this dependency on the ration supplied through the PDS is only likely to grow, signalling a need to streamline and enhance the allocations for the same. With the key amendments to the Essential Commodities Act that are set to be rolled out, the tribal communities will be severely adversely affected in terms of food security in future.

The role of Gram Panchayats in the scheduled areas in the functioning of fair price shops and D.R. depots is also likely to be further eroded in the long run.

Women among adivasi and forest dwelling communities have additionally had to deal with the exploitation and violence of development actors and state machineries in claiming even those rights enacted to protect them and the natural resources on which their lives, livelihoods and socio – cultural practices are dependent. The incidence of such violence is likely only to be enhanced when women are confronted by an onslaught on their production and cultural systems, and the intrusion and capture of institutions that the Farm Acts are likely to bring in their wake.

MAKAAM has called for a withdrawal of the three Acts as violative of the rights of adivasi and forest dweller communities and in contravention of their constitutionally recognised rights to self-governance and to control over their own resources and urges the government to instead make stringent efforts towards strengthening the mechanisms for implementation of PESA and Forest Rights Acts with a focus on women farmers to benefit from these constitutional guarantees.