First ‘Made in India’ Cervical Cancer Vaccine in the Offing

The vaccine would be launched once an adequate quantum of doses is manufactured and ready for distribution. 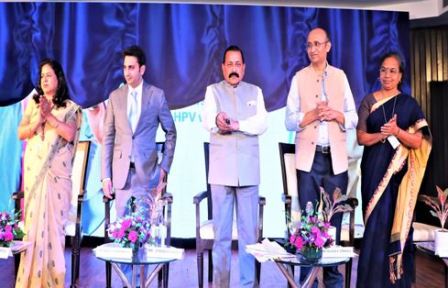 Announcing the completion of all the stages of scientific research on the quadrivalent Human Papilloma Virus (qHPV) vaccine in the making for the past decade, the Minister lauded the efforts of the Department of Biotechnology (DBT) and its public sector undertaking, the Biotechnology Industry Research Assistance Council (BIRAC)in achieving the feat. ‘It takes India a step closer to Prime Minister Narendra Modi’s vision of Atmanirbhar (self-reliant) Bharat,’ said Dr Singh.

Pointing out that Cervical cancer ranks as the 2nd most prevalent cancer in India and accounts for nearly one-fourth of the world’s cancer deaths despite being largely preventable, the Minister recalled that current estimates indicate that every year approximately 1.25 lakhs women are diagnosed with cervical cancer. Over 75 thousand die from the disease in India.

Referring to the Prime Minister’s visit to Zydus Biotech Park in Ahmedabad, Bharat Biotech in Hyderabad, and Serum Institute of India in Pune in November 2020, to personally review the vaccine development and manufacturing process for COVID, Dr. Jitendra Singh recalled that the Prime Minister had then underlined that “India considers vaccines as not only vital to good health but also as a global good, and India has to assist other countries, including the nations in our neighbourhood, in the collective fight against the virus”.

He also pointed out that within a year of implementation, the Mission COVID Suraksha demonstrated significant achievements, such as the development of the World’s first DNA Vaccine for COVID-19 by Cadila Healthcare and support for developing India’s first mRNA Vaccine and intranasal vaccine candidate against COVID-19.

Noting that the new vaccine against cervical cancer, which has been named ‘CERVAVAC’ has been developed by Serum Institute of India Private Limited and is an outcome of a partnership of DBT and BIRAC with the Bill and Melinda Gates Foundation, the Minister stressed the need for academia, research and industry to become equal partners in the true spirit of an integrated approach for result-oriented products.

Several critical initiatives are currently being implemented to promote basic and translational vaccine research, including the Indo-US Vaccine Action Programme, National Biopharma Mission, and Ind-CEPI Mission, besides Mission COVID Suraksha, which was launched as part of Atmanirbhar Bharat 3.0, to bring a safe, productive, affordable, and accessible indigenous COVID-19 vaccines to the citizens of the country at the earliest, he added.

Dr Rajesh Gokhale, Secretary, DBT, Dr N. Kalaiselvi, DG, CSIR, and Mr Adar C. Poonawalla, CEO, Serum Institute of India, Pune, hoped that the successful development of the new vaccine would act as a catalyst for greater collaboration between researchers and the industry in the country.

Film star Manisha Koirala, who bravely fought and won the battle against ovarian cancer, joined the function virtually and thanked all the stakeholders for bringing out the vaccine. “It is a great day for women in India and the world over,” she said.