The development and dissemination of stress-tolerant, high-yielding, early-maturing and nutrient-rich varieties will further boost rice production in the country. 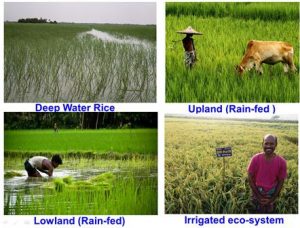 The world-wide climate action initiative ‘Global Commission on Adaptation (GCA)’, in its high profile meeting held at Dhaka, has identified six areas of intervention for climate change adaptation in Bangladesh. Among the all six action tracks Agriculture and Food Security was one of the most important one. Commission seeks to deliver concrete and meaningful action under five priority actions for Bangladesh. They are: a) Scale up of investment in demand-led agricultural R&D; b) Facilitating smarter incentives and policy frameworks for transformative climate outcomes in agriculture; c) Scale up access for small-scale agricultural producers to markets, finance, insurance and social safety nets; d) Expanded coverage and use of climate- and weather-informed digital agricultural advisory services; and e) Improved access and use of adaptation technologies, with a focus on agro ecological practices.

Bangladesh is very much keen to implement all the five priority action tracks. Bangladesh Rice Research Institute (BRRI) is of the key organisation that works directly to implement and achieve priority track number a, b, d, and e, as mentioned above. Food security is not a permanently achieveable target. Rather, it needs continuous and persitant efforts to maintain and sustain for a long time. BRRI’s R&D has been oriented to achieve and sustain it. Since Independence the country’s population has increased two and half fold, but rice production has increased more than three and half fold, which reflects the success story of its scientists, extension agents, farmers and pro-agriculture government.

Also Read : Rice: The Stepping Stone in the Rise of Bangladesh

There is lot of climate change impacts on rice production. Considering all the climate vulnerabilities, BRRI has so far developed total 24 stress-tolerant rice varieties of which 11 are saline tolerant, three submergence-tolerant, three drought-tolerant, four cold-tolerant, two tidal-submergence tolerant, one semi-deep water and one dual (Sal+Sub)- tolerant. Most importantly, all the 24 stress-tolerant varieties developed during the last 11 years have contributed a lot to boost up rice production of the country. Many more advanced breeding lines have been screened to identify materials tolerant to different abiotic stresses like salinity, cold, high temperature, flash flood, etc., which are in the pipeline to release soon.

Using climate smart varieties and with the ccombined efforts of farmers, rice scientists, extension personnel and Government of Bangladesh have enabled the country with a surplus of about 4 MT of rice.

The crop growing environments of Bangladesh are very much diverse, varying from the drought-prone high lands in the north-west, the flood-affected central region, the coastal saline zone in the south, Haor in north-east and Hills in the south-east. Major stress-prone environment is salinity prone coastal zone constituting about 105.6 million hectares. In addition to salinity, water stagnation is another problem in that ecosystem. Challenge is to increase productivity through multiple climate-resilient interventions.

Addressing that challenge a total 11 salinity tolerant varieties have been developed for wet and dry season. Of them, BRRI dhan 47 and BRRI dhan 67 are the two promising salt-tolerant varieties for dry season having 6–8 dS/m salinity tolerance during whole lifecycle and 4.5 to 7.5 t/ha yield potential. Out of 105.6 million hectares of saline area about 35 per cent areas are covered by BRRI-released salt-tolerant varieties, which contributed to 10 per-cent of total rice production. For example, of a recent success, Moharajpur, a village of Koyra, Khulna is one of the extremely climate vulnerable areas in the coastal zone, which remained fallow in dry season. However, the salinity tolerant variety BRRI dhan 67 has been successfully cultivated last year. Farmers are very happy as they got >7.0 t/ha yield/ha. Importantly, this type of horizontal expansion of MV rice has taken place with huge impact on the livelihood of marginal farmers.

Drought is a problem in rice cultivation in both vegetative and reproductive stages in >3.0 mha areas. Drought-tolerant wet season varieties were developed like BRRI dhan 56, BRRI dhan 66 and BRRI dhan 71. Of them BRRI dhan 71 is getting quick popularity in North-Western Barind Tracts having 5.5- 6.5 t/ha yield potential with shorter growth duration 115 days. Out of the total drought area 12 per cent comes under rice cultivation, contributing 8 per cent to the country’s total production. Due to decrease of upstream flow and climate change, char land areas are increasing. Dry, direct-seeded aerobic rice varieties are one of the good adaptation options in this unfavourable environment. However, some deep-rooting crops like maize, pumpkin, chili, etc. are well adapted and are being scaled up. 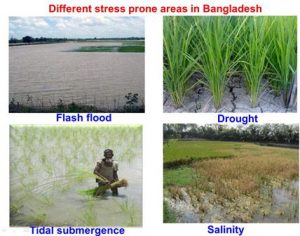 BRRI-released submergence-tolerant verities were grown in 26 per cent submerged areas, which contribute 9 per cent of total production. About 5700 hectares of land are now under rice cultivation using BRRI-released dual-tolerant (Sal+Sub) varieties, which was never been rice cultivable. However, production contribution of stress-tolerant varieties is about 10 per cent in normal year, with about 80 per cent yield advantage in stress year. Noticeably, stress-tolerant varieties contribute around USD 1525 million yearly.

In Bangladesh, a total >2.0 mha rice areas are affected by flash flood submergence. It may affect complete damage to the crop plants. Wet season rice is generally affected during vegetative stages. Dry season (Boro) rice is also affected at the reproductive stages by early flash flood in the Hoar areas, which is low lying basin in the north-eastern part. The 03 flash flood-tolerant varieties like BRRI dhan 51, 52 and 79 have been developed having 2–3 weeks of complete inundation tolerance and can produce more than 80 per cent yield benefits under stress condition.

Tidal flood prone ecosystem covers 0.8 mha in the southern coastal region. Generally, low-yielding indigenous cultivars are grown there. BRRI has developed two varieties of BRRI dhan 76 and 77 having adaptation capacities in that environment with 1.5-2.0 t/ha yield advantage over local cultivars and create a significant impact to the farmers.

In Bangladesh >2.0 mha areas are affected by different scales of cold injury. Severe cold in mid-December to early January hampers seedling rising in north-western region. Seeding with water receding in Haor ecosystem in October causes severe sterility due to cold injury (<18–20°C) in last January to February. The earlier developed four cold-tolerant varieties have only tolerance during seedling stage. The effort is for developing reproductive stage cold-tolerant varieties for Haor areas, which is in progress at BRRI utilising modern breeding strategies.

North-western belt of Bangladesh is affected by heat, which is a problem in rice production in short duration T. Aman, upland Aus and late Boro season. Heat causes panicle deformation and spikelet sterility. Breeding for developing heat tolerant varieties is in advanced stage at BRRI. These are the major interventions by BRRI in respect to climate change adaptation in Bangladesh.

Declination of groundwater at 0.64 m/year is another challenge in the northern part of the country during Boro season. This is happening due to uneven rainfall, drying-up of river and use of excess underground water for crop cultivation. In order to combat this critical challenge, BRRI released a low input variety for that part named BRRI dhan 69, which can give significant yield with less input like fertiliser and irrigation.

Bangladesh has the potential to boost rice production and export, which can contribute to the national economy. Due to increased intensities of climate vulnerabilities, targeted breeding is essential to accommodate the diverse environments and the level of stress tolerance needs to be increased. The development and dissemination of stress-tolerant, high-yielding, early-maturing and nutrient-rich varieties will further boost rice production in the country. BRRI is using and utilising modern biotechnological tools like tissue culture, genetic engineering for developing diverse stress-tolerant varieties.