Rice: The Stepping Stone in the Rise of Bangladesh

Achieving self-reliance in rice production is in a sense synonymous with the Rise of Bangladesh.

Bangladesh is proud to have many success stories over the years, especially in achieving self-reliance in production of food, livestock and fishery in the country. Legends speak once up on a time when households in Bangladesh were abundant in rice, fish and cattle. However, being a small deltaic country of land scarcity, the rise of population, depletion of cultivable land, repeated natural calamities and series of famines led to decline in rice production. Bangladesh became a land of chronic food deficit. In 1971 with its Independence, it inherited a food deficit country. Achieving self-reliance in rice production is in a sense synonymous with the Rise of Bangladesh. As the staple food of the people, rice is synonymous with food security for the country. 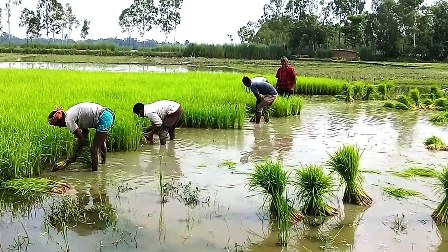 Historically, Bangladesh was never been food sufficient. It was always in chronic food shortage. Millions of people had died in famine and several millions had suffered from hunger and malnutrition. Even after Independence, the situation has not improved that much. Realising this critical scenario, Bangabandhu Sheikh Mujibur Rahman, the Father of the Nation, urged the agricultural graduates and scientists in 1973 at Bangladesh Agricultural University (BAU) to produce more rice to meet the requirement of country’s ever-increasing population, because he was unable to procure rice anywhere from the world despite his efforts. One of his priority policies was to make Bangladesh self-reliant in food production. This was the one-kind of direction or inspiration for rice scientists immediately after Independence to ensure food security. Inspired by his directives, the rice scientists of the country with their relentless efforts innovated various High Yielding Varieties of Rice (HYV).

In the mid-seventies the “Miracle rice” IR8 and revolutionary year-round rice variety BR3 had brought first breakthrough in the national food production. After Bangabandhu’s unfortunate assassination, the revolution was clogged for a long-time. In 1996 Bangabandhu’s worthy daughter Prime Minister Sheikh Hasina came into power with a landslide victory in the national parliamentary election and took all necessary steps to boost up production and made the country self-sufficient. And for the first time, the country achieved self-sufficiency in food, especially in rice.

PM Sheikh Hasina has awarded the prestigious Ceres Medal by the Food and Agriculture Organization (FAO) for this tremendous achievement.

Since Independence, population increased two and half-fold, but rice production has increased more than three and half-fold, which reflects the success story of rice scientists, extension agents and farmers with the strong support of pro-agriculture government led by Prime Minister Sheikh Hasina. Again in 2013, she made the country not only self-reliant in food, but also enabled it as a food surplus country also, and shown courage of exporting rice abroad. Bangladesh Rice Research Institute (BRRI) is a one of key contributors behind this remarkable achievement.

In 2015, BRRI has formulated Rice Vision for 2050 and beyond; estimating projected rice requirement for 2030, 2041 and 2050. The projected requirements are 36.5, 42.0 and 44.8 million tonnes, respectively, to meet the demand of 180, 203 and 215 million people. The production target to achieve these milestones is40, 44 and 48 million tonnes, respectively, having a surplus of about 3.0 MT per year. Using the high yielding new varieties and new technologies, the country got the momentum and already exceeded the production target. For example, during the last 10-year period(2009–19) rice production has increased at the rate of 0.6 MT year, and this year it will be even more than expected rate. 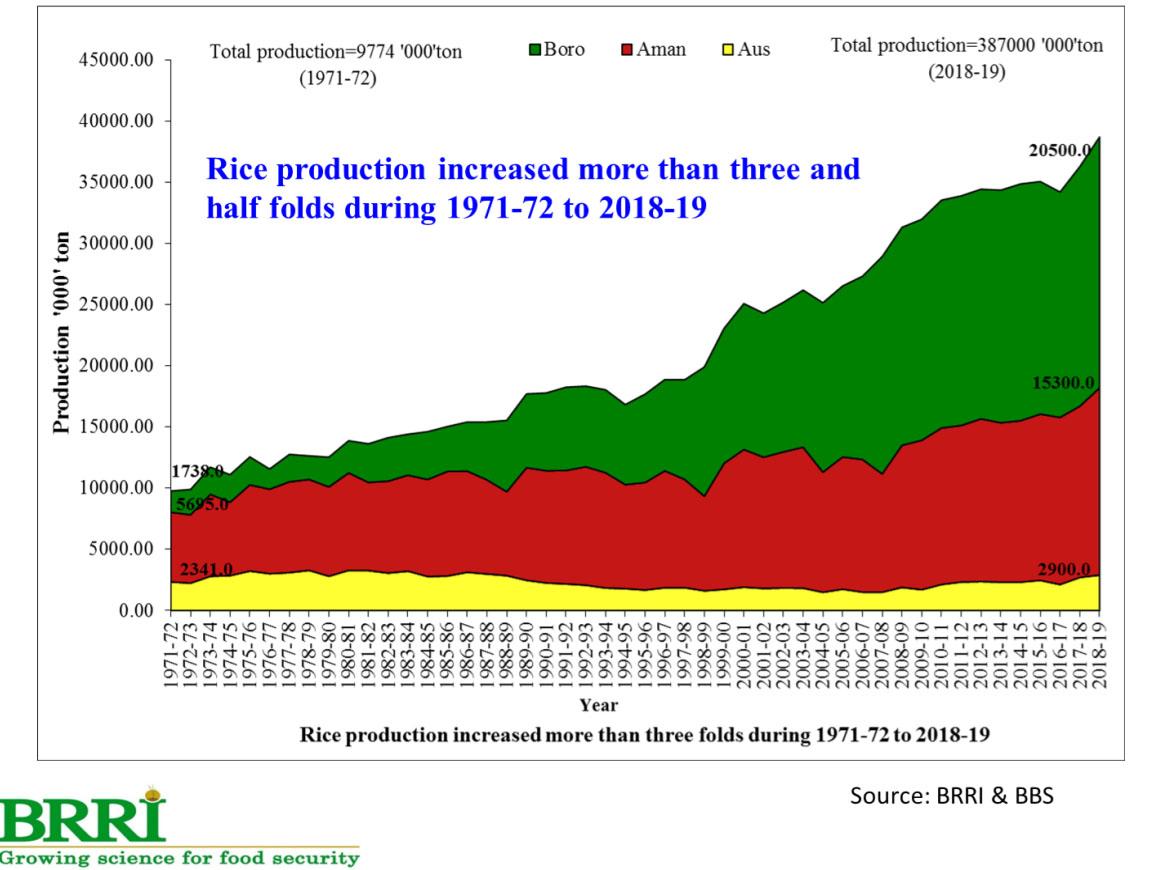 According to recent statistics of the United States Department of Agriculture (USDA), Bangladesh has had the highest average rice yield in South Asia and as per world standard. During 2019–20 production years, Bangladesh is going to clinch third place beating Indonesia in global rice production with an increased output of 38.54 million tonnes enabling surplus of 4.0 MT meeting requirements for 167.0 million people including 1.2 million Rohingya refugees. Bangladesh has emerged as a global model for combating hunger and obtained great success in becoming a country of food surplus from chronic food shortages. At the time of its Independence in 1971, it was beyond anyone’s imagination that a tiny piece of land in the South Asian region called Bangladesh will perform so remarkable that it will exceed several domestic as well international agencies’ targets on economic performance.

Initially, BRRI’s main target was to produce more rice in less land and feeding the ever-increasing population of the country. However, with the increase of per-capita income and socio-economic condition, demand and taste of the people have been changed. Now, they prefer slender and nutritious rice.

Moreover, Bangladesh will have to fulfil the Sustainable Development Goals (SDGs) by 2030, and one of the important goals of SDGs is doubling the productivity along with nutritious and safe food.

Also Read : • SDGS COVID-19 and Climate Anomaly: Turn Up the Heat on Emissions

BRRI has so far developed and released 102 modern varieties (95 Inbreed and 7 Hybrid) of them, and 24 are stress tolerant of which 10 are saline tolerant, 3 submergence, 3 drought, 4 cold, 2 tidal submergence, 1 semi-deep water and 1 dual tolerant (Sal+Sub). In addition, 13 premium quality, 5 Zn-enriched and 3 Low GI (Glycemic Index) rice for diabetic patients have been developed. It is reported that, more than 80 per cent of total rice area of the country has been covered by BRRI-released variety and its contribution to national rice production is about 91per cent.

It is known that rice is a major crop in Bangladesh, which provides 70 per cent calories and 65 per cent protein. Therefore, rice is not just only a food or commodity for Bangladeshis, but it is the daily necessities for the people. People used to say, rice is life in Bangladesh. If they failed to produce sufficient rice, millions of people would have been food refugees and crores of peoples may die. Moreover, Bangladesh has to spend most of its domestic income for importing food and feed. However, instead of struggling for food and poverty reduction, the country is now showing courage to take and implement million dollars projects from its national incomes. Among other key development indicators this has been visualised by the “South China Morning Post” in a piece titled – The Big Story: The Rise and Rise of Bangladesh. However, behind the entire success indicator the biggest secret was its persistent food security. Hence, behind the big story Bangladeshis want to say “Rice is Rise in Bangladesh”.