From Deep Sea to Skincare 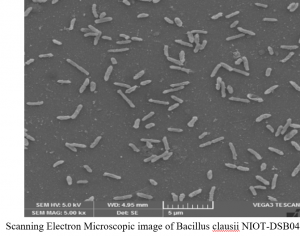 with Karnataka-based Cosmos Biotech LLP for the transfer of technology for the production of Ecotine, a key ingredient of skin care and sun protection products.

Ecotine is a protein molecule that naturally occurs in bacteria that are extremely or moderately halophilic or salt-solving. They serve as a protective substance in bacterial cells. They help protect the microorganisms from extreme environmental conditions like high salinity, pressure, heat or aridity stress, and UV-radiation.

A team of scientists from NIOT, Port Blair, identified a halophilic bacterium, Bacillus clausii NIOT-DSB04 while analysing sediment samples collected from deep sea (at a depth of 1,840 metres) near Barren Island in the Andaman and Nicobar region during a cruise conducted by the Ministry’s Ocean Research Vessel `Sagar Manjusha’. They found it had ecotine molecules. They further developed a recombinant DNA technology method to optimise its production.

Ectoine has applications in dermo-pharmacy and the medical field. In the dermopharmacy industry, ectoine and its derivatives are used as a major ingredient in moisturizers, UV protection creams, and as a freeze-stabilizing agent for enzymes. It accelerates the production of heat shock proteins by the skin and protects the skin cells from environmental effects such as dryness and UV radiation. Ectoine is mainly used in sun protection, moisture protection, and anti-aging creams.

In the medical field, it helps stabilize Langerhans’ cells of the skin, by preventing the entry of harmful microorganisms and allergens. It intensively assists the moisture retention of the skin by protecting the hydrolipid system. Further, it encourages the regeneration processes of the skin, maintains the vitality of the skin cells, supports the skin’s immune system, and protects the cell structures of the human skin and their genetic material.

The study team was led by Dr. L. Anburajan and Dr. B. Meena and included Dr. N. V. Vinithkumar, Dr. R. Kirubagaran and Dr. G. Dharani. They published a report on their work in Elsevier’s Microbial Pathogenesis journal.

The researchers noted, “So far, Ecotine has been imported. Now, with the development of our technology and its transfer for commercial production, it would be available to the domestic industry with greater ease”. (India Science Wire)