From Kyoto Protocol to Paris Agreement: A Transition in Question

With the postponement of COP 26, there lies a great challenge for achieving the Paris Agreement, SDGs, multilateralism and international cooperation. Huge transformation is the need of the hour for social and economic justice with greater promises for human beings.

The 11th Petersberg Climate Dialogue was held virtually in the wake of COVID-19 pandemic. Prakash Javadekar, Union Minister for Environment, Forest and Climate Change, Government of India, attended the session. Since 2010, Germany hosts the event to provide a platform for high level political discussion to negotiate on international climate and advance climate action. The session was co-hosted by the UK, as it will be chairing the next presidency of 26th Conference of Parties to United Nations Framework Convention on Climate Change. This summit holds a great significance as efforts are made on one hand to fight against coronavirus, and countries, on the other hand, plans to move towards implementing the Paris Agreement 2015 as the Phase 2 of Kyoto Protocol from 2013 to 2020 comes to an end.

India manifested its solidarity with world in combating the current COVID-19 crisis and stressed on formulating sustainable consumption patterns for sustainable lifestyles. It emphasised on how climate technology should be an open source so as to benefit the low income or developing countries. Amidst the pandemic, pandora box opened in the name of climate finance. The conundrum remains between the developing and developed countries. However, India suggested climate finance of 1 trillion USD in the form of grants for developing countries to cater the situation. Not only this, India exhibited its Nationally Determined Contributions of 10 years and its consonance with Paris Agreement for temperature control. It further emphasised to get cracking on renewable energy to maintain efficiency levels and strategy to set foot on net zero emissions by 2050.

Also Read : Covid 19 And Climate Anomaly Turn Up The Heat On Emissions

For the first time in history, there will be an exchange with non-state actors like private entities, non-government organisations (NGOs), trade unions, etc.

The European Union (EU) proclaimed its intention to raise its climate target for 2030.

Under the Paris Agreement, governments tend to do the same every fifth year, considering the technological advancements. However, the present devotion is insufficient to maintain the levels of global warming below 2 degrees Celsius. There has always been a deeper debate for differences in implementation and negotiation.

The virtual meeting appealed the nations to consider climate change as central to economic recovery. However, this entreaty seems to be faded from Germany’s end as it might turn its deaf ear. It along with four countries have not submitted its National Climate Plan, which was supposed to be submitted at the end of 2019, and thus, holding the new climate target. Before the meet, 68 companies appealed governments to be invited as participants of the same to provide impetus to their initiative Stifung 2 degrees for meeting climate targets. Such companies from all the sectors were allowed, however, there were no concrete details regarding the necessary climate target for 2030. 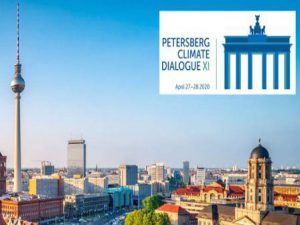 Way back in 1997, with COP 3 in Kyoto, Japan, the dawn of realisation hit the countries seeing the skyrocketing levels of global warming. A first of its kind binding treaty was signed in which signatories pledged to take emissions to its lowest level to prevent anthropogenic intervention with climate system. The terms of the treaty spell out that the US and the EU are bound to cut their emissions level by an average of 5 per cent by 2012. However, no such obligation was casted on developing countries owing their less contribution in building up of such carbon dioxide in the environment. The emissions of Russia dropped drastically before signing of the agreement. All the efforts of five long years in the protocol were in vain when the US and Canada did not ratify the treaty. The US President Bush claimed that ratification of the treaty would devastate the country’s economy. From a binding treaty, the need of hour, it got converted to a dead provision.

As Kyoto Protocol visualises its success, the defaults pull its step a back. Some feel that it yielded a mixed result on the ground that some of the reduction in global warming might be due to the ‘carbon leakage’, i.e., shifting of emissions to developing countries like China and not terminating completely. The Protocol failed to include fast-rising emissions from aviation or shipping. Also, many on first hand contended that the targets were far too self-effacing, and hence not able to slow down the global emissions. It failed to target the true problem, i.e., concentration of CO2 in air rather than emissions intrinsically, and didn’t set a long-term goal for atmospheric concentrations of CO2.

The fading of the Kyoto Protocol led to a rise in number of conferences and negotiations resulting in a fresh start in COP 21, which was held in Paris in 2015. Article 2 of the Paris Agreement adjure the members to limit the average temperature of the world to not more than 2 degree Celsius above pre-industrial levels, while endeavouring to keep this increment to 1.5 degree Celsius above pre-industrial levels. With this it egresses from Kyoto Protocol in the sense that it does not provide any mechanism to force a country to meet a specific target by a particular time. Rather it provides for US$ 100 billion fund to assist developing countries to adapt to greener technologies.

The gist lies on the stance that the countries should adopt 100 per cent clean energy with zero greenhouse gas emissions by 2080.

The ambitious plan of the 21st century seems to be haywire when the history repeated itself and once again the US decided to withdraw itself from the initiative. President Donald Trump asserted for renegotiation, however, its allies, i.e., Germany, France and Italy, refused to do the same by calling it ‘irreversible’. Moreover, its disadvantages like different rules for different countries, impact on employment opportunities, etc. may counter the initiative. Also, countries are unaware as to how much carbon needs to be cut down for effective results and the emission gap after 2030 seems massive. It involves huge cost of US$ 100 billion per day by 2020 and many critique that it must raise around US$ 450 billion annually to impact the global change. It would further lead to rise in price of energy and directly or indirectly affect the average consumers. Moreover, the reported information on such emission reduction may not be verified. When there is so much in queue for everyone, the undefined boundaries generally negate the benefits that could have been achieved with reduction of such benefits. However, it looks forward with a greater leap since it would create employment opportunities and encourages investing in renewable energy. The agreement is supported by majority of people since no one can alone tackle the situation as agreement recognises the fact that there is no safe level of warming. All the more, it allows the developing countries to divert from fossil fuel economy to cleaner fuels. The innovations may lead to competitions thereby heading to improvements in emission levels.

With the postponement of COP 26, there lies a great challenge for achieving the Paris Agreement, Sustainable Development Goals, multilateralism and international cooperation. Although many initiatives have been taken, global emissions continue to rise over the past 10 years. Huge transformation is the need of the hour for social and economic justice with greater promises for human beings. ‘Now’ is the time when implementation and cooperation take a front seat and negotiation, a back seat. With the launch of this dialogue, we have entered a phase to ‘fulfill the promises of Paris’ because actions speak louder than words.