Study by NCCR scientists showing how climate driven upwelling could affect the marine ecosystem and fisheries due to Harmful Algal Blooms.

The Earth is warming up rapidly due to climate change which is altering the ecosystems both on land and at sea which we depend on for our food source. In a study conducted by NCCR scientists, it was examined how climate driven upwelling could affect the marine ecosystem and fisheries due to Harmful Algal Blooms (HABs). There are some species of algae that can have negative impacts on marine environments. 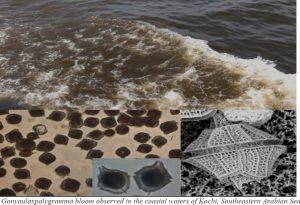 Most of the heat that is added to the oceans due to climate warming results in the warming of oceans mainly in the near-surface zone.Such warmer water temperature in the summer monsoon and excessive nutrients from fertilizers or sewage brought by runoff, trigger the development of certain types of harmful algae bloom events making the oceans less productive. NCCR scientists are of the opinion that the incidents of HABs increase may result in a major reduction of marine food sources for millions of people while this would also have far reaching impact on the coastal economy. They reported about a red tide of toxic algae (Gonyaulaxpolygramma) that bloomed along the southeastern Arabian Sea.

Such blooms can not only affect local and regional economies, but also can have a far reaching impact onthe global economy.

NCCR scientists tried to find out the influence of monsoonal upwelling on the phytoplankton community structure and related environmental variables in the coastal waters of Kochi, the Southeastern Arabian Sea. As HABs have a significant impact on the socio-economic systems and human health, reducing nutrient loads can help to prevent the development of HABs. NCCR scientists emphasized the need for a continuous monitoring program for HABs which would be useful to develop strategies to control the ecosystem and economic losses caused by the undesirable algalblooms.

The NCCR study revealed an increased nutrient concentration of phosphates and nitrates in the coastal waters which most likely triggered the bloom of harmful algae like G. polygramma, threatening fish stocks such as sardines.

Coastal algal blooms are a natural phenomenon; but since the 1950s, their frequency, duration, and geographic scope have increased due to human-induced climate change. The HABs are often aresult of land-based pollution commonly associated with excessive amounts of nitrates, phosphates and othernutrients entering an aquatic ecosystem via discharges from sewage treatment plants and septic tanks and storm water runoff from fertilized croplands or emissions from livestock or human wastewater.NCCR scientistssuggest that long term nutrient management strategy needs to be developed, which would help to reduce nutrientsdraining away into the natural environment to minimize economic losses caused by the HABs.