Decentralisation and deregulation of the economy, re-imagining the economic approaches, promoting small-scale industries, etc. help generate employment and utilisation of the workforce in the market.

COVID-19 pandemic has amplified the challenges to the youth with regard to their employment opportunities. The policy steps taken by the government have resulted in slowdown of the economic activities, which has led to mass unemployment, and even loss of jobs in some cases. 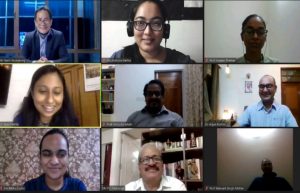 According to the International Labour Organisation (ILO) report titled “COVID-19 and the World of Work” (4th edn.) published on 27 May 2020, around 94 per cent of the world’s workers are living in countries with some sort of workplace closure measures in place. There is an urgent demand for comprehensive policies that protect the youth and create new employment opportunities.

In India, the major concern for the community at the large is the growing population with highest number of youth population, which is 28 per cent of the total population of the country. Youth population of the country is considered as the “Demographic Dividend”, which implies that if the available youth of the country is equipped with quality education and skilled training, they will be able to seek decent and relevant jobs according to their skills and training. The ultimate result of this approach leads to the economic development of the nation. However, there is the growing debate of ‘Disaster and Dividend’, where the youth of the country are very anxious about their jobs.

“Demographic Dividend” is a technical term, which implies the demographic transition and it is a slow process that gradually happens in the economy of every country, said P C Mohanan, Former Acting Chairperson, National Statistical Commission, Government of India, who chaired the panel discussion “Harnessing the Demographic Dividend amidst the COVID-19 Pandemic in India: The Way Forward for Youth Employment and Opportunities”. The discussion was organised by the Centre for Work and Welfare, Impact and Policy Research Institute (IMPRI), New Delhi.

He shared that the median age of the population is 28 years in India, while it is 48.6 years in Japan and 42 years in China. The numerical data clearly show the demographic advantage in favour of India.

He raised the question that how we can utilise this demographic advantage and convert it into demographic dividend? This is possible when the youthful workforce of the country become employable. While stating the data about the employability, he said, it is unfortunate that we have highest number of unemployment rate, i.e., 15 to 29 percent. The unemployment challenges in front of nation affect the demographic advantage. Further, Mohanan added that the current pandemic challenge has become a major hurdle in employment and economic activities of the nation.

Dr Simi Mehta, CEO and Editorial Director, IMPRI, shared that demographic dividend is a benefit a country gets when its working population outgrows its dependents such as children and old people. She explained the stages involved in the demographic dividend, which includes a) Improved income and health reduces the infant mortality and a baby boom arises; b) the baby boomers, once regarded as the population curse, grow up to create an unprecedentedly large army of income-earners thereby the boosting the GDP; and c) demographic dividend starts disappearing. While explaining this stage, Dr Simi gave the examples of Japan, Germany, Russia, Italy, etc., where people began to retire, and the proportion of non–earners rose rapidly.

Dr Arjun Kumar, Director IMPRI, China-India Visiting Scholars Fellow, Ashoka University, stated that in case of Asia – North, West, Central and South East, there are difference in the median age of the population. Transition happens largely because of a decrease in the Total Fertility Rate (TFR). The subcontinent’s countries, including India, have the advantage to take benefit from this demographic transition. There is a need to utilise this demographic transition wisely and diligently. Dr Arjun added we have two-third of the population as working age population and from this we have only one-third who gets employment. He highlighted the problem of unemployment and under-employment. He also shared that according to various survey reports, educated women in society do not participate in the employment process and market. Moreover, most of the youth who are educated are not employable because of lack of skill and training.

Prof Balwant Singh Mehta, Research Director, IMPRI, and Senior Fellow, Institute for Human Development (IHD), Delhi, focused on the “Demographic Dividend: Demography and Youth in India. He said it is wrong to make an assumption that demographic dividend in India is same. It is different from state to state and depends upon the various government policies and its impact. He stated that by 2030, India will be the most populous country with 1.46 billion people surpassing China’s projected population of 1.39 billion. Prof Mehta shared the data relating to the median age in India which would be 32 years in 2030, which is much younger than in the US (39), UK(42), China(43) and Brazil (35). He shared the comparative data of Indian states relating to the demographic dividend. Youths in India belong to the age group of 15–29 years, and the half of them has less than secondary education or illiterate and only 13 per cent are graduate. Prof Mehta stated only 5.5 million additional jobs had been created in the country during 2017–18 against 8 million youth, which entered the job market. India is facing the huge unemployment problem with 6.1 per cent overall unemployment, which is highest in 45 years. 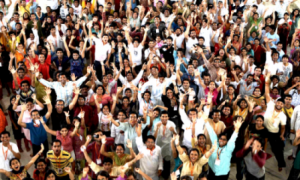 Toshi Wungtung Member of Legislative Assembly, Shamator Constituency, Nagaland, shared that though the number of corona virus cases in the Nagaland is low, the COVID-19 has made considerable effect on the nature of economic activities of the Nagaland. The sudden shut down of industries, factories and other departmental activities has affected the people of Nagaland hugely. Toshi shared further that as per the data70 per cent of the construction workers left the state due to COVID-19, and the shutdown of the transport hugely cost the transport department and tourism sector. He added that there is need of a serious comprehensive step by both government and the members of the civil society in the pandemic times. This will help to revive the economic and ensure the employment to the people of state and migrants.

Prof Vinoj Abraham, Centre for Development Studies (CDS), Thiruvananthapuram, Kerala, stated that demographic dividend is not automatically perceived, and it is attached with the demographic transition. Firstly, demographic transition of an economy is closely linked with the structural transition of an economy. For instance, there is always a shift from agricultural to service to secondary sector. This is the part of structural transition in European counties. But in India, we had demographic transition, not structural transition. Secondly, without addressing the female workforce participation rate we cannot show the true picture of demographic dividend. Women’s participation is the core of the demographic dividend. Cultural norm is the factor that leads to the low participation of the female in market. Thirdly, the large workforce in the market is highly unskilled or lack of proper training. This creates the challenge of high unemployment rate in the country. Lastly, the challenges created by the COVID-19 pandemic for the youth have resulted in mass unemployment, layoff, etc. Prof Vinoj suggested that for generating employment and for utilisation of the workforce in the market, decentralisation and deregulation of the economy, re-imagining the economic approaches, promoting small-scale industries, etc. are required.

She quoted the newspaper reports where the PhD scholars applied for peon and clerk positions in the government departments.

She stated that lack of skills and course curriculum which do not support the market demand and supply lead to the unemployment, especially among the youth of the country at a large scale. Prof Anjana emphasised upon the accounts of women stories during the corona pandemic. While the urban women lost their jobs, the household chores of women in the rural regions increased. She stated the data that around the 27 billion lost their jobs. Prof Anjana suggested that guaranteed employment under the government schemes to the poor sections of society, redesigning the economy sector, etc. are required for generating decent jobs.

Ritika Gupta, Senior Research Assistant, IMPRI, in her presentation shared “Work Life of the Youth in the Times of COVID-19: Perplexed State of Mind, Especially for Youth Indian Women”published in Journal of Development Policy Review (JDPR), IMPRI. She stated the challenges faced by the youth, which include lack of knowledge on where and how to look for the jobs, outdated skills that do not address the labour demands, and education and job mismatch. Gupta discussed the sectoral composition and said that there is gradual shift from the agricultural sector and manufacturing sector to non-manufacturing sector and service sector. Moreover, she also presented the social and psychological facets of unemployment faced by the youths in India.

Anshula Mehta, Senior Research Assistant, IMPRI, focused on the opportunities for the youth available in the private sector and government schemes such as Atma Nirbar (self-reliant), assured employment schemes, expansion of apprenticeship and training and curriculum as per industry. There is demand for need and support to the youth in securing the employment.