The miniproteins can bind to and block the spike (S) protein of the SARS-CoV-2, which helps it enter and infect human cells.

The COVID-19 pandemic has entered its third year. Scientists and experts worldwide have toiled to 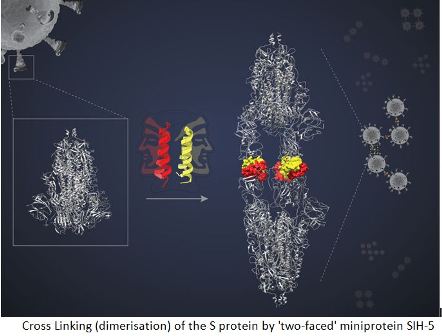 discover the best possible measures to prevent the pandemic from spreading its tentacles further. Their collective efforts have led to the discovery of vaccines protecting against SARS-CoV-2.

However, the emergence of new virus strains is challenging to the protective effect of COVID-19 vaccines. This has necessitated alternate means to help fight the virus so it cannot spread further. The researchers at the Indian Institute of Science (IISc), Bengaluru, have developed a new class of artificial peptides (small chains of amino acids which combine to form protein) or miniproteins that can render the COVID-19 virus inactive. The details of the research have been published in the journal NatureChemicalBiology.

‘Protein-protein interaction is more like that of a lock and a key. The interaction can be hampered by a lab-made miniprotein that acts, fights with, and stops the key from binding to the ‘lock’, and vice versa,’ the researchers noted.

The artificial peptides or miniproteins can block not only the entry of viruses like SARS-CoV-2 into human cells but also have the potential to clump virions (virus particles) together, reducing their capacity to infect.

‘To examine the effectiveness of one of the miniproteins, called SIH-5 (SARS Inhibitory Hairpin- 5) in preventing the COVID-19 infection, the research team also tested it for toxicity in mammalian cells. It was found to be safe’, says Dr. Jayanta Chatterjee, Principal Investigator and Associate Professor at the Molecular Biology Unit (MBU), IISc, and the study’s primary author.

Next, SIH-5 was administered to the hamsters in the laboratory of Raghavan Vardarajan, a Professor at the Molecular Biology Unit (MBU). The hamsters were then exposed to the SARS-CoV-2. It was found that the hamsters showed no weight loss and had significantly decreased viral load with much less cell damage in the lungs compared to hamsters exposed only to the virus and getting no dose of the miniprotein.

The miniproteins can bind to and block the spike (S) protein of the SARS-CoV-2, which helps it enter and infect human cells. The binding was further characterised extensively by cryo-electron microscopy (cryo-EM), carried out in the laboratory of Somnath Dutta, an Assistant Professor at MBU and one of the study’s corresponding authors.

On the outcome of the methodology followed by his team, Dr. Chatterjee says, “Through this methodology, we identified the role of the helix-hairpin molecule (miniprotein) in inhibiting the SARS-CoV-2 virus entry into human cells.”

What, after all, is the mechanism by which miniproteins act in preventing viral infection? Chatterjeeexplained that miniproteins, helical, hair-pinned peptides, can pair up with another of its kind, forming a dimer with two faces to interact with two target molecules. The spike (S) protein of the SARS-Cov-2 virus binds to the ACE-2 (Angiotensin-Converting Enzyme-2) protein in the human cell to enter these cells. Each S protein is a complex of three identical peptides, forming an S protein trimer. Each polypeptide has a Receptor Binding Domain (RBD) that binds with the ACE-2 receptor on the host cell surface. This interaction facilitates viral entry into the cells. Now, when aSIH-5 dimer encounters an S protein, one of its faces binds tightly to one of the RBDs of the S protein trimer while the other face binds to an RBD from a different S protein.

This ‘cross linking’ allows the miniprotein to block both S proteins simultaneously. “In this way, the dimeric helix-hairpin molecule (miniprotein) can bind to its target and hold it tight to form a sandwich complex. This prevents the target (virus) from getting loose and engaging in its native biological role,” Dr. Chatterjee explains.

Highlighting the significance and effectiveness of cross-linking in blocking the action of S protein, JayantaChatterjee says- “Several monomers can block their target. {But} cross-linking, also called dimerisation, of S proteins block their action many times more effectively. This is called the avidity effect.”

Under cyro-EM, the S protein targeted by miniproteins appeared to be attached head-to-head. “We expected to see a complex of one spike trimer with SIH-5 peptide. But I saw much more elongated structure,” says Dr. Dutta.

The miniprotein was found to be thermostable by the researchers. This means that it can be stored at room temperature without deteriorating. This property can be a fitting candidate for inhibiting the Covid-19 infection from spreading further.

What are the further recommendations emerging out of this study?

“The therapeutic efficacy of SIH-5 in hamsters demonstrates its promise in evolving into a normal class of therapeutics against diseases like Covid-19 that require inhibition of protein-protein interaction to stall the disease progression, ”explains Dr. Chatterjee.

Although their study focused on inhibiting the SARS-CoV-2, the researchers believe that with minor manipulation and peptide engineering, this lab-made helix-hairpin miniprotein could also inhibit other protein-protein interactions.