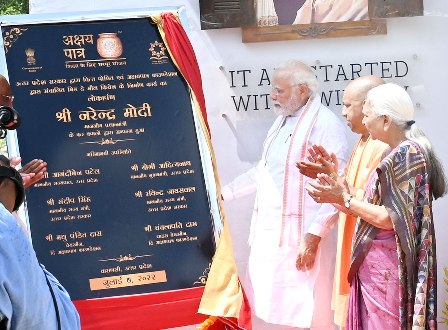 At the outset, the Prime Minister thanked the people of Uttar Pradesh and Kashi for their massive support in the recent elections.

The Prime Minister said that Kashi has always been alive and in constant flux. Kashi has shown a picture of the whole country’s heritage and development. The Prime Minister said that schemes and projects of thousands of crores rupees had been completed, and many are going on. He said the soul of Kashi is internal. However, relentless improvement in Kashi is going on. He remarked that the development is making Kashi more mobile, progressive and sensitive. “My Kashi is a great example of Sabka Saath, Sabka Vikas, Sabka Vishwas aur Sabka Prayas”, he said.

The Prime Minister, MP from Kashi, commented, “I am happy to see how the aware citizens of Kashi have done the work to give direction to the country. The citizens of Kashi have told the entire country that short-cuts cannot benefit the country.” He praised the locals for preferring long-lasting solutions and projects over temporary and short-cut solutions. He said improvements in infrastructure and other spheres have brought tourism to the city and created new opportunities for business and ease of living.

Talking about the upcoming Sawan month, the Prime Minister said devotees of Baba Vishwanath from all over the country and the world would come to Kashi in large numbers. This, he remarked, will be the first Sawan festival after the completion of the Vishwanath Dham project. PM said people have experienced in the past months how much enthusiasm there is in the world about Vishwanath Dham. He said the government is moving ahead to make the experience of devotees as rich and easy as possible. Various Yatras of faith is being made easy and convenient.

“For us, development doesn’t just mean glitter. For us, development means empowering the poor, oppressed, deprived, backward, tribal, mothers and sisters”, the Prime Minister said. He said the government is working continuously on providing pucca houses and piped water to every household.

The Prime Minister said our government has always tried to solve the poor’s problems and support them in their happiness and sorrow. From the free corona vaccine to the provision of free rations to the poor, the government has not left any opportunity to serve the people. Digital India, Ayushman Bharat, increasing medical infrastructure is creating new opportunities for the people. The Prime Minister remarked that, on the one hand, we are expanding the facilities for CNG-run vehicles to make the country’s cities smoke-free. On the other hand, we are also giving the option of connecting diesel and petrol-powered boats of our sailors with CNG and taking care of Ganga ji.

The Prime Minister also noted the enthusiasm of sportspersons for getting a new sports centre. The Prime Minister said that the government is working on making all facilities for Olympics sports available in Kashi. He said international facilities are being created in the redeveloped stadium at Sigra. This six decades-old stadium will be equipped with the facilities of the 21st century.

The Prime Minister asked the people of Kashi to keep Ganga and Varanasi clean and expressed the confidence that with the support of the people and blessings of Baba Vishwanath, we will fulfil all pledges for the city.

In the last eight years, the Prime Minister has focused a lot on infrastructure development in Varanasi. This has resulted in the transformation of the landscape of the city. The primary focus of this endeavour has been enhancing the ease of living for the people. Taking another step in this direction, the Prime Minister inaugurated projects worth over Rs 590 crores during the programme. Among these are Multiple initiatives under Varanasi Smart City and Urban Projects, including the re-development of Namo Ghat in Phase-I and the construction of a bathing jetty. Conversion of diesel and petrol engines of 500 boats into CNG. Re-development of Kameshwar Mahadev ward of Old Kashi and over 600 EWS flats constructed in village Harhua, Dasepur. New Vending Zone and urban place prepared under Lahartara-Chowka Ghat Flyover. Tourist facility and market complex at Dashashwamedh Ghat. 33/11 KV Substation at Nagwa under IPDS Work Phase-3.

During the programme, the Prime Minister also laid the foundation stone for projects worth more than Rs 1200 crores. Among these are multiple road infrastructure projects, including a six-lane widening of the road from Lahartara – BHU to Vijaya Cinema; a four-lane widening of the road from Pandeypur Flyover to Ring Road; Four lanes of the highway from Kuchaheri to Sandaha; a widening and strengthening of Varanasi Bhadohi Rural Road; construction of five new Roads and four CC roads in Varanasi rural area; construction of ROB near Babatpur railway station on Babatpur-Chaubeypur road. These projects will significantly help reduce the traffic load on city and rural roads.

To give a fillip to tourism in the region, Prime Minister laid the foundation stone of multiple projects, including the development work of the Sarnath Buddhist Circuit under the World Bank-aided UP Pro-Poor tourism development project, construction of Paavan Path for Asht Vinakaya, Dwadash Jyotirling Yatra, Asht Bhairaw, Nav Gauri Yatra, Tourism Development work of five stoppages in Panchkosi Parikrama Yatra Marg and Tourism development various wards in Old Kashi.

The Prime Minister also laid the foundation of Phase 1 of re-development works of the Sports Stadium at Sigra.