IUCN has six Commissions made up of over ten thousand experts that inform its knowledge base and help produce its work.

Punjabi University, Patiala, has added a feather to its cap with Dr Himender Bharti, Head of its 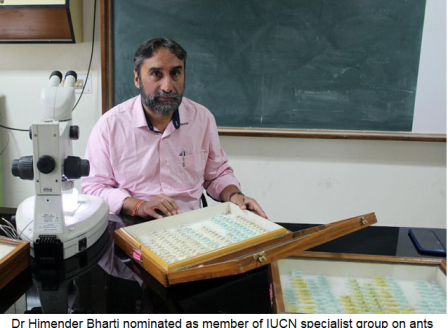 Department of Zoology and Environmental Sciences, nominated as a member of the recently constituted specialist group of International Union for Conservation of Nature (IUCN) on ants.

As an Internationally recognised ant researcher, Dr. Bharti along with other leading scientists from Brazil, the USA, Australia, South Africa, UK will focus on the conservation of ant species, and their role in global ecosystems.

IUCN has six Commissions made up of over ten thousand experts that inform its knowledge base and help produce its work. One of them is Species Survival Commission (SSC). It is a science-based network of more than 10,500 volunteer experts from different parts of the world.

They work in specialist groups, red list authorities, conservation committees, and task forces. Some of the specialist groups address conservation issues related to groups of plants, fungi, or animals while others focus on broader issues such as the reintroduction of species into former habitats, climate change, wildlife health, and sustainable use and trade.

The specialist group on ants assumes importance as ants act as central players in many ecosystems and their species composition signals ecosystem health and functioning. Ants are everywhere but are noticed only occasionally. They run much of the terrestrial world as the premier soil turners, channelers of energy, dominatrices of the insect fauna. They represent the culmination of insect evolution, in the same sense that human beings represent the summit of vertebrate evolution.

Amid growing concern about biodiversity loss, some ant species and communities are also at risk of disappearing. Some even appear on the IUCN Red List. At the same time, some other invasive species  contribute to the extinction of other creatures. Improved understanding of ants, how to identify them, where they live, what they do is, therefore, a vital task in sustainably developing our world.

and President of International network for the study of Asian ants (ANeT). His prime area of interest is evolutionary biology. He is actively engaged in systematics, natural history, molecular phylogeny, and the chemical ecology of ants. He is building up a reference collection of Indian ants.  (India Science Wire)