Ordinary antimicrobial fabric products available in the market inhibit microbes in 24 hours with an unsatisfactory efficiency. 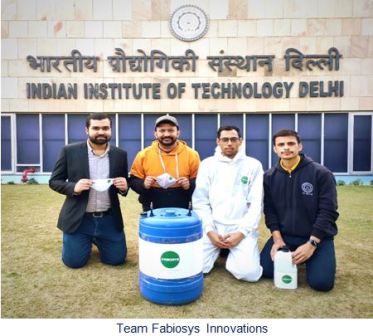 startup incubated at IIT Delhi, has developed an affordable high-performance medical textile called Fabium, which destroys more than 99% of bacteria and viruses within 30 minutes.

Fabium is developed using Hi-PAT technology, which makes it highly effective against bacteria, viruses, and fungi. Fabium starts working within seconds of contact with the pathogens and destroys them within 30 minutes.

Large-scale manufacturing of Fabium requires passing the raw cotton fabric through a set of proprietary chemical formulations while using the standard textile processing machinery, which is commonly available in the Indian textile industry.

The team has successfully completed large-scale manufacturing trials in collaboration with textile industry partners in the Delhi-NCR region to ensure that large-scale fabric manufacturing can be done while maintaining its high efficiency and affordability.

Fabium can be made with any kind of fabric – Natural or Synthetic; Woven, Non-woven, or knitted. One of the major USPs of Fabium is its natural colour, which is 100% white, making it suitable for further dyeing, printing, embroidery, and other kinds of designing.

“The affordability of Fabium is due to its technology rather than cheap labour cost. Market research was done by the team fabio syndicates that cost-effective novel chemical formulation and unique textile processing technology makeFabiumcomparatively extremely affordable antiviral fabric. We are receiving encouraging responses from the industry for manufacturing & distribution of Fabium products,” said Yatee Gupta, Founder, Fabiosys Innovations.

The fabric is free from formaldehyde & metal nanoparticles, which cause toxicity & irritation to the human body. The material is rigorously tested as per ASTM D737 Standard for air permeability, which shows that the Fabium is almost as breathable as regular fabrics, making it very useful in applications like masks & Coveralls (PPE), where breathability is almost always an issue. (India Science Wire)