Antarctica, the southernmost continent with a geographical area of 14 million square km, has no indigenous population. 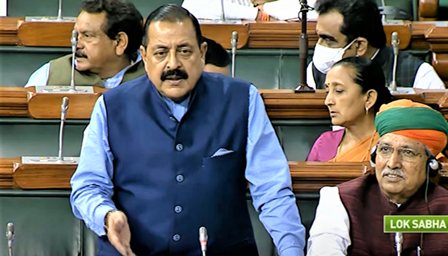 Charge) Earth Sciences; Minister of State PMO, Personnel, Public Grievances, Pensions, Atomic Energy and Space, Dr Jitendra Singh on Friday introduced a Bill in Parliament to provide for national measures for protecting the environment of Antarctic and dependent and associated ecosystem and to give effect to the Antarctic Treaty, the Convention on the Conservation of Antarctic Marine Living Resources and Protocol on the Environmental Protection to the Antarctic Treaty.

Antarctica, the southernmost continent with a geographical area of 14 million square km, has no indigenous population. However, around 1000 – 5000 people reside there in about 40 research stations spread across the continent throughout the year. In 1959, 12 Countries — Argentina, Australia, Belgium, Chile, France, Japan, New Zealand, Norway, South Africa, USSR, UK, and the USA signed the ‘Antarctic Treaty’ intending to prevent any militarisation of the continent and to establish it as a zone used only for peaceful research activities.

Down the line, more countries, including India, have signed the treaty. Currently, 54 nations have signed it. As a follow up to the treaty, a Convention on the Conservation of Antarctic Marine Living Resources (CCAMLR) was signed at Canberra in 1980, inter alia, for the protection and preservation of the Antarctic environment and, in particular, for the preservation and conservation of marine living resources in Antarctica, and a Protocol on Environmental Protection to the Antarctic Treaty was signed in1991, which designates Antarctica as a “natural reserve, devoted to peace and science”.

India has two active research stations; Maitri (commissioned in 1989) at Schirmacher Hills, and Bharati (commissioned in 2012) at Larsemann Hills in Antarctica and has successfully launched 41 annual scientific expeditions to it so far. With Himadri stations in Ny-Alesund, Svalbard, and the Arctic, India now belongs to an elite group of nations with multiple research stations within the polar regions.

The continuing and growing presence of Indian scientists in Antarctica in the research stations with a concurrent commitment to Antarctic studies and protection of the fragile Antarctic ecosystem warrants the adoption of domestic legislation on Antarctica consistent with its obligations as a member of the Antarctic Treaty System. The enforcement of such laws will confer jurisdiction on the courts of India to deal with any dispute or crimes committed in parts of Antarctica. Legislation of such a kind will bind the citizens to the policies of the antarctic treaty system. This will also be useful in building credibility and enhancing the country’s status globally.

The Protocol on Environmental Protection to Antarctica Treaty requires that each State Party take appropriate measures within its competence, including the adoption of laws and regulations, administrative actions, and enforcement measures, to ensure compliance with this Protocol.

The new bill introduced on Friday and titled Indian Antarctic Bill, 2022 fulfils that requirement. It, among other things, provides for the establishment of a committee on Antarctic Governance and Environmental Protection to monitor, implement and ensure compliance with the relevant international laws, emission standards, and rules for the protection of the Antarctic environment by the Operators or by any other persons engaged in programmes and activities in Antarctica.

The panel will be headed by the Secretary of the Ministry of Earth Sciences, as ex officio Chairperson, and have ten members representing the various ministries, departments, and organisations of the Central Government and two experts from the fields of the Antarctic environment or other relevant areas as members.

The proposed legislation will aim to provide a harmonious policy and regulatory framework for India’s Antarctic activities through a well-established legal mechanism, help in efficient and effective operations of the Indian Antarctic programme; and facilitate India’s interest and pro-active involvement in the management of growing Antarctic tourism and sustainable development of fisheries resources in Antarctic waters.