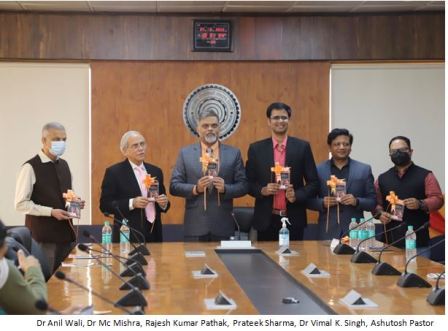 wearable air purifier Naso95, which is at par effective to an N95 grade face mask. It is helpful in combat of air pollution, allergens, bacteria, and viruses.

Naso95 is an N95 grade nasal filter. It sticks to the user’s nasal orifice and prevents bacteria, viral infection, pollen, and air pollution. A person using Naso95 is more protected than a generic facemask or a loosely fitted face mask. This would give users higher protection than a facemask even during the pandemic times, said Prateek Sharma, Managing Director, Nanoclean (Nasofilters).

In the past two years of the pandemic, it is commonly observed that the facemask is pulled down the nose knowingly or unknowingly. The nose is the primary organ in the human body for getting infected as it has proteins like ACE2, TMPRSS2 etc. So protecting the nose is non-negotiable. Unlike a facemask, Naso95 doesn’t compromise your comfort levels and conveniently solves this global problem. And even a 5-year-old can use it.

The product has been tested and certified by national and international labs for its safety and efficiency. This wearable air purifier comes in different sizes i.e. Small, Medium, Large and Kids size. Every 6thchild in India has asthma or some respiratory disease because of not fully developed lungs. This product can be used by kids who are more prone to air-borne infections and air pollution, and that too without discomfort, say researchers.

The launch ceremony at IIT Delhi observed a gathering from doctors and Government officials. Rajesh Kumar Pathak, IP & TAFS cadre, Secretary Technology Development Board (TDB), Government of India, appreciated the startup’s work and used the Naso95. He found it convenient to use and comfortable. Pathak mentioned that the product can greatly benefit society and should be used by all age groups. Also, the TDB would like to support the startup to take the product to the masses.

Dr MC Mishra, Former Director AIIMS, Delhi, believed that air pollution is a much bigger problem than viruses. Lung cancer remains the leading form of cancer and a product like Naso95 can effectively address the issue of respiratory illnesses in metro cities.

During the pandemic, the product can especially come in handy at places where one has to pull down for identification, e.g. airports, security checks etc.