India is Committed to Repatriating All Indians from Ukraine

Indian citizens from Ukraine have been brought back to India, by the seventh evacuation flight as part of 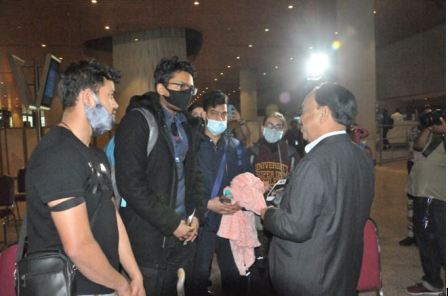 The Minister said the government is committed to repatriating all Indians from Ukraine. He assured the students that their friends and colleagues in Ukraine will also be evacuated soon.

Interacting with the media, the Union Minister said that having returned from the war-torn zone, the students were feeling nervous and worried and that he assured them that they are now safe. He said that all assistance needed for them to reach home will be provided by respective states.

Touching the motherland and meeting with families, students expressed gratitude towards the government.  Various state governments set up a helpdesk at Mumbai Airport to facilitate the students.

Air India Express flight had taken off from the Henri Coanda International Airport, Bucharest at 11.10 p.m. (IST) on Monday and reached Mumbai at 7.05 a.m. today morning after a brief stopover in Kuwait for refuelling. This was the 7th flight operated under the “Operation Ganga” evacuation mission.