India as a nation has to undertake and act to protect, restore, and promote sustainable use of terrestrial ecosystems; to sustainably manage forests; to combat desertification; to halt, and reverse land degradation and to halt loss of biodiversity.

The need of the hour is for the government to realize the importance of sustainable wildlife infrastructures in India. The current problems of desertification, land degradation, and biodiversity loss in our nation are the 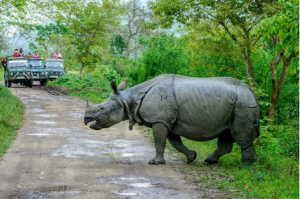 outcomes of the LPG (Liberalization, Privatization, and Globalization) model of growth launched under the New Economic Policy (NEP) during the leadership of P. V. Narasimha Rao in 1991.

With the increasing demand for various infrastructural projects across the nation, the demand for land area has also risen. This, in turn, has led to the decrease in the country’s green cover, thus resulting in human-wildlife conflicts across the nation along with a loss of biodiversity due to the increasing instances of wildlife accidents, and road-kills. While much of the fauna is considered sacred by the Hindu religion, the nation has inadequate structures that prevent the wildlife from road-kills and train collisions.

Ironically enough, the official mascot of the Indian Railways, Bholu, is an Asian elephant, which is the most highly affected species in train-wildlife accidents / collisions. On the road, the leopard is the worst affected species from road-kills. Both are listed under the IUCN’s Red List. The Asian Elephant is listed as endangered and the leopard is listed as vulnerable.

A report published by the Wildlife Protection Society of India in 2018 shows the extent of the damage done to biodiversity by such collisions, which also lead to damage of transportations and can prove fatal for human beings. It is not just the Asian elephant and the leopard, but many other species that get killed by such collisions. Every living organism has a role in the ecological cycle. Absence of one can break the entire cycle.

India does have an acute shortage of sustainable wildlife infrastructures. Excluding the already existing canopy bridge at the Anamalai Tiger Reserve, the Eco-Bridge across the Ramnagar Forest Division, and the Animal Underpass below the highway at Pench Tiger Reserve, there is only one project under construction, i.e., the Delhi-Mumbai Greenfield Expressway with five animal overpasses/bridges.

Even though India is following in the footsteps of Netherlands in constructing sustainable wildlife infrastructures, there are various limitations. The most important factor to consider is the geography of the nation which considerably varies from North to South and from East to West. Also, to consider is the remote location of some of the hotspots of such collisions.

India is in dire need of sustainable wildlife infrastructures. Even after seeing the effectiveness of the already existing three wildlife structures, there is less prompt action from the Government’s side to reduce road-kills, and wildlife accidents.

This is at odds with Goal 15 of the Sustainable Development Goals (SDGs), which discusses in detail the importance of life on land.

To achieve Goal 15 of the SDGs, the nation needs to understand the need for Sustainable Wildlife Infrastructures. The term ‘Sustainable Wildlife Infrastructures’ includes the construction of ‘overpasses, green bridges, eco-ducts, green roofs, culverts, wildlife viaducts, amphibian, or small mammal tunnels, etc‘. India as a nation has to undertake and act to protect, restore, and promote sustainable use of terrestrial ecosystems; to sustainably manage forests; to combat desertification; to halt, and reverse land degradation and to halt loss of biodiversity.

Emphasizing the need for sustainable wildlife infrastructures and the need to achieve Goal 15 of the SDGs, Siddhanta Das, Director General (Forest), and Special Secretary, Ministry of Environment, Forests, and Climate Change (MoEFCC) said,  “it is now compulsory for all user agencies-railways or roads-to ensure that safe animal passageways plans (underpasses, overpasses, culverts, etc) are prepared while drawing up the blueprint for linear infrastructure projects.”

With the power vested in the Union, and the Governments of each State under Article 246 read with Schedule 7, especially with reference to Entry 17A, i.e., Forests, and Entry 17B, i.e., Protection of Wild Animals, and Birds of Concurrent List, i.e., List III of the Indian Constitution, the nation has to act fast, in order to achieve Goal 15 of the SDGs. By achieving the goal of sustainable wildlife infrastructures can one ensure wildlife movement, habitat connectivity, and mitigate the number of wildlife accidents, and road-kills.