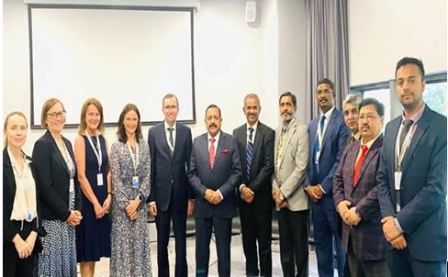 meeting with the Minister for Climate and Environment of Norway Mr. Espen Barth Eide, on the side-lines of the UN Ocean Conference at Lisbon, Portugal and discussed several issues of mutual interest.

The meeting comes close on the heels of the 5th India-Norway Task Force meeting held here in New Delhi last week on the blue economy between the Norwegian Ambassador to India, Hans Jacob Frydenlund, and the Secretary, Ministry of Earth Sciences, Dr. M Ravichandran.

The Task Force meeting had agreed on new projects and a roadmap for connecting ocean industries from both sides. Both Countries decided to explore more cooperation on green maritime, sustainable ocean management, deep ocean technology, and offshore wind.

During the latest meeting, Dr. Jitendra Singh and Mr. Espen Barth Eide expressed satisfaction over the progress made at the Task Force meeting. They reviewed the dialogue and progress on the various issues that had been under discussion. They appreciated the ongoing close cooperation between the two countries and hoped the partnership would grow from strength to strength in the future.

Dr. Singh also referred to a pilot project between the Norwegian University of Science and Technology (NTNU) and the Indian Institute of Technology-Kharagpur (IIT-KGP) agreed in January this year to improve the inter-disciplinary skills, digital literacy, and critical thinking of undergraduate students. He emphasised that these skills are highly needed with the growing demand for new technologies and innovative solutions in the maritime sector.

Minister Calls for Start-up Culture in the Media & Entertainment Sector