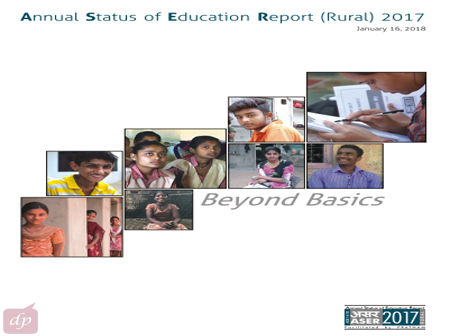 For some time now, we have known that a large number of children are attending school but not learning enough. Recently published Annual Status of Education Report (ASER) 2017, ‘Beyond Basic’, which had its focus on 14-18-year olds who are above the elementary schooling, underlined that learning crisis seen in elementary school children in previous years seem to carry forward in secondary school education. It revealed only 43 percent are able to do a simple division correctly; 40 percent of 18-year olds can’t read a simple sentence in English and even more 25 percent in the 14-18 years age group can’t read basic text in their own language; 58 percent can’t read their state map and 14 percent can’t read India map and almost 30 percent youth are not enrolled in schools or colleges.

Due to the enactment of the Right to Education Act (RTE) and Rashtriya Madhyamik Shiksha Abhiyan (RMSA), by 2016 the percentage of 6-14 years dropping out of schools had come down to 3.1 percent and that of 11-14 years to 4.6 percent. The recent data shows that there is hardly any difference between boys and girls enrolment at age 14 but when they turn 18, the dropout rates see a spike-, it is 28 percent for males and 32 percent for females. Therefore, learning deficit statistics remain an assortment of concern. It brings to light that learning cannot be confined to merely reading text and solving problems, but it should also look at the multi-faceted challenges of young adults.

Simultaneously, children at the elementary schooling faced challenges relating to abysmally poor learning. According to ASER 2016, the proportion of all children in Class V who can read a Class II level text declined to 47.8 percent in 2016 from 48.1 percent in 2014. The proportion of all Class VIII students in rural India who can divide a three-digit number by a single-digit one has dipped to 43.2 percent in 2016 from 44.2 percent in 2014. And while 32 percent of children in Class III could read simple English words, up by 3.5 percentage points over 2009, in Class V, only one out of every four students could read an English sentence. ASER 2016 underlines that this situation has remained unchanged since 2009, when the RTE, Act was passed by Parliament. And within the Indian states, the variance of learning level is large such as in Jharkhand and Arunachal Pradesh, the percentage 36.4 and 25.5 respectively for class V student who can read class II level text whereas in Himachal Pradesh and Manipur, it is 70.5 and 70.7 respectively. There is a trend in almost every state, where more than 50 percent of elementary schoolchildren are in private schools, indicating the dwindling faith in the government schools. These learning deficits are observed across all grades and accumulate with each grade and it remains lifelong challenges.

Therefore, recognizing the importance of human capital which accelerating economic growth, it urges the following questions. Why are children not interested in schooling? How is a child supposed to understand the curriculum of their current grade? Does school infrastructure make for quality schooling and improved learning outcomes? How can teachers and government make child-friendly environment and introduce inclusive practices to improve the quality of learning?

To address these challenges, teaching and learning practices require more inclusive approaches. For elementary schooling, teachers should create child-friendly environment through innovative processes such as activity-based learning practices. The government and teachers must act as facilitators for by putting the requisite infrastructure in place. Teacher training that will foster self-learning should be encouraged and children should be allowed to study according to their aptitude and skill.

In India, according to Census 2011 data there are 164.48 million children of 0-6 years of age, policy makers should emphasize on early childhood development as children develop the cognitive, physical, social and emotional skills that they need to succeed in life. To the benefit of all children, school requires creating opportunities, space and scope through promoting vocational skilling under ‘Skill India’ programme in the form of formal schooling that will encourage them to think about the possibility of going back to school instead of absolute rejection faced from school. Unless families, communities and children are not equipped with knowledge and skill so that they can take advantage of all possible opportunities, India will not be able to reap the demographic dividend. The new education policy is expected to be released soon. It is hoped that it will come with concrete solutions that will address all the learning needs of children and impart them with lifelong learning skills.

The difference between literacy and education need to be diminished: Harish Chandra Meena