The Prabha Khaitan Foundation, Kolkata, today announced the online launch of “Dear Mama”– a collection of intimate letters to their mothers – written by billionaires, spiritual gurus, 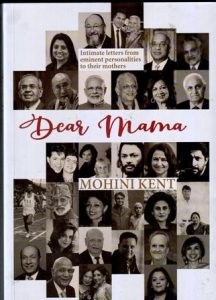 The book was formally launched by Cherie Blair, British barrister, writer and women’s rights activist, also the wife of former UK prime minister Tony Blair, at the Kitab online event presented by Shree Cement and joined in by hundreds of invitees from across the globe. Cherie Blair was in conversation with Mohini Kent, author and founder-chairperson of LILY Against Human Trafficking – a charitable organisation which works against the trade in human beings and child trafficking. The event was conducted by Swati Agarwal on behalf of Prabha Khaitan Foundation.

“It is a great honour for Prabha Khaitan Foundation to host the unveiling of `Dear Mama’ which is a stupendous collection of letters to one’s mothers and which evokes deep feelings of love, emotion, compassion and inspiration. The formal launch was slated for March 2020 at an event in London but had to be postponed due to the Covid pandemic. It was a very touching experience for me to write a letter to my late mother for the book,” said Sundeep Bhutoria, Trustee, Prabha Khaitan Foundation.

Mother is the first guru and guide of the children. Mahatma Gandhi, Einstein, Abraham Lincoln, the Buddha and others owed a debt to their mothers. Even HRH Prince Charles publicly addressed the Queen as ‘Mummy’ at Her Majesty’s Diamond Jubilee celebrations. But some mothers betrayed their daughters, who were sold as slaves. The letters of those girls in this book speak of heartbreak, trauma, loss and betrayal.

Cherie Blair, human rights lawyer, is the Chancellor of the Asian University for Women; Governor of the London School of Economics; a founding member of Omnia Strategy LLP; and the Cherie Blair Foundation for Women supports women entrepreneurs in developing countries.  She lives in London with her husband, Tony Blair, former Prime Minister of the UK.

Lady Mohini Kent Noon is an author, film-maker, charity worker and journalist. She is the Founder Chairperson of Lily Against Human Trafficking. And Global Envoy in the UK of the International Buddhist Confederation. She is the author of several books, including Black Taj, a novel, and Nagarjuna: The Second Buddha. She has written and directed feature films, documentaries, and worked with Sir Ben Kingsley. Her stage plays include Rumi: Unveil the Sun. She also hosts spiritual teaching tours in the UK.

Excerpts from the book “Dear Mama”

Prime Minister Narendra Modi: “Mother is the ever-flourishing spring of inspiration and our strength to overcome all the challenges.”

HH the Dalai Lama: “My mother was my first teacher of compassion. Those who receive affection from their mothers as children have much greater inner peace in their adult lives.”

Cherie Blair: “When I was called to the Bar in 1976, you were the only parent entitled to be part of my achievement. I wanted you to be acknowledged.:

Sir Cliff Richard: “Death is never fair. You gave us life – me, Donna, Jacqui and then Joan – and death took yours. But… he couldn’t take our memories.”

G.P. Hinduja: “It is said that God created mothers because He could not be everywhere.”

Kiran Mazumdar Shaw: “Not many daughters can boast of the fact that their mother is a successful entrepreneur at the age of 87. This fiery independent streak is what I have inherited from you. You have been a pillar of great strength and inspiration to me.”

Sharmila Tagore: “I have taken you for granted. I never told you how much I appreciated your cooking (and) your talent with jokes.”

Yogi Sri M: “I beg forgiveness (from my mother) when her beloved son ran away to the Himalayas and was given up for dead. (She) welcomed me after years when I came back as a wandering yogi. Only a mother can do that.”

Rakesh Omprakash Mehra: “Like an ocean she had the capacity to receive the rivers of pain, purify it, and rain it back on us as love. They say you passed away, but in my daughter I feel you come back, in my wife I feel your loving and caring. For me, LILY is an ode to every mother.”

Arshad Warsi: “The first thing I need to do, in fact every son and daughter needs to do, is apologise for not being able to match up to the unconditional love mothers have for their children.”

Shonali Bose: “All of my films – Amu, Margarita with a Straw, The Sky is Pink –have been about the mother-daughter relationship and death. That’s because you were so central to my life till your shocking death when I was 21.”

Milkha Singh: “Our home was in Multan. Then we heard India was going to be partitioned. A Muslim mob came for us with their guns. Father shouted: ‘Bhaag Milkha! Don’t look back!’ When it was quiet, I went back, but they had killed you, everyone. My last memory of you is lying on your body and weeping.”

Khalid Mohamed: “You lost your only child Zubeida in an air crash. We only found mangled parts of her body on the site. When my mother Zubeida perished, you were my protector and live-giver. Fayazi Ma, it’s your 25thdeath anniversary, and I assure you I am OK.”

Dr Karan Singh: “She was highly compassionate and caring, and I learnt a great deal from her. I learnt the beautiful Dogra-Pahari folk songs that she used to sing on festive occasions. In our culture the mother has a very special place. There are our physical mothers, but at a deeper level in Hinduism, the mother goddess appears in many forms.”

Raghu Rai: “When the partition took place, I was just five. Little did I understand what it meant for my mother to look after ten children without any help. My mother wove a magic thread to keep a large family happy and united at low cost.”

Vijay Khattar: “Though you were deaf and mute since birth, you remain the most expressive person I’ve known. I wondered what it must be like. I feared the weight of silence. When the political trouble started in Kashmir were forced to leave because of the killings. You made this difficult and uncertain time easier for the family.”