Is Kerala’s development not migrant inclusive? 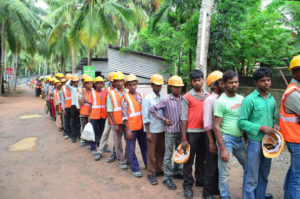 he state of Kerala has always been an exemplary example to other states in India by having maintained models of human development which are either at par with many developed European nations or praised by the United Nations itself. The state, which already has the highest literacy rate in the country, also boasts of low mortality and fertility rates and high life expectancy.

A study conducted by Muttikal B Thomas and Kuriath S. James titled –“Changes in mortality and human longevity in Kerala” observed how despite low per capita income and higher incidence of malnourishment, Kerala in the past century has conformed to patterns of demographic transition as observed in developed countries due to policy interventions by the government in providing superior primary healthcare facilities. According to the CMID stats, the male and female life expectancy has improved from 44.2 years and 48.1 years during 1956-61 to 72.2 years and 78.2 respectively during 2011-2015. The IMR was reduced to 10 in 2016, while India lay at an IMR of 34. The significant reduction in mortality rates has also lowered the fertility rates to 1.6 in 2016. This led to subsequent reduction in the natural population growth rate as well. The cumulative effect of all this is the increase in the ageing population favouring the above 60 category while there is a worrying reduction seen in the migration-prone age groups and younger age groups, especially 0-14 years.

A recently published policy brief by the Centre for Development Studies (CDS) with the Centre for Migration and Inclusive Development (CMID) iterates that with the mortality and fertility rates touching nearly saturation points, there exists a need for policy interventions by both the state and the Centre to tackle the impact of the same on migration scenarios.

Kerala has witnessed an influx of migration since its formation. Due to shortage of labour force in Kerala and better government schemes, wages and living conditions than their native towns, the state is considered one of the best places by migrants for employment. According to Gulati Institute of Finance and Taxation, in 2013, 2.5 million migrant workers from other states were estimated to be present in Kerala, which rose to an estimated 3.5 to 4 million workers in 2017. Even though the economic stagnation in 2017-2018 has affected this flow, it is likely to grow again once the stagnation is over.

“High literacy rates have led to vaccum of workers for jobs requiring physical labour which is filled by migrant workers. Meanwhile, the natives have always unfounded perceptions of rise in crimes and diseases due to the presence of the migrant workers. Such perceptions need to be removed as host community sensitisation towards migrants is of utmost importance.” Benoy Peter, Executive Director, CMID

The emigration patterns in Kerala have shown the natives favouring the Middle East and developed countries like North America and Western Europe for better job opportunities. However, the number of international migrants from Kerala living outside the country, which peaked during 2013 with 2.4 million migrants dipped to 2.2 million in 2016. The ageing of the population and the decrease in the migration-prone groups have accentuated this downward trend. The nationalization schemes and similar measures in the Middle East, which accounted for more than four-fifths of migrants from Kerala, is likely to further reduce the number of international migrants. Similar measures have been undertaken by other traditional destinations.

The increase in the ageing population has made migrant workers in Kerala an imperative part of its economy as they fill in the vacuum of labour force and effectuate industrial growth. On the other hand, the decline in migration-prone age groups, reduction in emigration and return of emigrants is likely to adversely affect the economy due to reduction in remittances to the state, which according to the policy brief accounted for 36.3 per cent of Kerala’s Net State Domestic Product.

“The state needs to realise that migrant workers are an integral part of the Keralite society. They fill in the gaping holes in the Keralite economy by taking up jobs that are considered dirty and menial by Malayalis. The need of the hour is to create policies that integrate the internal migrants into the society. The policies should empower them socially politically and economically so that they cater to the development of Kerala as well as their own state.” Professor Irudaya Rajan S

The aforementioned estimates indicate that the quantum of migration to Kerala would soon surpass the quantum of emigration from Kerala. To tackle this crisis, the policy brief suggests a holistic intervention by the state government by creating employment opportunities within the state, equipping the natives for the international job market and reintegrating the returned migrants and their families.

Regarding migrants in Kerala, given the saturation of most human development indicators, the state ought to realise the importance of migrants for its economy and create awareness among stakeholders to create migrant friendly policies. CMID suggests the expansion of the Department of Non-resident Keralites Affairs (NORKA), created in 1996 to a Department of Migrant Affairs for better management of the in-migration. The policies need to be tailored in a manner that they cater to the needs of the migrant population in Kerala, while helping the state to tackle the human resource crisis as well.

The writer is a policy researcher and a student at Faculty of Law, Delhi University. She can be reached on twitter @SherinJose15