Touted as the sleeping giant of football, India today is ‘bleeding blue’. 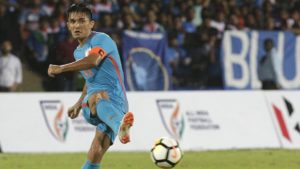 ontrary to the popular connotation that this phrase has acquired in the ground of Indian cricket, in the playfield of football it surely seems to have stood true to its literal meaning. With a dearth of funding, lack of enthusiasm and collective policy of ignorance towards the sport, we- the stakeholders have quite successfully made this football giant bleed, bleed rather profusely so much so that an international level player is compelled to make appeals to the Indian public to, for once, mark its presence if not support for the game.

A couple of days back what made news was an ardent appeal by the Indian international football team captain Sunil Chhetri to the public to mark its presence for an upcoming intercontinental football  Cup match taking place in Mumbai. While it did manage to stir quite an Indian emotion and lead to an eventual win, what it brought to fore was our failure in meeting this collective responsibility towards our sporting culture and sportspersons.

“As was rightly questioned by Sunil Chhetri himself, this also brings to perspective the much ignored question- Why is our sense of association to any sport directly correlated to the variable of success?”

On a position of 97 in the FIFA world rankings, with an average ranking of 134, ever since its evolution, the Indian football scenario clearly seems to be dismal with analysts saying that we are easily 20 years behind the rest despite being amongst the few starters of the game. So, forget the 2022 or 2026 world cup, the earliest we could think of the qualifying shall be around 2034 and following the current timeline, winning a cup seems like a far cry. But for even that to happen, we need to start now and right from the lowest rung. Baby leagues targeting the children as young as 6 years old seem quite a welcome initiative of the AIFF, but how long this initiative will take in its journey from paper to the field is what one has no answer for. To add to these woes is the lack of structural nature of the ISL and I-leagues which apart from being a mandatory requirement as per FIFA rules uphold much of a strategic importance and yet remain undercapitalized by the AIFF. Lack of professionalism of coaches and administration, not a single national training center and poor upkeep of the bare minimum amenities clearly indicate that a 360 degree study of this sport is required.

With the AIFF being one of the major stakeholders, an equal blame falls on the shoulders of the government. We proudly send our team to the Asia Cup, bring up false notions of barefoot football , lack of talent, genetics being an impediment to qualification, but the fact of the matter remains that the government has for the longest time used these excuses to side step the real problems of inadequate fund allocation, amenities or political agendas of administrative bodies. While that remains the plight of the men’s football, the women’s game has failed to even qualify for being ranked by FIFA.

“Clearly, it is time for the government to rethink whether it still wants to dwell on its Asia Cup qualification or the grim 10 per cent annual budget increase or if it in the right spirit intends to study the economies of the game and channelize the Khelo India and Mission XI Million plans into making a world class sporting culture.”

This is nothing but a small plea from me to you. Take out a little time and give me a listen.: hub.am/YZZGgu Wouldn’t you say?

Today India stands third after USA and China in terms of tickets bought for a nation which has not qualified for FIFA World Cup 2018. Despite this, the government, the media and we as spectators try passing the buck on the length and structure of the format as the prime cause of it being less engaging. In this scenario what can be a guiding light is the Chinese model which shows the sheer brilliant understanding of the Chinese Government of the dynamics of the game and its incorporation of the issue into the economic plan by hiring the best coaches, players, technicians, dieticians laying a ground for turning the nation from a struggling non-performer to a powerhouse of the world.

From FIFA World Rank 173 in March 2015 to Rank 97 in 2018, the Indian football team has surely come a long way in the face of all challenges, but the onus shall now lie on us and how we extend our support to them, not for a win or a loss, but for the mere appreciation of their courage to flail and to progress towards building a national asset in the form of a sporting culture.

Is Kerala’s development not migrant inclusive?

Would Index of Opposition Unity work against NDA?