JNUSU elections: As it unfolded

Amidst rumour-mongering and a 15-hour delay in counting, United Left won even as ABVP emerged as the single largest party. 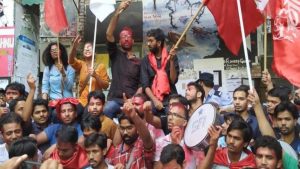 Akhil Bhartiya Vidyarthi Parishad (ABVP) alleged that the Election Committee (EC) tried to manipulate the polls. They claimed that EC started counting votes without informing ABVP representatives. This led to disruption of counting for around 15 hours. The counting resumed at 6:30 pm in the evening hours on Saturday.

Rumor had it that some ABVP students brought goons from Delhi University who came to JNU campus with ‘lathis’ and sticks. The JNU student community was told to be careful.

Another rumour doing the rounds was that some left wing parties and students brought goons from Jamia University and tried to manhandle the ABVP students.

After a 15-hour long wait, the JNUSU election committee started counting the votes and the final result was declared.

“The Left unity (AISA+SFI+DSF+AISF) won all the central panel seats with N Sai Balaji as President, Sarika Choudhary as Vice president, Aejaz Ahmad Rather as General Secretary and Amutha Jayadeep as Joint Secretary.”

This year, Rashtriya Janata Dal (RJD) entered in the student politics arena with its independent presidential candidate Jayant Kumar who secured 540 votes. The NSUI position was far behind BAPSA and RJD.

“There were four independent candidates for the President post including Nidhi Mishra, Saib Bilawal and Vikash Yadav who secured 59, 125, and 402 votes respectively.”

In 2001, now BJP senior leader, Sandeep Mahapatra contested JNUSU elections for the post of President with ABVP ticket and was selected as the president of JNUSU. In 2015, after 14 years, an ABVP candidate Saurabh Kumar Sharma won the seat of Joint secretary.

The writer is a research scholar pursuing Ph.D from School of International Studies, Jawaharlal Nehru University