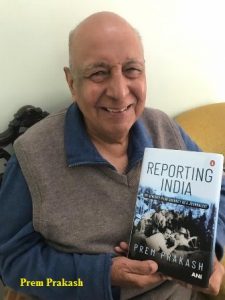 Seventy-Year Journey as a Journalist at Kitaab online book launch event organized by Prabha Khaitan Foundation of Kolkata in association with Penguin India. Eminent litterateurs, scholars, book lovers, students and journalists from across the country joined the virtual event for an engaging hour-long session with the author Prem Prakash; panelists Sheela Bhatt and Sushant Sareen and Ms Aakriti Periwal of PKF introduced the session and Venkat Narayan made the concluding remarks.

Reflecting on the seven decades of journalistic work by Prem Prakash, Minister of External Affairs, S Jaishankar, said, “Prem Prakash’s book in reality is a celebration of his life. He has been there and done that and shaped our recollection of events and the image of India. He has always been at his detached best. Prem, a great recorder of events and history, has always been at the right place at the right time. His book is an engrossing flow which the young generation of today, less conversant of that past era, must read. India has gained enormously from his work.”

“The Chini Hindi bhai bhai slogan was nonsense. India’s views toward the Chinese in the past can be described as a kind of romanticism. We gave up everything on Tibet while the Chinese asserted its sovereignty and went on to capture Tibet,” said Prem Prakash, who set up Indian news agency Asian News Network (ANI) in 1971 to provide syndicated multi-media newsfeed to Indian and foreign media houses. ANI was also the first news agency to syndicate video news.

The author, who, as a journalist, had first hand witnessed the pitiable condition of ill-equipped Indian Army mauled by the Chinese during the 1962 China–India border war, says in his recent book that Nehru felt personally responsible for the debacle as he had ignored the modernization of India’s armed forces at the outset of his term in office. Nehru, who believed that war could never be a tool for furthering diplomatic ends, found his peacenik worldview torn asunder by an aggressive China. He did try to make amends to revive and re-equip the Indian armed forces during the 20 months he lived after the India–China war.

The bogey of “Islam in danger” was used to create Islamic fundamentalism in Afghanistan.

India is a big country and Afghanistan needs our help and we must make sure we do help them. We must ask: Why Chabahar port is taking so long to become functional? It is in India’s interest to bring Afghanistan back to what it used to be in the happy days. The Taliban took them back to the stone age.”

On the quality of today’s journalism, Mr Prakash said, “There are many huge organizations now. For heaven’s sake tell your reporters to go to the field and report. Another fact is that the reporters are opinionated which isn’t good. Young journalists should read a lot, go to the locations and report facts.”

Prem Prakash is among the few journalists who interviewed all the prime ministers of India in his illustrious career spanning over seven decades. He had reported the Bangladesh Liberation War of 1971 from inside Bangladesh risking his life. He has been at the frontline reporting some of the historic events like liberation of Goa, India–China border war, Indo-Pak wars, Bhopal gas tragedy, attack on Rajiv Gandhi in Colombo and so on as a photographer, reporter, and cameraman. He has witnessed natural calamities and insurgencies, which he has penned in his book.

We still see the world and India from a western correspondent’s view. I fail to understand why Indian media houses, which make huge profits, fail to depute correspondents in foreign countries and present news from an Indian perspective.