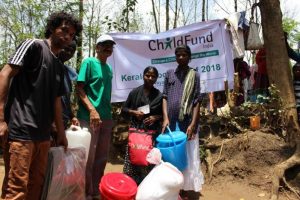 The Kerala Floods, one of the worst witnessed after 1924 in Kerala, claimed nearly 500 lives and displaced lakhs of people. The deadliest deluge in close to a century dealt a severe blow to the scenic state, wrecking its tourism industry, destroying standing crops in thousands of hectares and inflicting huge damage to its infrastructure.

Among the many good Samaritans who contributed to the rescue and rehabilitation work for the state and its people, there were several organisations that worked relentlessly and are still continuing with the redevelopment works. One such is ChildFund India which has initiated a rehabilitative effort targeting 25 villages in Wayanad district of Kerala for a period of six months, with a particular focus on children.

ChildFund India deployed a team from its National Emergency Response Team (NERT) to Wayanad district on August 20, 2018. The ChildFund members with local volunteers visited a relief camp, four villages and interacted with children, women, adolescent girls, school teachers, NGO workers and other stakeholders to understand the situation and needs.

In an exclusive interview with Delhi Post, ChildFund India’s Country Director Neelam Makhijani shares the initiatives taken during the Kerala floods, the findings from their assessment and how the rehabilitation has panned out till now.

Delhi Post: We have seen the level of destruction caused by the floods and the relief and rescue operations on ground. How is the rehabilitation process going on?

Neelam Makhijani: The most affected were elderly and children. The elders were distraught after losing everything they had saved, they were dependent on others for every support. Schools were closed for almost a month, leaving the children wandering aimlessly, nothing to do to come out of the distress they were experiencing, to divert them and cope with. The parents had lost the only source of income – agricultural fields, the crops. They were without work almost for a month, which affected their overall household economy, access to health and support to children. They had lost all of their belongings, leaving them in shelters. It was a shock they were trying to recover from. They are in distress thinking about ways to rebuild their lives and requesting for support.

Delhi Post: ChildFund India did a needs based assessment in Wayanad, one of the worst affected districts in the state. Can you tell us more?

Neelam Makhijani: Wayanad is one of the worst affected and has the highest number of tribal population in the state. The places where we are responding are the most remote areas in Wayanad, having very limited access to the nearby cities to reach out for support or to receive support. Tribal population is the most deprived, excluded and vulnerable as compared to others and ChildFund India focuses on reaching out to such children and their families with its programs including emergency response program. Hence, we decided to respond there in coordination with other organisations in Kerala to ensure we extend support effectively.

The rapid assessment of the targeted villages revealed that people have lost all their household belongings to the floods and the houses are filled with mud and drinking water sources (open wells) have been contaminated by flood waters. Toilets have been severely damaged posing a risk of diseases. There is high potential of spreading of diseases due to contaminated water and flood water stagnation in the villages and its surroundings. Hygiene items, utensils and mosquito nets emerged as critical needs to restore normalcy at household level. There is severe impact on Anganwadi centres (ECCD) and schools. Schools, which are on higher ground levels, are used as relief camps. Children have lost all their educational materials, uniforms, etc. The affected area is a tribal inhabited location and school drop-out is prevalent. Severe loss to livelihoods has been witnessed. The entire standing crop is washed away by the floods and people cannot find any work at the moment.

Currently we are participating in the Joint Detailed Needs Assessment being undertaken by the Sphere (a coalition of humanitarian agencies) and the report is expected within this month which will provide detailed information on findings with numbers. 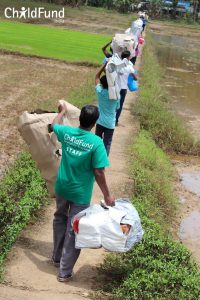 Delhi Post: What are some of the initiatives taken?

Neelam Makhijani: Some of the other key interventions include Compact Family Kits comprising Hygiene kit, Mosquito Nets and Household Utility kits provided as rapid relief to 2,500 vulnerable households consisting of around 12,500 people including 5,000 children. Based on the needs assessments, restoration of Anganwadi centres and schools is being prioritised.

WASH activities are being undertaken to mitigate ill health, waterborne and other communicable diseases. Repair and Restoration of water points is an important relief and early recovery activity. Disinfection of school and village surroundings along with WASH awareness campaigns are being carried out in at least 25 villages.

Establishing and Strengthening Community Based Child Protection Mechanisms so that they are in line with the national flagship program Integrated Child Protection Scheme (ICPS) aimed at children in difficult circumstances and livelihood support to 1,000 vulnerable families to restore their lost livelihoods is being provided through seeds support, kitchen garden support and other off-farm livelihoods opportunities.

Delhi Post: As per the international guidelines for emergency response by WHO, children are not to be asked about their experiences from disasters or make them think about the same in any manner to help them recover faster. So, what has been done to help them heal?

Neelam Makhijani: Children were indoors for nearly a month due to heavy rainfall and closure of schools. Children whose homes were drowned due to floods stayed in relief camps for nearly 15 days. Even after coming back to their homes, Children had to remain inside wherever water had not receded in the surroundings.

This has limited children’s movement and play activities, which is one of the crucial activities of their daily life. Most of the interactions with children revealed that they did not get the opportunity to play and missed the schools. They want to play both indoor and outdoor games.

So far, ChildFund has established Child Centered Spaces (CCS) where children are engaged in normalising activities as part of psychosocial first aid. The trained volunteers are currently monitoring and observing children at CCSs for the signs of unusual behaviour, like children not speaking, not playing, not coming to CCSs, etc, so that these children can be supported with professional counselling services. Also, hundreds of children have benefitted with education kits that consist of school stationery to resume their schooling. The distribution work is still on.

Tell us about the response team working on this initiative.

Neelam Makhijani: ChildFund India has partnered with a local NGO in Wayanad named Tribal Unity for Development Initiative (TUDI) to support with the emergency response work in the target villages. Currently, there is a three-member team from ChildFund India to implement the response plan, consisting of a Disaster Risk Management Program Manager who is responsible for overall supervision of the response including Government coordination and networking with other humanitarian agencies, Emergency Program Coordinating undertaking field level activities and its coordination to ensure smooth implementation and Admin/Logistics Manager who supports the team with the procurements, supply chain management and other emergency logistics.

Neelam Makhijani: All our programs are designed with an objective of sustainable impact. We will stay with the affected families till they bounce back to normalcy. We will review our interventions after six months and design or extend interventions based on that.

Delhi Post: Are you planning anything similar for the Nagaland floods and Kodagu floods in Karnataka?

Neelam Makhijani: We are doing the backend work in Kodagu district of Karnataka so that we can distribute family kits at the earliest.

Franco Mullakal should face the law of the land like any other citizen: Father Geroge Pulikuthiyil