It is quite shocking that the press, considered as the watchdog of democracy, is involved in public fund misappropriation. As per the reports available, the press club office bearers embezzled the amount they received and neither office nor library has come up even after 8 years. 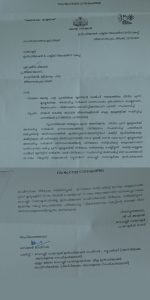 the Press Clubs of Kerala. Earlier, the Governor had sought an explanation from the State Government on 2 December 2018 after complaints that the press clubs have misappropriated more than Rs 3 crore of government funds. Governor Khan had also sought clarification from the government when the High Court considered the case on January 15 about the misappropriation of funds by the Kerala Union of Working Journalists (KUWJ) unit in Delhi.

Following the intervention of the Governor and the High Court, UV Jose, Director, Public Relations Department, directed the department’s Deputy Directors to take strict action against the Press Clubs involved in the misappropriation. However, the details of the inquiry are not yet available. The Deputy Director of PRD, Kerala House, New Delhi, was directed to submit an investigation report about the misuse of government funds by the Delhi unit of the KUWJ by 25 February. Biswas Mehta, Additional Chief Secretary, State Vigilance Department, has completed a departmental inquiry into the allegations of corruption and fund misappropriation of the Press Clubs.

The deputy director of the PRD at Kerala House has been asked to submit an inquiry report into the misuse of government fund amounting Rs 25 lakh. The amount was given to the KUWJ Delhi unit in 2012 for the provision of Press Club office and library facilities in Delhi.  However, as per the reports the KUWJ office bearers embezzled the amount they received and neither office nor library has come up even after 8 years. The state government gave Rs 24,99,999 for the Thiruvananthapuram Press Club for its Media Management and Journalist Training Centre. The Secretary has not yet submitted the audited utilisation certificate for the funds received. The training centre is now in an operational crisis as the press club bank account is frozen due to the intervention of its former secretary Radhakrishnan, who has filed several cases in the court. Even the salaries of its staff amounting to Rs 152,203 are not released. The club’s daily income is not enough to meet its operational expenses. Radhakrishnan was arrested for harassing a colleague by trespassing into her house. He was later suspended from the press club following a protest march by the Network for Women in Media India (NWMI).

Press Clubs in Thiruvananthapuram, Kollam and Alappuzha have not submitted utilisation certificates for crores of public fund received from the government.

The Inspection and Monitoring Committee of the PRD found that the Thiruvananthapuram Press Club secretary submitted fake vouchers when he was given notice to submit utility certificate by the government.

As a result of the intervention of the State Governor’s office, the concerned PRD deputy directors have directed all press clubs to submit utlisation certificate as duly audited by the chartered account along with the affidavit of the Secretary within 25 days. It is quite shocking that the press, considered as the watchdog of democracy, is involved in public fund misappropriation.

The state governor has been in the limelight due to his confrontation with the CPM-led state government with regard to the resolution passed by the State Assembly on the controversial Citizenship Amendment Act (CAA).