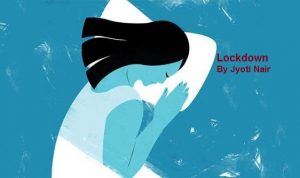 Served alongside, some meek bland rice

Slump into our gullets.

Destinies applauded, not one morsel wasted

We are! Cower in gratitude!

“Even to almighty’s chagrin, those migrants have been eye sores.”

Some rebukes stirred into the air

“But now they have footwear, special trains being released”

Hitherto, some opinions, shoved and jostled, in most homes

Amidst some resentment, ruminated by many, during nights

Only to be shoddily gulped, with some toothpaste, the next morning.

Jyoti Nair is a seasoned Learning and Development Professional. She currently works for a top-notch Indian MNC as Capability Development Manager in Mumbai. Jyoti is an ardent animal lover, a barefooted stroll on wet grass is a stimulus that helps her to unwind. She believes in living for her soul's calling, she signs in saying, have you ever realised that those shrugged-off life trivia may store the most precious moments from the walks of your life. She can be reached on twitter@noIMEMYSELF