There have been several reforms to unleash the potential, e.g. Formation and Promotion of 10,000 FPOs along with necessary financial support under Atma Nirbhar Package for Agriculture.

The Government has adopted several developmental programmes, schemes, reforms and policies that 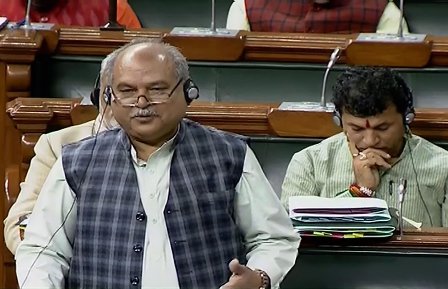 focus on higher incomes for the farmers. All these policies & programmes are being supported by higher budgetary allocations, non-budgetary financial resources such as creating Corpus Funds like Micro Irrigation Fund etc. There have been several reforms to unleash the potential, e.g. Formation and Promotion of 10,000 FPOs along with necessary financial support under the Atma Nirbhar Package (Agriculture). Under Atma Nirbhar Bharat special attention is being paid for the creation of infrastructure for which “ Agri Infrastructure Fund (AIF) has been created with a size of Rs. 100,000 crore. Other special initiatives include Supplementary Income transfers under PM-KISAN; Pradhan Mantri Fasal Bima Yojna  (PMFBY);  Pradhan Mantri Krishi Sinchai Yojana (PMKSY); Increase in Minimum Support Price (MSPs) for all Kharif & Rabi Crops ensuring a minimum of 50 per cent of profit margin on the cost of production, Bee-Keeping; Rashtriya Gokul Mission; Blue Revolution; Interest Subvention Scheme; Kisan Credit Card (KCC) that now offers production loan to even dairy & fishery farmers besides agricultural crops etc. For environmental sustainability, National Mission for Sustainable Agriculture (NMSA) has been launched in the year 2014-15 which aims to evolve and implement strategies to make Indian agriculture more resilient to the changing climate. The adoption of Drone technologies in agriculture has the potential to revolutionize Indian agriculture. In order to make Drone technology affordable to the farmers and other stakeholders of this sector, financial assistance @ 100 % cost of drone together with the contingent expenditure is extended to ICAR/SAU/ State governments/ State government Institutions under Sub-Mission on Agricultural Mechanization (SMAM) for its demonstration on the farmer’s fields. A list of achievements is seen below:

The government has increased the MSP for all mandated Kharif, Rabi and other commercial crops with a return of at least 50 per cent overall India weighted average cost of production from 2018-19.

Launch of PM-KISAN in 2019 -an income support scheme providing Rs. 6000 per year in 3 equal instalments. A total of Rs. 1.8 lakh crores have been released so far to more than 11.7 crore farmer families.

PMFBY was launched in 2016 addressing problems of high premium rates for farmers and reduction in sum insured due to capping. In the past 5 Years of implementation – 29.29 crore farmer applicants enrolled and over 8.99 crores (Provisional) farmer applicants have received claims of over Rs. 103903 crore. During this period nearly Rs. 21448 crore were paid by farmers as their share of premium against which claims of over Rs.103903 crore (Provisional) have been paid to them. Thus for every 100 rupees of premium paid by farmers, they have received Rs. 484 as claims.

The benefit of concessional institutional credit through KCC at 4% interest per annum has also now been extended to Animal Husbandry and Fisheries farmers for meeting their short-term working capital needs.

A special drive has been undertaken since February 2020 to provide concessional institutional credit with a focus on covering all PM-KISAN beneficiaries through Kisan Credit Cards (KCC). To date, 270.29 lakh new KCC have been issued with sanctioned amount of Rs.2,88,832 crore.”

Soil Health Card Scheme was introduced in the year 2014-15 to optimize usage of nutrients. Soil health cards have been issued free of cost to nearly 11 crore farmers under a nationwide program.

Paramparagat Krishi VikasYojana (PKVY) was initiated in 2015-16 to promote organic farming in the country. Two-year achievement under PKVY scheme-19043 clusters have been formed and an area of 3.81 lakh ha has been covered benefitting 9.52 lakh farmers. In addition, under Namami Gange Programme 123620 ha area covered and under natural farming 4.09 lakh ha area covered.

In addition, to facilitate organic certification at affordable cost and easy to adopt approaches, a New Participatory Guarantee System (PGS) certification was launched in 2015. This PGS system is unique in the world and is the largest participatory organic certification programme in the world. Around 11 lakh small and marginal farmers are certified under PGS certification. A Jaivik kheti portal has been initiated to assist the small and marginal farmers in selling their organic products directly to consumers. As of now, around 5.56 lakh farmers are registered on the portal. In addition, quick certification of default organic areas such as islands, remote, hilly areas have been initiated under the Large Area Certification programme. This will enable small farmers to market certified products immediately without waiting for the normal certification period of 3 years. Around 14445 ha in Car Nicobar Islands of the Andamans is now certified under the programme helping marginal farmers in the area for marketing certified products. Proposal of 5000 ha area has been received from Ladakh under LAC and fund Rs 11.475 lakh has been released. The entire cultivable land of 2700 ha area of Lakshadweep has been certified organic under Large area certification. Support for individual farmers for certification has also been introduced to encourage farmers to take up organic farming.

Neem Coated Urea has been introduced since 2015-16 to ensure the long availability of nutrients in the soil by slow release of nitrogen. It has also helped in curtailing the diversion of urea for non-agricultural activities.

Scheme for Formation and Promotion of 10,000 FPOs launched with a total budgetary provision of Rs. 6865 Crore in February 2020.

So far, more than 4965 FPO produce clusters have been allocated to respective Implementing Agencies (IAs).

Cluster-Based Business Organizations (CBBOs) have been empanelled by different IAs and already allocated blocks to them.

Per Drop, More Crop component of Pradhanmantri Krishi Sinchai Yojana (PMKSY_PDMC) aims to increase water use efficiency at the farm level through Micro Irrigation technologies, i.e., drip and sprinkler irrigation systems. Under the scheme, an area of 20.39 lakh hectares has been covered and about 16 lakh farmers were benefited under micro-irrigation during 2019-20 & 2020 – 21. An amount of Rs. 5262.20 crore has been provided to states as central assistance under PMKSY-PDMC during 2019-20 and 2020-21.  For the year 2021-22, an amount of Rs. 4000.00 crore (B.E.) has been allocated for implementation of the scheme and an amount of Rs. 779.18 crore released to States so far.

A Micro Irrigation Fund of Rs 5000 crore has been placed with NABARD. In the Budget for 2021-22 the corpus of the fund has been increased to Rs.1000 crores. Projects worth Rs 3970.17 crore covering 12.83 lakh hectares have been approved.

Mechanization is extremely vital to modernize agriculture and reduce the drudgery of farming operations. During the period from 2014-15 to 2021-22 (as on 31.12.2021) an amount of Rs. 5130.61 crore have been allocated for agricultural mechanization. 13,78,755 numbers of machines and types of equipment have been provided to farmers on subsidy. 16,007 custom hiring centres, 378 high-tech hubs and 16,064 farm machinery banks have been established.

During the period from 2018-19 to 2021-22 (as on 31.12.2021), an amount of Rs. 2440.07 crore have been released to the States of Punjab, Haryana, Uttar Pradesh, NCT of Delhi and ICAR for crop residue management. 39,398 Custom Hiring Centers (CHCs) of crop residue management machines have been established in these States and a total of more than 2.00 lakh machines have been supplied to these established CHCs and individual farmers of these four States.

In 18 states and 03 UTs, 1000 markets have already been integrated with the e-NAM Platform.

As on 05.01.2022, a total volume of 5.27 crore MT & 11.68 crore numbers (Bamboo, Betel Leaves, Coconut, Lemon & Sweet corn) with a collective worth of approximately Rs. 1.68 lakh crore of trade has been recorded on the e-NAM platform. To date, more than 1.72 crore farmers have been registered on the e-NAM platform

799 start-ups in the agriculture and allied sectors have been selected for funding of a sum of Rs. 86.64 crore in instalments and Rs. 37.90 crore have been released to respective KPs and RABIs for funding these start-ups. These start-ups were trained for two months at various agribusiness incubation centres i.e. Knowledge Partners (KPs) & RKVY-RAFTAAR Agribusiness Incubators (RABIs).

(xviii)   Promoting Use of Drones in Agriculture

The adoption of Drone technologies in agriculture has the potential to revolutionize Indian agriculture and ensure the country’s food security. Accordingly, looking into the unique advantages of Drone technologies in agriculture, the Department of Agriculture & Farmers Welfare has released the Standard Operating Procedures (SOPs) for use of drones in pesticide and nutrient application in public domain 21.12.2021, which provide concise instructions for effective and safe operations of drones.

In order to make this technology affordable to the farmers and other stakeholders of this sector, financial assistance @ 100 % cost of drone together with the contingent expenditure is extended to ICAR/SAU/ State governments/ State government Institutions under Sub-Mission on Agricultural Mechanization (SMAM) for its demonstration on the farmer’s fields. In order to provide agricultural services through drone application, financial assistance @ 40% of the basic cost of the drone and its attachments or Rs.4 lakhs, whichever less is also provided for drone purchase by existing and new Custom Hiring Centers (CHCs) under Cooperative Society of Farmers, FPOs and Rural entrepreneurs. The agriculture graduates establishing CHCs are eligible to receive financial assistance @ 50% or up to Rs.5 lakhs.

This information was given by the Union Minister of Agriculture and Farmers Welfare Shri Narendra Singh Tomar in a written reply in Rajya Sabha on 11 February 2022.

Scheme of Modernisation of Police Forces