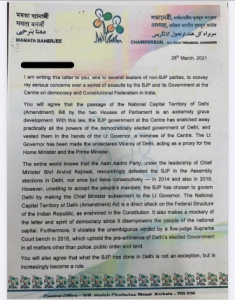 Parliament in the Budget Session 2021. In a letter to Congress chief Sonia Gandhi sent by the CM’s office on Sunday, March 28, Mrs. Banerjee wrote, “With the passing of this (GNCTD) Bill (now Act), the center has snatched away practically all powers of the democratically elected government of Delhi, and vested them in the hands of the Lt. Governor, a nominee of the center.” She jibed that the LG has been made an undeclared viceroy of Delhi, and is acting as the proxy for the Home Minister Amit Shah and Prime Minister Narendra Modi. As per reports, the letter was addressed to INC’s Sonia Gandhi, NCP’s Sharad Pawar, DMK’s MK Stalin, SP’s Akhilesh Yadav, Shiv Sena’s Udhhav Thackeray, among other opposition members.

The letter came a day after polls in WB were kicked off on March 27. Partaking TMC’s primary rivals in the election, the BJP, she said that the latter was spiteful of losing the Delhi elections to the AAP by a huge mandate. “The entire world knows that the Aam Aadmi Party, under the leadership of Arvind Kejriwal, resoundingly defeated the BJP in the assembly elections in Delhi n 2014 and 2018. However, unwilling to accept the people’s mandate, the BJP has chosen to govern Delhi by making the Chief Minister subservient to the Lt. Governor,” she wrote.

Mrs. Banerjee termed the GNCTD Amendment Act as a ‘direct attack on the federal structure of the Indian Republic’ and said that it mocks the democratic structure of the country. She further added, “The Act violates the unambiguous verdict by a five-judge Supreme Court bench in 2018, which upheld the pre-eminence of Delhi’s elected government in all matters other than police, public order, and land.”

The GNCTD Amendment Bill was given assent by the President on March 29 after being cleared in the Parliament in the last days of the Budget session that concluded last week. The Act allows the Lt. Governor of Delhi to supersede the directions given by the elected government. It also puts in place a system that allows Delhi’s ‘government’ to be defined as the Lt. Governor, and not representatives elected by the public.

According to the Act’s Statement Of Purpose, “In order to give effect to the interpretation made by Hon’ble Supreme 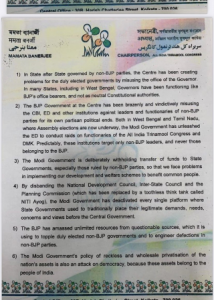 Court in the aforesaid judgments, a Bill, namely, the Government of National Capital Territory of Delhi (Amendment) Bill, 2021 seeks, inter alia, to clarify the expression “Government”, which in the context of legislation to be passed by the Legislative Assembly of Delhi, shall mean the Lieutenant Governor of the National Capital Territory of Delhi, consistent with the status of Delhi as a Union territory to address the ambiguities in the interpretation of the legislative provisions.”

In the letter, Mrs. Banerjee also listed out a variety of ‘attacks’ being done by the BJP-led central government on the state governments run by opposition parties. She alleged that by misusing the powers of the governor, the BJP-led NDA government was creating problems for state governments. She added, “Funds transfer to non-BJP run states is deliberately being withheld to reduce the pace of development.”

She concluded her letter by alleging that it was PM Narendra Modi’s ‘authoritarian’ conduct that had led to being worse than it ever was in the history of Independent India.” “There is a clear pattern behind all these developments. The BJP wants to make it impossible for non-BJP parties to exercise their constitutional rights. It wants to downgrade state governments to mere municipalities. In short, BJP wants to establish a one-party authoritarian rule in India,” Mrs. Banerjee added.