Mandela (2021): A Political Satire, But a Product of the Current Times!

Whilst showing the internalization of caste-based voting in elections, the recently released Netflix film is able to sidestep and focus on the neutralization of development as an agenda.

The film Mandela is a satire on the Indian electoral process, set in the background of Panchayat elections in Soorankudy village. Two opposing candidates belonging to rival castes, Vadakkoorans and Therkkoorans, 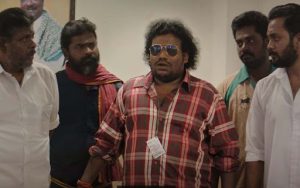 mobilize members of their caste through various strategies, including cash for votes. Tracing every villager of one’s caste affiliations, the 2 candidates find that they both have an equal number of potential voters. They fail miserably in trying to get support from voters from the other caste. The message is clear: Caste, cemented through cash for votes, makes elections irrelevant. The turning point in the film is when the local barber, Mandela, who is the lone villager belonging to neither of the castes, has got enfranchised. He now has the deciding vote. The rest of the film is about how the 2 candidates woo Mandela to win the elections. In the beginning, each one entices Mandela by providing “minimal support” (chair with wheels and mirror for his salon, and daily food). Mandela overwhelmed with inaams starts attempting to display his newly acquired significance toward the people not realizing that villagers are not merely customers, but also people with the caste identities, more dominant than his. Next, when Mandela tries to cross his “social” boundaries, he is shown his “social” place violently.

Afterward, Mandela, having realized that his sole vote still has power, begins using that power to ensure entitlements the marginalized within each of the 2 caste groups: women (toilets being built), children (schools being renovated), and disabled (roads being built). When candidates compete to make these changes, there is sudden transformation among villagers. People even return the cash taken for votes. Villagers even stand up for Mandela, against their community leaders, especially with the backing of the all-powerful politician father of both candidates. The key message from the film: development agenda-driven electoral process could even make the current mainstream election practice of “cash for votes” unnecessary.

The film demonstrates that the “cash for votes” system, in reality, flows from the greed for crores of bribes from industrialists that the office-bearer has access to after winning the elections. It very intelligently shows the role of the local MLA as an agent of Capital, which wants to set up the factory in the village. There is the powerful local politician, who refuses to sign the order for setting up a factory, despite the offer of a bribe. He is depicted neither as a good and honest activist in politics, nor as a dishonest unconcerned selfish politician, but as someone smart enough to know the knack of ensuring a balance: not allowing the global and extra local capital inside the village; and insulating caste from governance by ensuring that the contracts do go to an outsider, rather than either of the castes. He also has 2 spouses, one from each of the 2 dominant castes, which helps him have patronage from people of both castes. However, the agents of the industrialist penetrate cleverly, influencing every step of the political process: making his sons contest, making them invest in elections, and displaying the violence that is needed to win the power.

Local politicians are just shown as puppets of the overall structure and systems, where the Capital is building nexus with the state.

The film also shows that caste is not a matter of the past. It portrays how candidates enforce their dictum over fellow caste members in various violent ways. Further, it shows a kind of internalization among people of the imperative to have “own caste” person in power to garner entitlements for oneself. However, the film sidesteps the caste system. It rather resonated with the current mainstreaming of the development agenda as a neutral agenda. It envisions that an electoral process focusing on the development themes of sanitation, education, and infrastructure; wherein children could get the benefit without recognition of them as right-holders; women getting toilets, without the need to call out patriarchy, or the divyang getting resources without addressing the associated stigmatization. Don’t many of us feel that without struggle from women, disabled, and children, a benevolent political process would ensure their entitlements?

Interestingly, a film that sees the marginalization of women, children, and the disabled, refuses to instrumentalize caste. For example, Mandela is shown as an outcast. None of the two dominant castes is ready to accept him as their own. They needed Mandela when none of the members of either caste agreed to clean the public toilet. Mandela does not have a roof, a shelter; or any identity document, and even a name. The entire process of Mandela acquiring a name, identity document, and citizenship, through the efforts of a person, who does not belong to any caste in the village is an interesting take. And that the effort is through a government system (post office) is significant to denote that a willing bureaucrat could enfranchise a marginalized. On the other hand, the envisioned development agenda does not have space for taking on the caste system. Isn’t what the movie is depicting is actually the current mainstreamed belief system? Doesn’t a large section of society feel that people’s needs could be fulfilled without addressing casteism or patriarchy? How else will you imagine a situation where Government schemes ensure gas stoves, toilets, and taps in every home, but marginalized households, today, would not afford gas cylinders, their taps have no water; and their toilets are not functional?

Interestingly, like the Capitalist system, driving cash for votes through the mechanisms of bribes flowing from beyond the village, the feud between members of 2 castes, similarly, does not necessarily have origins within the village but resides in different institutions that govern the attitudes, practices, and cultural symbols. All through the film, one community tried to show the other community as inferior.

It is just not a coincidence that the more dominant community took coconut as its election symbol, very much a symbol of ritual superiority.

As a reaction, the other community takes the symbol of a road roller, intending to counter the ritual superiority. Symbols do have castes. Similarly, the film shows that members of both castes needed an outcast for cleaning the toilet; and none of them wanted to align with that act. It is the caste concept of purity and pollution, which makes a cleaning activity “unclean.” The question is why the film refuses to take on these symbols, and thus challenge the caste system; its origin and the drivers. There is no doubt that the Tamil Film Industry comes out with anti-caste films. But this film has chosen to take on the electoral system, independent of its caste and gender character. The film is a satire, which has taken for granted the need for benevolent capitalism. Although there are traces of communism of savarna forms, isn’t it true that the film locates the solution to degenerating electoral politics within the 4 walls of Brahmanical Patriarchy? In the end, the film Mandela is a product of these current times.