The Government of India’s move to privatize and auction off coal mines, mostly located in “High Conservation Zones,” may lead to the dispossession of traditional forest-dependent communities.

The Ministry of Coal (MoC), through a notification on  June 18, 2020, officially launched the process of auctioning coal mines, thus opening up the Indian coal mining sector to commercial operations by the private industry. The stated aim, according to the Government of India (GoI), of the move is to “enable the country to achieve self-sufficiency in meeting its energy needs and boost industrial development.” Industries that were earlier subjected to end-use restrictions (power, cement, iron, and steel, etc. that were notified by the GoI) can now utilize the coal extracted from the mines that were identified for auction for captive consumption or for sale, including export.

While claiming that this would bring capital investments into India amounting to INR 33,000 crore over the next 5–7 years, the GoI also claims that it would enable the creation of over 2.8 lakh direct and indirect jobs. Notably, the auctioning of the coal mines under the Coal Mines (Special Provisions) Act, 2015, and the Mines and Minerals (Development and Regulation) Act, 1957, is being carried outpost a January 2020 amendment, whereby the qualification of prior experience in coal mining was removed as a restriction to participate. Further, the move comes on the back of a decision by the Union Cabinet on August 28, 2019, allowing 100% FDI for coal mining under the automatic route.

It is important to note that multiple coal blocks that were auctioned are situated in areas that have been identified as “High Conservation Zones.” Many of these are concomitantly situated in the regions that are inhabited by Adivasi settlements (Figure 1). One of the ways through which dispossession of such zones is carried out is by pushing through with it in the name of development and taking over peasant lands without adequate compensation. The assertion by the GoI that this exercise would lead to the generation of over 2.8 lakh jobs is also to be contextualized in this regard. Of the 41 mines that were initially identified, only 7 were underground mines, with another 7 being mixed, that is, both underground and opencast. A majority of these mines are to employ opencast mining, which involves a higher degree of mechanization that is labor-throwing in nature as opposed to labor-intensive underground mining. Therefore, the argument that the above exercise would lead to the creation of 2.8 lakh direct and indirect jobs is questionable. The extent of formal employment at CIL in this regard is illustrative, with the number of such employees seeing a drastic reduction from nearly 4 lakh in 2010 to under 3 lakh in 2019 (Figure 2). 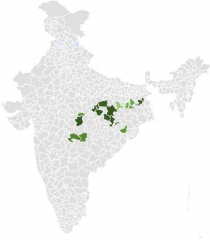 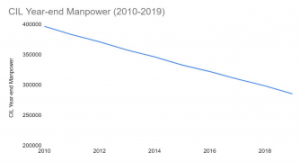 Additionally, the nature of these jobs remains to be seen. A cursory perusal of trends in coal mining employment in India reveals the extent to which mining and resource extraction consequently implies the exploitation of dispossessed local communities that are forced to eke out a living amidst a changing social, political, and economic situation. Millions of households are thus dependent in the coal-belt region upon either contract or subsistence mining with little to no hope of job security (Figure 3). A study sponsored by the NITI Aayog in this regard has gone on to state, “The intervention of mining has posed a serious question on sustainable livelihoods. People now depend on mining and allied areas for their survival but the issue at hand is what will happen once the mining activities are over in these areas?” The report goes on to note changes in societal relations due to the introduction of mining in forest-dependent communities including an increase in the preponderance of criminal activities, uptake in alcoholism, a perceivable shift to a class-divided society from a largely egalitarian one, and a general breakdown of village life. 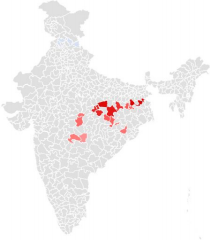 The availability of cheap resources is of utmost importance for the sustenance of the system of globalized production today. Thus, the opening up of the Indian coal mining sector to private investments needs to be situated within the process of resource expropriation from the global periphery. It must also be viewed in the context of loosening environmental regulations in India amidst record levels of disinvestment by the Government of India. Of the INR 4.67 lakh crore that the GoI has received by way of proceeds from disinvestment since 1991–1992 (as of November 26, 2020), INR 3.14 lakh crore (over 67%) has come since 2014–2015. The above, resulting in an increase in the rate of transfer of resources from the periphery, leads undeniably to the wanton devastation of the global South, seeing as to how it disproportionately bears the ecological costs of resource extraction.

The extent to which the move is driven by increasingly anti-coal sentiments elsewhere across the world, by enabling the substitution of higher-wage labor with cheaper labor from countries such as India—a process termed in critical theory as the “global labor arbitrage”—needs to be studied. The output per man-hours in the Indian coal mining industry is lower than that elsewhere. Expected to rise further with an increase in the uptake of mechanization, India presents an opportunity for the industry to capitalize on increasingly cheaper labor by forcing a race to the bottom. This trend of a divergence in output driven by increasing mechanization is evidenced in the figure below. 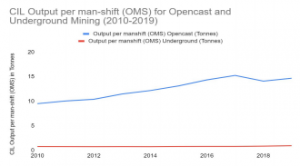 Fossil–fuel-driven growth has been an inescapable reality in the developmental trajectories of countries like India. On the flip side, private investments into the coal industry would effectively lock in fossil–fuel-driven emissions for the foreseeable future, owing to the need to make return over time on the investments made, thus denying the country the opportunity to transition away from the use of coal. This is the emissions dilemma India must navigate going forward. That said, it is doubtful that the promotion of private (including foreign) investments into coal would enable the furtherance of India’s developmental objective of attaining broad-ranging energy equity. The GoI is pushing ahead with the same even when projections indicate that growth in demand for coal can be fulfilled by coal mines that have been already auctioned or allocated. CIL in its Coal Vision 2030 document clearly states that

The total capacity of mines allocated/ auctioned (including CIL, SCCL, and NLCIL) as of date is about 1,500 MTPA at the current rated capacity. In view of the likely demand (base case scenario), there is  a limited requirement of starting new coal mines except the ones already auctioned/ allocated.

Additionally, the 37th Report of The Standing Committee on Energy has gone on to note that “Ministry of Coal has stated that CIL had adequate availability of coal and coal stock to meet the requirement of Power Sector.” These statements inevitably lend credence to the argument that the current move is an attempt to enable capital to tide over the increasingly intensifying barriers to accumulation it is faced with, by opening up newer avenues to stimulate investments.

India imported, according to provisional figures by the MoC, a total of 248.54 million tonnes (MT) of coal in 2019–2020. Of this, non-cooking coal was 196.71 MT whereas coking coal constituted 51.83 MT. While the former can be minimized to a large extent through existing domestic supplies as is indicated above, the same cannot be said for the latter, owing simply to the fact that India lacks adequate deposits of quality coking coal (Figure 5).

Figure 5. Distribution of Proved Reserves of Coal in India as of April 1, 2019. 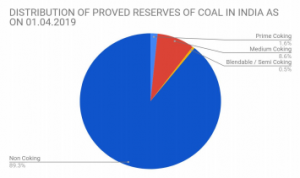 Therefore, while failing to achieve the stated aim of minimizing imports, the new coal block auctions could instead lead to the dispossession of traditional forest-dependent communities. 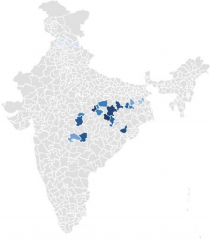 Most districts with coal blocks that were identified for auctioning have widespread forest cover as is indicated in Figure 6. It is in this regard that the GoI should instead look at locally relevant and sustainable ways in which employment and development opportunities may be brought to such states and regions. The above would ensure substantive ecological security by taking advantage of the existing local resource potentialities through measures such as forest-based livelihood schemes. This would also include existing legislation, such as the Forest Rights Act and MGNREGA, the rigorous implementation of which could generate employment and enhance the standard of living for millions of families who are otherwise in the throes of a complete social and economic collapse.

(This article is published as a part of the Smitu Kothari Fellowship of the Centre for Financial Accountability, Delhi)

The writer is a Research Associate at the Social and Political Research Foundation. He can be reached on twitter @NikhilMathew_

Mandela (2021): A Political Satire, But a Product of the Current Times!