Migrant Workers and Childcare in Thailand and Myanmar

Recent increase in female labour migration across Asia have triggered a surge of interest in how the absence of the mother and wife for extended periods of time affects the left-behind family, particularly children, in labour-sending countries. “Women as migrant workers have been discussed a lot, but the issue of social reproduction has been gravely neglected”, said Prof Kyoko Kusakabe, Asian Institute of Technology, Thailand. She was speaking at the 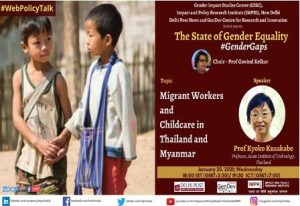 special talk “Migrant workers and Childcare in Thailand and Myanmar” organised by the Gender and Impact Studies Centre (GISC), Impact and Policy Research Institute (IMPRI), the Delhi Post and Gen Dev Centre for Research and Innovation.

Prof Kusakabe said that most of the literature reviews only talk about translational families and distance mothering and the plight of children left behind by migrating parents,but there is lack of discussion on the care arrangements for children who travel with migrant workers and the childcare strategies of migrants at the place of destination.It is often believed that migrating parents send school-aged children back to Myanmar to be taken care of, but the reality is somewhat different as having children at that place of destination actually affects the migrant workers’ capability of earning money. Hence the impact of childcare management is quite significant, which needs to be looked upon.

Various challenges are faced by migrants with regard to childcare in the place of destination, which are lack of established support network, poverty, need of earning money, high cost of living. And, mainly the thinking that housing and childcare is the sole responsibility of the women is the root cause of the problem.
Thailand is now becoming a hub for migrant workers due to the increase in the demand of work and labour shortage. Thus, the country facilitates workers from neighbouring countries to work there. Thai government since 2004 opened registration to facilitate workers from neighbouring countries to come to work in Thailand, also 80 per cent of migrant workers in Thailand are from Myanmar and rest from Cambodia and Laos. An important issue is that Thailand prohibits migrant workers children in the country. However, study shows that only 20 per cent of migrants leave their children under 15 years of age back home.

In terms of childcare patterns, many of the children are being taken care of by the migrant women themselves.

In these situations, they quit the job to have children at the place of origin, then return to work after some time. Further, most migrants not entitled to maternity leave and in places where the migrant community is strong, migrant workers can have children at the place of destination. It is like self-care child nursery, but it is not allowed by all workplaces. There are also times when women switch to low-paying jobs to balance childcare with work.

There are instances where childcare is being done by the husband at the destination and because of which the husband stays at home to take care of the children and quit the job.There are also examples of childcare by other women kin and relatives. There are multiple scenarios in which women relatives move to the destination and take up childcare. The kin or relatives are not mostly happy to live in a given situation. In these cases, most of the places already have labour shortage because of which it is often not possible to send the relatives or kin back to their place of origin. Although many people pay one-third of their earnings for childcare, sometimes it becomes too daunting because of the cost. The most popular childcare arrangement is to leave the child in the place of origin with other women relatives.In this case, remittance becomes an obligation for women as they fear that the children will not be fed well.

On the border of Myanmar, there is a practice of leaving the child with the monk in the temple. The child stays with the monks till he attains a certain working age. Also, in the cases where they leave the child alone at the place of origin, community people keep an eye on the children but do not take their responsibilities. Labour law in Cambodia and Myanmar stipulates that workplaces need to establish day-carecentres, but these day-carecentres lack maintenance and hygiene and thus are avoided by migrant workers. Further, those working in fisheries in odd hours do not fit with the opening hours of childcare centres. Moreover, high fees of such centres leave migrant workers with limited options.

On the other hand, migrant workers living in Bangkok finds child paid caretaker too expensive and prefer sending children back home.

Also Read : Migration, Migrants and the Right to the City

According to Prof Kusakabe the very heavy responsibility of childcare, which is solely on women, is a major issue. Moreover, the variety of childcare arrangements are complicated as without public support, women struggle to find a person where she can “delegate” care and delegation of care does not change the division of labour. Thus, proper childcare arrangement for migrant women needs to capture more varieties as maternity leave and creches cannot solve the problem. Not only there is need of changing the expectations on the role of women along with different values and preferences—shaped by identities, expectations and norms, economy, practices, etc.—but there is also an urgent need of support from employers for providing better working conditions and housing to migrant workers.

Prof Babu P Ramesh, Professor and Dean, School of Development Studies, Ambedkar University, Delhi, said that introducing a family background report system, as the one prevailing in Sri Lanka, will help the women to migrate easily as they will get a helping hand to take care of childcare requirements of the family.

Dr Ritu Agarwal, Associate Professor, Centre for East Asian Studies, School of International Studies, Jawaharlal Nehru University, added that in most areas not only the income of the women, but their mobility as well is controlled by the men in the family. Hence, there is a need to change these norms to have the right balance in society.

Prof Govind Kelkar, Executive Director, GenDev Centre for Research and Innovation, observe that childcare has become a responsibility of women even when they are earning and supporting their family. Thus, what options women have while working should be taken into consideration by the employers, who are supposed to help. It should be the duty of the state to address these issues andensure that such practices are terminated. Further, social perception that men’s responsibility is to earn for the family, while women are to take care of the family needs to be changed.

The authors are associated with the Impact and Policy Research Institute (IMPRI) , New Delhi.